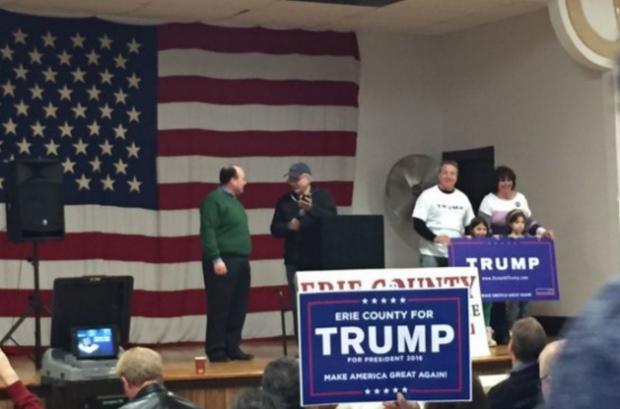 What happened in your life to turn you into such a dick? What part of your Christian faith enables your ignorance and lying?

You traveled to Washington to watch your leader, Donald Trump’s, inauguration, and in the process posted this: (The plural of “bus” is “buses”). You took to social media and purported to relay some statement that a cop supposedly told you as fact. How did you verify the truth or falsity of what the cop told you? Did you go and ask the protesters in those buses whether they were being paid? Sounds like nonsense to me. But before we even get to that, all I see is buses — no people. How do you know those buses transported protesters and not average spectators? This is hearsay on top of speculation — an absolute joke of a status.

Guys like you on the right have been spewing this lie for weeks about how the protesters are all paid for by George Soros, or whatever other bogeyman you’ve concocted. It’s completely and utterly false, but if you repeat the lie often enough, it becomes an immutable truth to the people backing the autocrat. Put another way, you and your ilk are completely incapable of engaging in meaningful or thoughtful debate about issues, so you instead make up lies about their illegitimacy. We know this because you spent over 8 years doing exactly that to our President, repeatedly calling him a foreign Kenyan un-American Muslim.

Utter stupidity, as it prompted responses such as this ignorant drivel: Assemblyman, do you believe it was a “COUP” as President Obama — a man you think is a foreign-born Muslim — handed the country over to a perverse madman? LOL, who knows? Your private pronouncements are routinely unbecoming of an elected official.

Enter Colleen Aungst, your constituent, who politely called you out on your ”rumors and fake news”. In response to your false and made-up garbage about buses in Washington and who was in them, she asks you — her Assemblyman — to “work MORE on uniting and getting work done and LESS on complaining and finger pointing.” Did you — an elected, sitting Assemblyman — respond graciously to the criticism? Did you ignore it? Or did you say, “screw you” to your constituent? We know you; we already know the answer. Now, let’s unpack this for a second. Aungst was calling you out for making up lies (or repeating lies) about buses that allegedly transported paid protesters. It had nothing whatsoever to do with your claims that the anarchist black bloc shoved you or your wife, or yelled nasty things that your daughter heard. What the hell does the bus post and Aungst’s reply to it have to do with your supposed interaction with anarchists at a major political event? That was the gist of Ms. Aungst’s reply, Another lie: you accuse Aungst of “defending” the anarchists who “attacked” your family, when she did no such thing. Aungst didn’t mention — much less defend — the actions of the black bloc, whom you claim you encountered on Inauguration Day. In fact, your fact-free lumping of the black bloc in with everyone who protested Trump’s inauguration is just a lie, as is your claims that they’re all paid by George Soros. (Also, it’s “you’re” — how does NYSUT justify endorsing you?!).

You’re a banal oaf who is allergic to the truth.

Barack Obama is a Muslim,” said DiPietro, former East Aurora mayor. “I don’t like the president. I think he’s a Muslim. I think he’s a foreigner to our nation. I oppose every principle he stands for.”

There’s nothing wrong with being Muslim — you’re just saying this out of race hate and birtherism.

You’re the same deceitful asshole who tried to defraud and cheat his own constituents by claiming Hillary Clinton voters could “text” their votes and stay home. If a Democratic elected official did something similar to try and fool Trump voters, you’d be howling with righteous indignation. But they didn’t — they respect the process and their constituents too much to try that. You? You’re an anti-democratic weasel.

It amazes me that you get the endorsement of teachers, since you’re such an outspoken proponent of hatred against Muslims, and you casually start hate campaigns against entire religions over a children’s book.

Let me make a prediction: at least one person will comment here or on social media with something about how you’re going to sail to re-election. This is probably true; you will. You’re safely ensconced in a predominately Republican district that was almost tailor-made for you. To sail to re-election, all you have to do is shout about downstate, about how much you hate Cuomo, and stick to your three main issues: guns, guns, and guns. A Republican Assemblyman from upstate is nothing more than a seat-moistening collector of time in the state pension system.

But sometimes, things don’t go according to plan. You have to answer to your constituents every once in a while. Perhaps many of them go along with you because of your stance on guns and whatnot, but if you’re exposed as the hateful liar you are, that might change. Who knows?

Go back to Albany and post dumb shit to your social media about how awful Andrew Cuomo is on taxation and spending while you collect your $80,000 annual public salary, plus an extra $9,000 “lulu” as ranking member of some small business committee, plus $172 per diem for Albany travel. Moan and whine about Obamacare while being on the rich and generous state employee health insurance plan. Have fun hating the state while banking in time towards a fat, state-tax-free pension.

And every time you badmouth an earnest constituent on social media, remember in the back of your withered mind that you’re a fake, phony, fraud.