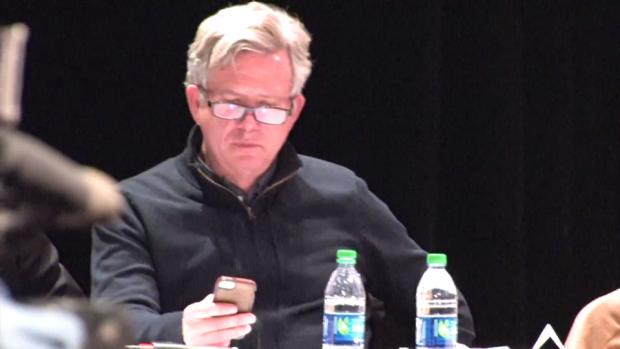 We’ll have more on last night’s pivotal Buffalo Board of Education meeting (short form: decisions on the turnaround plans have been delayed until February 11) in the coming days from our Shane Meyer and possibly others, but in the meantime we have to show you this:

That’s Larry Quinn, being called out for checking out of board meetings where the future of our community is being decided. And he’s callously ignorant of the fact. Quinn, along with the other four board majorty members, has been aggressively pushing a pro-charter agenda since he was elected to the school board last May. This was supposed to be his big night, but perhaps in response to a large community showing questioning the prudence of this matter, it was not to be. So like any stilted bride, he soothed his pain over wifi.

Perhaps we should be thankful when Quinn withdraws into the shadows, because when he speaks out he tends to make an ass of himself.

And kudos to the student-speaker, identified by the full version of his YouTube clip as Chronicle McClain, who may have a future in oratory.

Deeper into the devil’s details, perhaps no speaker made a stronger point on the fallacy of the data being pushed by the school board majority than Kevin Gibson, who pointed out serious concerns over Tapestry Charter School. Tapestry is poised to take over part of Bennett High School according to one of the currently tabled proposals. Here is his three minute presentation: