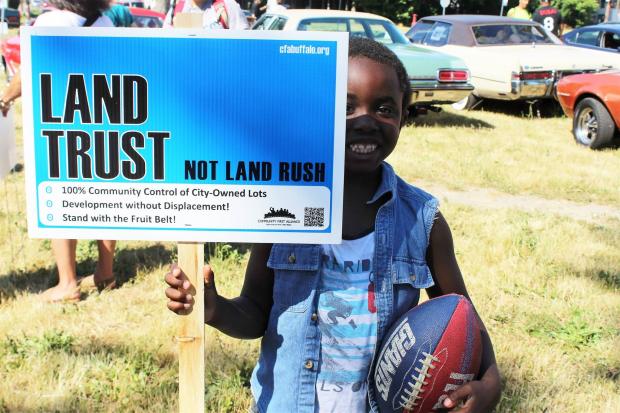 The region’s first community land trust is moving toward taking control of its first plots of land in the Fruit Belt neighborhood.

Common Council President Darius Pridgen brought the good news to the F.B. Community Land Trust, announcing on his radio show Friday that the city is preparing to transfer plots to the group for the first time.

“Those lots would stay in the hands of working class and low-income people,” Pridgen said. “Whatever that land trust, the community land trust, builds there as far as housing, for 99 years, 99 years, it cannot be transferred to wealthy people, it can’t be sold to other people.”

The land transfer would mark a significant step for the group, which was established last year to help keep the working-class, African-American stronghold intact as outside interests have moved into the area to capitalize on the expansion of the nearby Buffalo Niagara Medical Campus.The group, which is governed by a board of community stakeholders including residents and representatives from advocacy groups, has been pushing city officials to keep city-owned land in the neighborhood in the hands of longtime residents in order to keep them from being displaced as developers look to build housing and amenities for higher-income residents moving downtown.

Calls to Pridgen’s office and Mayor Byron Brown’s spokesperson were not returned by the time this paper went to print, but a city hall official, who was not authorized to talk about the matter publicly and speaking on background, confirmed that the city is in the early stages of identifying properties to be turned over to the land trust.

Harper Bishop, an economic and climate justice coordinator with the advocacy group Open Buffalo, said that these early discussions are encouraging to the community land trust and other organizations that have been working on affordable housing issues in the city.

“Up until this point, we had not heard Mayor Brown or his administration take a public position on the F.B. Community Land Trust, unlike Council President Pridgen who, after learning about [community land trusts], took a very public stand in favor of it,” Bishop said in an email.

It is unclear exactly how many of the approximately 200 city-owned lots in the neighborhood will be transferred to the land trust. Some of the city-owned properties are not developable; some the city would prefer remain available for purchase by adjacent homeowners. The city likely will also want, in concert with the community land trust, to create processes that help the land trust to succeed in its development plans, and to put in place conditions and safeguards in the event that it does not, so as to avoid the phenomenon of lots going undeveloped for years, as exemplified by those entrusted to St. John Baptist Church’s housing development arm.

But, Bishop said, the move toward helping the land trust secure lots is a signal that the Brown administration may also be willing to explore some of the more progressive housing policies outlined in a recently released study commissioned by the city.

“We are also interested in how this will connect to citywide work that the Community First Alliance is involved with and remain hopeful that the City will do the right thing and pass a mandatory—not voluntary—inclusionary zoning policy and think about a cabinet level position for a Director of Sustainability and other needs related to affordable housing in the study,” he said.