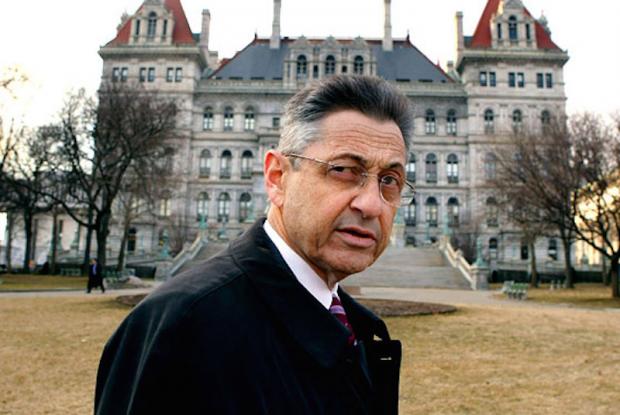 The news that Assembly Speaker Sheldon Silver would be arrested yesterday on federal corruption charges was followed almost immediately by calls for his resignation. Indeed, the first such demand came from a fellow Democrat, State Senator Brad Hoylman of Manhattan, who took to Twitter while the cuffmarks were still frssh on Silver’s wrists. A number of legislators joined in calling for Silver’s resignation today.

Silver’s guilt, or perhaps rather his degrees of guilt, will not be determined some time. (If the case of former State Senate Majority Leader Joe Bruno is any indication, it may be determined and re-determined.) Regardless of the outcome, the spectacle of Silver’s arrest—taken away in the back of a patrol car, his allegedly ill-gotten funds confiscated—may require Silver to step down from his leadership role and possibly his seat in the Assembly.

If that happens, who will assume the role he’s held for two decades as one of the fabled three men in a room? Who’s jockeying for position? Those who have attempted to unseat Silver in the past have been punished mercilessly, stripped of power and resources, so it’s a matter of assessing not simply who wants to be speaker but who has sufficient influence to rally the votes.

We polled some sources in the Legislature and came up with a list of candidates to watch:

—Assemblywoman Deborah Glick of Manhattan has several outstanding qualifications and one absolute prerequisite: She’s from one of the five boroughs of New York City. (Sorry, fellow Western New Yorkers and Middle Staters: There’s just no chance that any of the conclaves of New York City Democrats is going to split from there long-agreed preference for a downstate leader.) She has been in the Assembly for 25 years. She’s a woman, and there has never been a woman speaker. She is an unabashed liberal, which wins her support among influential unions and possibly from Governor Andrew Cuomo, who benefits from a liberal foil heading the Assembly and a Republican-controlled Senate, so he can appear to occupy the more popular middle ground.

—Assemblyman Carl Heastie of the Bronx and Keith Wright of Manhattan are also contenders. There has never been a minority speaker, either, and the powerful Democratic conclaves of Brooklyn, Queens, and the Bronx certainly must feel it’s time.

A couple of our sources added a couple of Joes to consider: Lentol of Brooklyn and Morelle of Rochester, though Morelle would need downstate support and some Republicans. That’s unlikely.

Silver may weather this scandal; he’s got a lot of friends and a lot of power. But federal law enforcement’s first goal when it brings a corruption charge like this is usually removal of the accused from public office. Remember Bruno; consider George Maziarz.

And consider that, according to one of our sources, there are a dozen or more case files on Albany legislators that were left open when the Moreland Commission folded. All that casework, the same files that led to Silver’s arrest, are in the possession of US Attorney Preet Bharara, who compelled the Cuomo administration to give him the commission’s work after Cuomo shut it down. Bharara seems determined to finish the commission’s work. He promised that there would be more arrests in the future, and I believe him.

(Editor’s note: An earlier version of this story included Assemblyman Karim Camara on the list of candidates. Camara recently left the Assembly to join the Cuomo administration.)