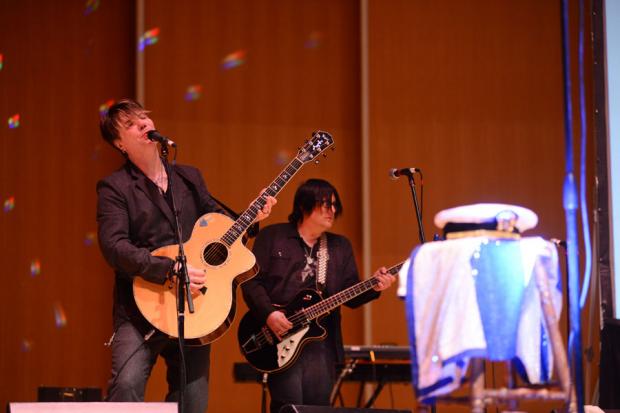 The sendoff and memorial for entertainer extraordinaire Lance Diamond would perhaps have both pleased the man for the outpouring of love in the room, and also made him blush a little at all the attention. He was, offstage, a humble man.

Known for his glimmering bedazzled suits that sparkled like diamonds under the white-hot lights of the stage, Lance was also known for his great kindness to friends, neighbors, and fellow musicians. Dozens took the elegant wooden stage of Kleinhans Music Hall on January 9 to pay tribute through recollections and musical tributes.

The event was emceed by vocalist Joyce Nixon, who was a nurturing force onstage, helping speakers get through their reminiscences by acknowledging the difficulty of expressing love and grieving in public. Later in the program she joined singer Caitlin Koch for a sexy rendition of the Bob Seger’s “Old Time Rock and Roll.” Nixon, just before the song, told the crowd that Lance would tease her about the inclusion of the rocker on her mostly-R&B set lists.

A highlight of the evening was the poetic and emotional performance of “Name” by Johnny Rzeznik and Robby Takac of Goo Goo Dolls—their 1995 hit from their album A Boy Named Goo. The duo, longtime friends of Lance, linked a live stream of the tribute on their site. Johnny told the story of how he played an early version of the song for Lance, who announced that the singer-songwriter and band were about to turn a corner. After the song there was a standing ovation.

Mayor Byron Brown presented a city proclamation, reading the document outlining the impact of Lance on the music scene. The proclamation, which touts “the boundless energy” of Lance, and states that his audiences “were part of the show,” ends with the declaration that heretofore January 10 is to be known as “Lance Diamond Day” in Buffalo.

Among other speakers Jay Bonafede, chief communications officer of the local branch of American Red Cross, praised Lance for his performances at their annual fundraiser, BASH. He stated that revelers oftentimes attended to see Lance and the 24K Diamond Band, and that Lance and bandmates helped to raise “$300,000 every year” for the non-profit.

Lance’s sisters, Paulette and Joan, spoke of their childhood and affirmed how he considered his fans family. Paulette called for one final standing ovation for Lance.

The tribute ended with the announcement of Lance’s work-in-progress, a recording of original material, including the song “Lancification.” The lyrics urge “come on y’all, let’s take a ride, everybody must get Lancified.” The tribute concluded with a large ensemble of musicians and singers who shared stages with Lance, the audience on their feet and the front row dancing.