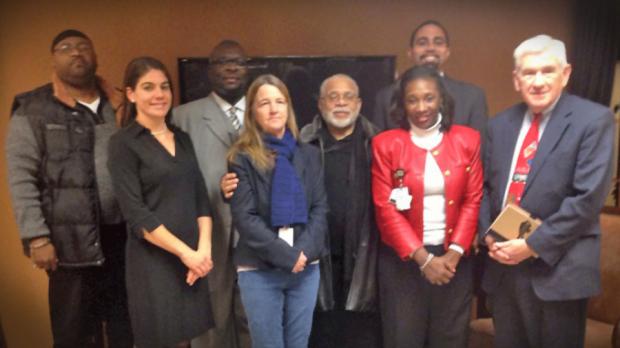 Members of the DPCC with outgoing commissioner John King
by
Shane Meyer
/ Jan. 12, 2015 12am EST

The Buffalo Parent Teacher Organization [BPTO] wants its voice heard and its recommendations taken seriously by the Buffalo School Board. The group is made up of parents and teachers from roughly 40 different schools, and it has started a petition to the BOE and Buffalo Public School District to include it in the district’s Parent Involvement Policy and in District Shared Decision-Making—the legally mandated means whereby community voices are heard by the Board.

According to the New York State Education Department Commissioner’s regulation 100.11, the school district must establish a relationship with an independent parent organization for the purpose of shared decision making. For Buffalo Public Schools, the parent organization is the District Parent Coordinating Council [DPCC].

However, the BPTO claims that the DPCC doesn’t represent its members and has proposed “that the District establish a Parent Advisory Education Committee [PAEC], made up of three parent-only representatives from each District-wide parent group.”

“The District is far too large and diverse to have one parent and one parent group represent the voice of all parents,” writes the BPTO in a recent resolution.

The rub, claims BPTO chair Larry Scott, is that the DPCC’s agenda aligns with that of the Board majority, in particular, with respect to its position on the privatization of public schools. Effectively, parents who disagree with the charter agenda are not represented.

“There are many parents, including myself, who have felt, for some time, that the DPCC doesn’t represent us as parents, and, it has become very apparent that they are aligned with the board majority and agenda to destroy public schools with privatization,” Scott wrote in an e-mail.

In response, Jennifer Bauer Walker, the vice president of the DPCC, told me that the organization has “no official position” on the issue.

However, in an appearance on WBEN’s Hardline with Dave Debo earlier this month, DPCC president Sam Radford was more enthusiastic about the prospect of the privatization of public schools.

“You need to tear it down,” Radford said of the Buffalo Public Schools in response to a caller who advocated for increased charter presence.

Radford also chimed in on the BPTO, opining that the organization is little more than a union proxy:

“I think that’s just an effort by the teachers’ union to undermine the effectiveness of our parent group.”

However, the BPTO suggests that it acts as a meeting point for teachers and parents, with the promise that collaboration will raise the profile of the Buffalo Public Schools’ successes and bring opportunity for improvements.

For instance, Scott praised the efforts of the turnaround plans presented by the four so-called “out of time” schools (Bennett, East, MLK, Lafayette), saying the plans represented the type of community collaboration that the BPTO can get behind:

“[The] Buffalo PTO endorses the redesign plans as developed by each school’s internal team and the public process which has occurred to create these plans and include the community.”

In his Hardline appearance, Radford dismissed the turnaround plans, while bemoaning that the district hadn’t gotten any applications from charters:

“[W]e haven’t been able to attract other people from outside of Buffalo to take a look at this thing, so we’ve got to really figure out how to take the local high performing charters and get them more involved and expanding and creating opportunities for children locally.”

When asked by Debo whether “you’re predicting more charter involvement regardless?” Radford responded, “No question.”

Scott’s praise for the public process behind the turnaround plans contrasts with Radford’s charter demagoguery: had charter operations submitted plans to the district, neither parents nor teachers would have been able to scrutinize them. The process takes behind closed doors, excluding the population whom they purportedly serve. In such a case, the DPCC has sold out its “stakeholders.”

Nevertheless, Radford baldly denies that there is a difference between charters and public schools:

It’s an astonishing position for the head of the only official parent voice to stake out—one that ought to make parents think twice about who’s speaking in their name.