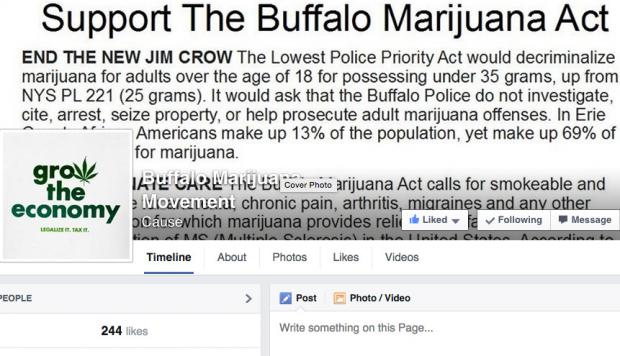 We usually spend our time on Mondays meandering through the haze of marijuana law and news from through the Union, where attitudes and economies are finally tilting a green, this week we’ll start locally.

Friends of the Buffalo Marijuana Movement reached out to us with data from the November 2013 study into the racial disparities in our criminal justice system written by Erin Carman for Open Buffalo in conjunction with the Partnership for Public Good. The data around marijuana arrests is particularly troubling, so much so that it supports a claim made by the Buffalo Marijuana Movement and others that selective marijuana enforcement constitutes a “new Jim Crow.”

In New York State, possession of less than 25 grams of weed is decriminalized as a violation, much like a parking ticket. Unfortunately, the above-referenced study doesn’t ferret out arrest made from the spectrum of laws, but that shouldn’t stop us from carefully inferring that the violation standard applies to at least some the 21% chunk of all drug-related arrests in Erie County.

How? Sadly, but not surprisingly, the number skew discriminatory:

The above data support that marijuana is often used as the gateway to probable cause, especially if the subject is black. The funny thing about marijuana odor is that any cop can claim they smelled it before conducting a search, but there’s no way to ever prove that it was smelled.

The Buffalo movement is seeking to move the Common Council in the coming months to ask for some leeway in progressivizing the city’s marijuana enforcement. The decriminalization movement is not just a pressing medical issue or an economic catalyst, it’s clear that it’s a civil rights issue.

The federal lawsuits filed by Nebraska and Oklahoma over Colorado’s expression of individual liberty and democracy always seemed to us as some form of envy for the Rocky Mountain version of freedom and small business growth. Now, those lawsuits have finally been challenged by the right.

A letter drafted by Republican state Rep. Mike Ritze and signed by six other lawmakers sent to the Attorney General Scott Pruitt defends the self-determination expressed by fellow Americans. The language is actually pretty inspiring for those disappointed in the selective regard for the constitution we’ve seen so much of in politics:

This is not about marijuana at its core — it is about the U.S. Constitution, the 10th Amendment, and the right of states to govern themselves as they see fit. If the Supreme Court can force Colorado to criminalize a substance or activity and commandeer state resources to enforce extra-constitutional federal statutes and U.N. agreements, then it can essentially do anything, and states become mere administrative units for Washington, D.C.

Our Founding Fathers intended the states to be laboratories of self-government, free to tinker and experiment with different ideas. The founders, from Jefferson to Madison, were also strong proponents of states nullifying unconstitutional federal actions. If the people of Colorado want to end prohibition of marijuana, while I may personally disagree with the decision, constitutionally speaking, they are entitled to do so.

Oklahoma had based their lawsuit on claims that marijuana being brought over state boundaries was draining law enforcement resources in the counties that border Colorado. But Ritze is openly scratching his head over these claims, “and found from numerous sources there is no statistical evidence indicating a significant problem with Colorado marijuana coming across Oklahoma’s border.” Ritze adds, “I would like the attorney general to show us where the problem is.”

Disappointing news for medical marijuana advocates and sufferers of epilepsy, multiple sclerosis, and PTSD in Illinois. Laws permitting the drug for therapeutic use have been on the books since August 2013, and deadline is looming as the incoming governor, Bruce Rauner, has openly criticized the plan.

The law, signed by current gov Pat Quinn, has taken heat for its long delays in granting licenses to dispensaries, a process that Rauner has claimed is overtly political and lacking in transparency.

An ongoing theme for this column: states are finding they are increasingly in unchartered legal and bureaucratic waters with respect to marijuana. And allegations of transactional politics involved with who gets licenses provide an obvious subtext to the hazy quagmire.