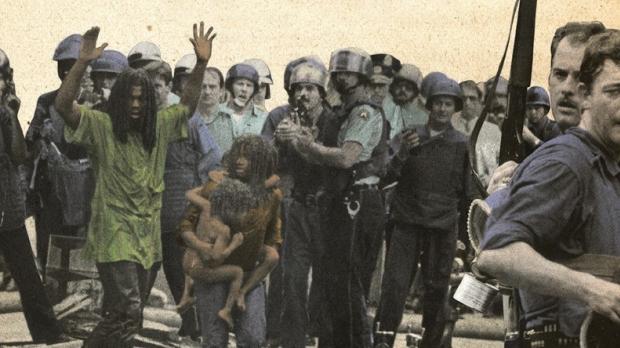 [FILM] One of America’s darkest recent chapters that many people have never heard about: In 1985 Philadelphia police dropped a bomb on the home of MOVE, a black liberation group then classified by the city as a terrorist organization. The bomb killed group leader John Africa and ten others, including five children. When the flames spread to neighboring rowhouses, firefighters on scene were instructed to “let the fire burn,” igniting 65 homes and lending the title to this award-winning 2013 documentary about the group and the 1985 incident. It’s a fascinating look at how an upstart political movement based on black liberation, animal rights, and an anti-technology worldview that sought a return to a hunter-gatherer lifestyle clashed with a militaristic big city police force. The film presents many ethical questions still very much in play today as the country begins anew to seriously confront police violence against people of color. The documentary provides a fascinating—if terrifying—window into the mid-1980s, with archival footage from key players from both sides of conflict and the resulting legal fallout. Burning Books bookstore will screen Let the Fire Burn next Wednesday.