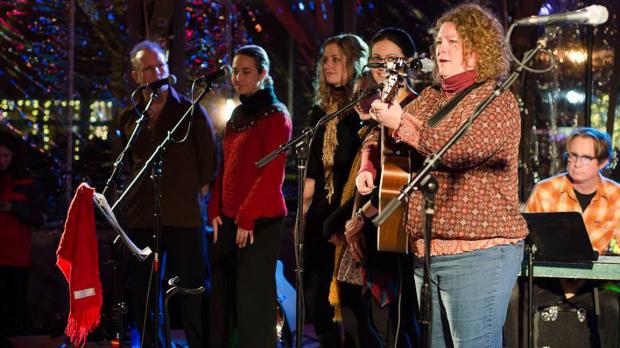 [MUSIC] Robot Holiday is not what it sounds like: It’s not when you shut down mentally and let the season roll over you, pretending to care, inside your bubble, looking perversely forward to the solitude of January and February. Indeed, it is the just the opposite: It’s a raucous, once-a-year, charitable collaborative effort by some of the region’s finest musicians to record original, nontraditional holiday music, commit it to CD, play it live at a big fundraising concert, and donate the proceeds of the whole shindig to the Food Bank of Western New York. The lineup of contributing musicians is impressive, and includes Dee Adams, Cathy Carfagna, Jonathan Hughes, Guillermo Izquierdo, Jony James, Joelle Labert, Doug Lambert, Rob Lynch, Alex Lynne, Katy Miner, David Mussen, Naryan Padmanabha, and Jim Whitford. This year the big concert takes place at Larkinville’s annual first Friday in December event, December 4, with opening sets of holiday classics from the Tins and friends along with DJs Shane and Tone of Verve Dance Studio. And because it’s Larkinville, there will be food trucks. Lots of them.