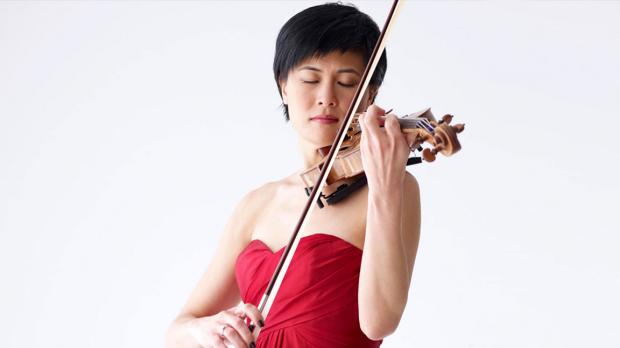 [CLASSICAL] Violinist Jennifer Koh, who solos with the Buffalo Philharmonic Orchestra under Music Director JoAnn Falletta this Friday morning, November 20 at 10:30am and Saturday evening, November 21 at 8pm at Kleinhans Music Hall, is a native Chicagoan who began her undergraduate studies at age 16 at Oberlin College as an English major, which may account for her literary approach to the work she performs this weekend, the relatively seldom heard Violin Concerto by Danish composer Carl Nielsen (1865-1931). She was introduced to the concerto when she was 15, and soon after she read Shakespeare’s The Tempest. She detected a close relationship between the concerto and the play. Her affection for Nielsen was immediate: the sense of humor in the last movement balancing and resolving the stormy drama of the first. Moreover, she became aware of a parallel structure between the concerto and The Tempest. “It starts out very stormily let loose by Prospero’s magic, and eventually has a sweet and happy ending with Miranda getting married. As I was studying the piece I was reading The Tempest and was shocked by the form, because it was so dark and dramatic, filled with longings for revenge in the beginning. There are intimations that it could be a tragedy. But it evolves into this very simple ending, instead of everyone dying, like in Macbeth or Hamlet. I believe in this piece. I do love this piece.”

Koh’s performance of the Nielsen is only the second time it has appeared in the BPO’s repertoire, and it has been over two decades since it was last heard. Edward Elgar’s (1857-1934) Enigma Variations, the concert’s finale, has enjoyed a much different fate: This will be the 14th time the BPO has performed this arguably most popular of Elgar’s works. And to start, Tintagle, a tone-poem by Arnold Bax (1883-1953), the first work of his to achieve any popularity. It takes it name from a castle on the Cornwall coast.  That area was inhabited since Roman times, but the castle, situated on an island and built in the 13th century, is now mostly ruin. Arthurian legends are tied to the place, and it is the disembarkation point for Wagner’s Tristan and Isolde.  But Bax eschewed any specific program for the work, eliciting instead the echo of events long forgotten as the Atlantic’s wind and waves crash against the castle’s perch.