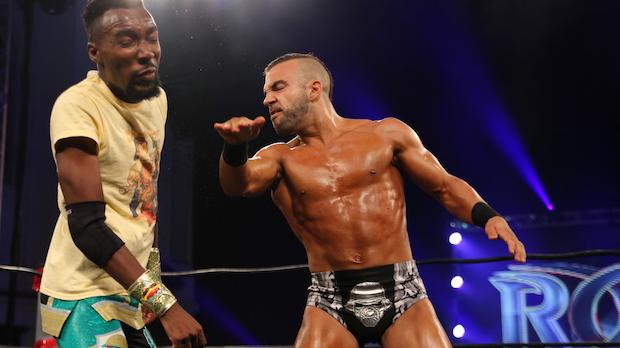 Interview: Will Ferrara of Ring of Honor Wrestling

[WRESTLING] Always fighting against the odds, Ring of Honor (ROH) Wrestling has slugged it out over the past 15 years to become the number two wrestling promotion in America behind the WWE. With its in-ring action first approach, ROH has been the breeding ground for stars like CM Punk, Daniel Bryan and Kevin Owens who later became champions in the WWE. And while competing promotion Impact Wrestling (F.K.A TNA) has squandered any momentum it’s gathered over the past decade plus, ROH’s measured approach never allowed it to gather the moss of a product past its prime. Now with a wide reaching television syndication deal through owning company Sinclair Broadcast group and a partnership with New Japan Pro Wrestling (NJPW), ROH seems ready to breakout not as a direct competitor to the WWE, but as its own “hip” cultural phenomenon devoid of the child centric focus of the McMahon empire.

The heart and soul of ROH’s appeal is its ever evolving roster. One of the men behind that evolution is Will Ferrara, who competes as part of The Dawgs tag team with Rhett Titus and moonlights as a trainer at the ROH Dojo, where the next generation of ROH stars are being crafted. The Dawgs and a litany of ROH stars, including Bullet Club members The Young Bucks, Cody (aka Cody Rhodes) and Kenny Omega, will make their debut at Buffalo RiverWorks to kick off the Border Wars tour on Thursday, October, 12, which will also include top wrestlers from NJPW. Ferrara, 26, spoke to The Public about the rise of ROH, his tag team with The Dawgs and his plans to take in Buffalo before the action on Thursday night.

Ring of Honor has a widely syndicated television show and seems really entrenched as the number two wrestling promotion behind the WWE, although there is rising competition. What do you think makes Ring of Honor unique as a wrestling product in the expanding wrestling marketplace?
I think now is a great time to be a wrestling fan because there are so many great choices to choose from. When you choose Ring Of Honor you know that you will always be getting bell to bell the best wrestling on the planet, and that is what makes ROH unique. Since its inception, ROH has been the battleground for the top wrestlers in the world. Being in this locker room forces you as a competitor to always improve on yourself if only to keep up with the ever increasing standard. Add in a working relationship with New Japan Pro Wrestling and CMLL in Mexico, you know that you have to be on point, every time, if you want to earn or keep your spot. This translates into ROH every match, and produces a unique product that fans can’t get anywhere else.

You’ve been known as a technically sound and tenacious athlete since arriving in Ring of Honor in 2014, but it feels like you’ve really been able to demonstrate your personality lately as part of The Dawgs (The Dawgs recently debuted a Fear and Loathing… based look). Do you feel that teaming with Rhett Titus has allowed you to expand yourself as a character in Ring of Honor? How do you envision that impacting your career going forward?
Teaming with Rhett brings out my personality because the dynamic we display is as real as it gets. Since I have been a part of Ring Of Honor, Rhett has been my travel partner. Countless hours on the road together developed a chemistry that carries over into the ring. Rhett does get on my nerves, a lot, but I also know that when it comes down to it he has my back. Being in The Dawgs allows me to be more comfortable and have more fun out there, and I think that is what the ‘tenacious technically sound’ Will always needed to do. Going forward, I envision taking the ROH tag division by storm. Rhett is a former ROH World Tag Team Champion, and the both of us are hungrier than we ever were before.

You are an assistant trainer at the Ring of Honor Dojo. What are some of the rewarding and exciting elements of training people to wrestle?
Being able to help people chase and live out their dreams is easily the most rewarding part of being a trainer at the ROH Dojo. Delirious (ROH executive Hunter Johnston) and the ROH Dojo were extremely influential in my career and my success so I’m grateful for the opportunity to be able to pay it forward to the next generation of students. It’s exciting to see Dojo graduates like Ryan Nova, Stella Grey, Eli Isom and Dylan Mesh begin their pro wrestling careers after watching all of the hard work they have put in since beginning training at the Dojo. The environment at the ROH Dojo encourages everybody to succeed, and not to compete with each other but to compete with one’s self.

As a native of Queens, you probably at least know some transplants from your city to Buffalo. What are your impressions of our city?
I have been to Buffalo a few times before, but never had the opportunity to experience the city. I love the Buffalo wrestling fans, so if their attitude translates to the city I’m sure it’s a great time. Being that 4 nights of Global Wars kicks off first in Buffalo, I think the “Big Dawg” Rhett Titus and I are gonna get in a day early to hit the town. You can expect that we’ll find the gym, the bar, and some of Buffalo’s finest wings.

What should fans expect from the Ring of Honor show in Buffalo on October 12?
I want fans to know that if they are attending Ring Of Honor in Buffalo, they will get an experience like none other. Everyone on the roster is going into this Global Wars tour more motivated than ever, and as a fan you get the rare opportunity to see ROH and NJPW stars collide. The Dawgs know that the world will be watching, and we plan on pulling out all the stops against our Buffalo opponents Coast 2 Coast. From opening match to main event, know that Buffalo will get the best wrestling on the planet.