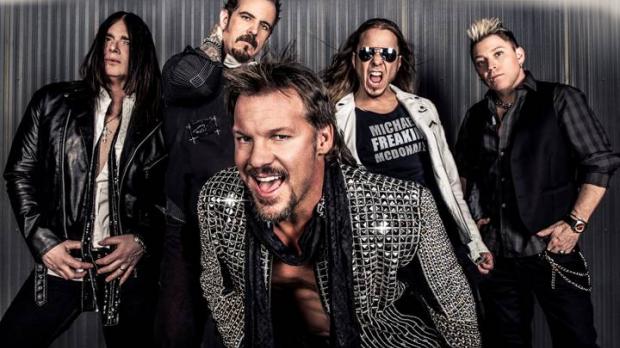 [ROCK] If you are looking for 2017’s hardest working man in show business (and who isn’t?), don’t overlook Chris Jericho, the pro wrestling superstar who’s star is burning brighter than ever 27 years after he debuted as a wrestler. That has a lot to do with how prolific and successful Jericho has been outside of the ring, where he has become a best selling author, an acclaimed podcaster, and the name behind the recently announced Chris Jericho Cruise that caters to fans of rock music and pro wrestling. Meanwhile, Jericho (who recently spoke to The Public) still had a banner year as a pro wrestler for WWE, engaging in an entertaining friends-to-enemies storyline with Kevin Owens that culminated with a Wrestlemania match in April. But Jericho’s biggest victory this year has to be the chart topping single “Judas” from his hard rock band Fozzy. Fozzy has steadily grown in profile since forming in Georgia in 1999, and with the catchy “Judas” getting national radio play and over nine million plays on YouTube since May, it looks like Fozzy is about to step up in weight class in the world of rock and roll. Fozzy (“We’re Van Halen in 1979, that’s our mentality when we are on stage”) makes its way to the Rapids Theater in Niagara Falls on Tuesday, October 3 with supporting acts Gemini Syndrome, The Stir, and Optic Oppression.

Jericho spoke to The Public about the band, his new book, and the time his dad publicly shamed in him in Buffalo during an episode of WCW Thunder. Fozzy’s new album Judas comes out October 13.

You’ve written a few biographies already but I’m particularly interested to see that your new book No Is A Four Letter Word is more of a self help book. What inspired you to go in this direction as an author?
When I decided to write the book I wanted to focus on lessons that I learned, not just as a kid but through my whole life on how you can achieve your goals no matter what they may be, no matter how fantastic or unattainable they may be. So I went through it and created 20 principles from things that I’ve learned from people.

Have you seen these principles manifest themselves in your work with Fozzy?
Have I seen it? Absolutely. Now, with “Judas” being number one on rock radio four weeks in a row, I mean that is the perfect example. It’s one of those things where you have to understand the abilities that you have and the talent that you possess, and if it’s there for you and you have the will to get it done, then you owe it to yourself to move forward so it happens. And with Fozzy, I think a lot of times we’ve had to work twice as hard to get people’s respect just because I’m in the band. So there’s a little bit of a curiosity factor and there’s a little bit of a prejudice against us—that we’re not going to be any good with a wrestler singing.

There’s a Buffalo musician who’s kind of pulling a “reverse Chris Jericho” by starting off in a successful rock band and transitioning to pro wrestling. Andy Williams, the guitar player from Every Time I Die, has been working some independent promotions in the Northeast and Ontario. What kind of advice would you give to someone like him?
If that’s what he wants to do, and he feels it’s within him to do it, I say go for it. Paul Stanley said something in this documentary [The Decline of Western Civilization II] that stuck with me since I was 15 years old. He said, “The only people who are going to tell you that you can’t make it are the people who failed. I’m not going to tell you you couldn’t do it.”

Do you have any anecdotes or funny stories from your travels through Buffalo?
The best Buffalo story I can remember is that was the place in WCW when I was playing this real complain-y, whiny character. And I was cutting this promo on [on-screen wrestling executive] JJ Dillon. And suddenly from out in the back, my dad [NHL player Ted Irvine] came out and started cutting a promo on me, how I was such a disgrace to the family and all this stuff. I just remember that in WCW, there were really no writers, and my dad sat in the corner and wrote his promo of what he was going to say. And there were no rehearsals back then. It’s so crazy when you think about it: It’s basically this guy who’s never been on wrestling ever just coming up there and cutting a five minute promo. He killed it, man, he nailed it. And I’ll always remember that [on-screen and real life boss Eric] Bischoff didn’t think he’d be able to pull it off and he went out and killed it. And not only did he kill it, but they never sent him the check, they never paid him.