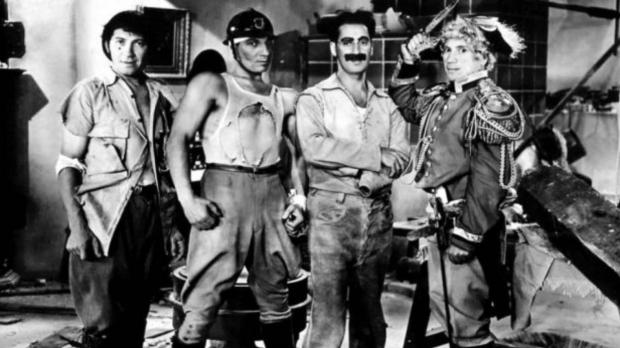 The Marx Brothers in Horse Feathers and Duck Soup

Doesn’t anyone want to laugh anymore? I know it can’t be just me who yearns for the experience of sitting with a group of people I don’t know and sharing an evening of chuckles, chortles, snickers, titters, giggles and the occasional big fat belly laugh. But of all the ways that Hollywood has let us down in the 21st century, this has to be the biggest: where are all the comedies? Look at the movie listings and there are words you’ll see over and over again: horror, suspense, thriller, action, adventure, sci-fi, once in awhile drama or documentary. But just about the only time you’ll see “comedy” is trailing after “animated.”

That’s why I was so happy to see that the Hamburg Palace theater, which if late has largely been showing Hollywood classics, has booked a Marx Brothers double feature for this weekend, Horse Feathers (1932) and Duck Soup (1933). In terms of screen comedy, you don’t get much funnier than Groucho, Harpo, Chico, and, yes, poor underappreciated straight man Zeppo. And you won’t find Marx Brothers movies funnier than these, the last two features they made before studio head Irving Thalberg saddled them with romantic subplots and songs in the service of bringing them to a wider audience. To which I say, if it took Kitty Carlisle and Allan Jones making googly eyes at each other and warbling tunes that didn’t even have the decency to be written by Irving Berlin or Jerome Kern to get you to come see the Marxes, well, you didn’t deserve them.

The Marx Brothers were always at their best against a staid and stodgy backdrop: Horse Feathers takes place on a college campus, Duck Soup in the halls of power of a fictional European country named Freedonia. It is said that the mayor of our neighbor city to the southwest complained about the use, albeit with an extra “e,” of the name Fredonia. To which Groucho replied: “Your Excellency, our advice is that you change the name of your town. It is hurting our picture. Anyhow, what makes you think you’re the Mayor of Fredonia? Do you wear a black moustache, play a harp, speak with an Italian accent, or chase girls like Harpo? We are certain you do not. Therefore, we must be Mayor of Fredonia, not you. The old gray Mayor ain’t what he used to be.”

For those of you who have seen the Marxes in batches on TCM and have trouble recalling which movie is which, Horse Feathers has Groucho singing “Whatever It Is, I’m Against It” and “Everyone Says I Love You,” Thelma Todd as the college widow (there really used to be such I thing: I looked it up) and the funniest football game ever put on film. All it’s missing is Margaret Dumont, a lack made up for in Duck Soup, in which Groucho sings “These Are the Laws of My Administration,” Harpo wages a running war with popcorn vendor Edgar Kennedy, and Groucho and Harpo do a pantomime routine involving a missing mirror (video clip below) that I’ll still be laughing at years after I’m dead.

The seats are reasonably comfortable, the tickets and popcorn reasonably priced, and you’ll be helping support one of the last independent movie houses left in the area. And the more of us there are in the audience, the funnier it will be, because laughter is that way. Showtime is 7 pm on Friday and Saturday nights.