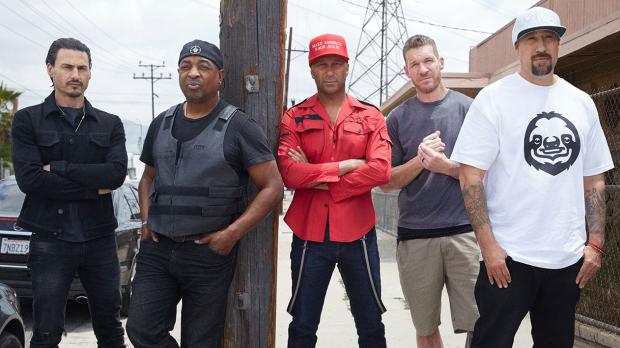 [ROCK] Like a Justice League of social warriors, the Prophets of Rage have assembled as if in response to a political distress signal. Combining the firepower of the rebellious Rage Against The Machine, the sharp-tongued Public Enemy frontman, Chuck D, and the loose rhymin’ of Cypress Hill’s B-Real – the Prophets began their tour in Cleveland in repsonse to the Republican National Convention. They’ve since peddled their #MakeAmericaRAGEAgain and #TakeThePowerBack mantras across the country, donating their earnings to various charities and playing for all kinds of audiences, including prison inmates. With the disorienting haze of racism and corruption that’s plagued our political landscape, the Prophets are both the refreshing glass of ice water and the gasoline igniting a revolution. First there’s Cypress Hill, one of the earliest groups to bridge the gap between Latino rappers and the mainstream in the late 1980s – while making “marijuana” less of a swear word. Around the same time, Public Enemy shed light on the systematic discrimination of minorities via bold lyricism, while Rage Against The Machine took on a corrupt corporate America by way of their own reckless brand of rock. Almost 30 years later, and these guys still resonate. Perhaps that’s why lyrics cut from Public Enemy’s “Fight The Power” fit so well into Prophet’s single, “No Sleep Till Cleveland.” The live recording’s rock backdrop tones down the funky twang of the original Beastie Boys tune, and the deep vocals coupled with Tom Morello’s take on Kerry King’s iconic solo is extremely powerful. The Prophets’ debut EP, The Party’s Over drops on August 25. Catch the Prophets of Rage on Wednesday, August 31 at The Rapids Theatre.