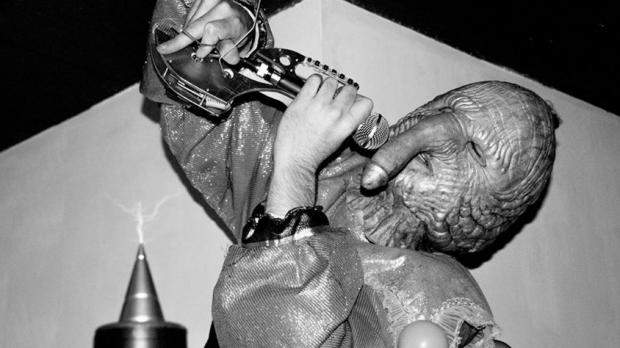 [ELECTRONIC] Dr. Reecard Farché, better known as Anklepants, wants you to form your own conclusions about the behemoth phallus that he has designed to dance upon his face. As an internet obsessed culture in lust with forming and displaying our own manufactured opinions, the invitation serves as a bit of brilliant modern marketing. While it’s unclear whether each audience member’s long gaze into the tip of the animatronic timber will translate into enjoyment or disgust, for many it will undeniably work as a sort of mandatory prompt to form a personal stance on the matter. Come to think of it, I seem to be falling under the same subtle spell as I write these very words by focusing on the spectacle protruding from his face. But what other option do I have? Am I supposed to obstinately ignore the elephant dong in the room? If it ended there, with a shocking cock mask and a bit of techno music, Anklepants would be nothing more than another attention seeker whose allure wears off as soon as one’s eyes adjust themselves to the phallic display. The breadth of his work, however, extends far deeper than that of a masked busker. Just moments into our conversation it becomes clear that this self-prescribed Doctor has earned his title.

Unlike many modern lap-top based performers, Farché isn’t simply triggering pre-recorded loops and bouncing around like a mechanical rodeo clown; his sound correlates directly to his physical movements as they communicate with personally programmed sensors located all over his body. “When I’m moving around and stuff it’s not like some dance moves; the microphone’s got sensors, I’ve got sensors on my hands so I have to coordinate it all. It looks manic but that’s the nature of it all,” says the Australian musician on a long distance phone call from his home in Germany on the eve of his first trip to the United States. Farché speaks honestly and naturally and carries himself in an almost conspicuously mellow manner considering the nature of his dramatic appearance on stage. He is self-aware enough of the absurdity of his persona to joke about it, but quickly points out the strengths that might otherwise go unnoticed if one were to fix all of their attention on the visual display. “Of course it’s a dick-face character, but as for the moving around it’s just a means of manipulating the voice and the sound. It seems intense but that’s because I’m doing a lot of shit. A lot of people probably think that I’m just doing all these weird maneuvers but I’m actually doing stuff. Most of my live session is all software that I’ve written. All the hardware; I’ve built everything. So it’s not like you can go on a tech-support website and go like ‘Hey, why isn’t this working?”

Combined with his technological prowess are Anklepants finely tuned vocal skills. He explains that his set relies so heavily on subtle vocal cues he can’t afford even to puff a bit of smoke while on the road in order to preserve the strength of his voice. “There’s quite a lot of songs where I’m actually singing, singing. For an hour I always warm up my voice properly. If I don’t, I really fuck it up and I won’t be able to talk the next day. I suppose just like any singer I have to try and take it a bit seriously.”

As one might expect, Anklepants’ live performances have earned a wide variety of reactions ranging from ecstatic enjoyment through violent disapproval.

“I had one dude who pulled the main power out of my rack so I chased him and tackled him from like 50 meters away. Then, recently in Australia someone threw a pint glass at my head. I have fiber glass under the mask; the top half of it is fiber glass, so luckily that was there because it would have definitely knocked me out. Then it hit the motion sensor in my laptop so the machine just turned off. People thought that I had turned it off but I didn’t and then it wouldn’t reboot for like half an hour.”

This tour to the United States marks Dr. Reecard’s very first time in the country. Fortunately for him, Buffalonians are generally known for their stance against violently heckling foreigners. He’ll come to Sugar City on Sunday, June 28 for not only a live show, but a live music video-taping, presented by Lesionread and Squeaky Wheel. Warped techno producer Ay Fast and electro-noise-maker Logan Locking will play in support.