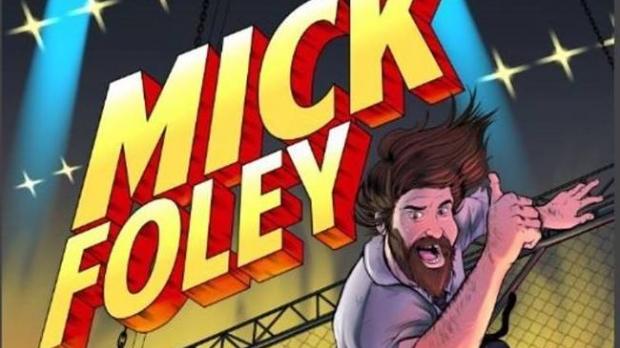 Pro wrestling fans like to debate over who the true “tough guys” of the business are, the ones who could beat anyone up in a legitimate contest or real life situation. The most common chart topper is Tongan powerhouse Meng, who according to legend has effortlessly popped out eyeballs and bit off noses in real life fights.

More relatable to the common man, perhaps, is a wrestler like Mick Foley, who is known for the shocking damage that’s been inflicted on his body much more than anything he’s done to a foe.

It makes sense then that Foley would connect so intimately with wrestling fans, who can empathize with the sacrificial nature of Foley’s work. Few of us will know the rush of gorilla pressing a grown man overhead like the Ultimate Warrior, but many of us can relate to the  physical and emotional agony that Foley expressed so intensely.

Ever giving to his greatest rival, Foley points to the Undertaker when he thinks of real toughness in pro wrestling.

“They say there’s nothing tougher than true gentleness and nothing is more gentle than true toughness. And sometimes it takes great toughness to love unconditionally. That’s probably taking things in a different direction, and I’ve heard all the stories about guys clearing out bars…

But for my money, the Undertaker showing up that night (at Hell in a Cell) with a broken foot in one of the most dangerous situations ever devised, making the most of the situation and never letting on to the public that he was anything less than 100 percent was about as great of an example of toughness as you can get,” Foley said.

That legendary 1998 Hell in a Cell match, a touchstone moment preserved in pop culture lore, is the sole topic of Foley’s 20 Years of Hell storytelling tour, which comes to Helium Comedy Club on June 14.

The Hell in a Cell match with the Undertaker was an unprecedented spectacle of violence for mainstream pro wrestling. Foley, as his twisted Quasimodo-meets-Hannibal-Lecter Mankind character, was thrown off of the 20 foot tall cell through a ringside announcer’s table in a historically dangerous moment. Foley’s continuation of the affair, which included an even more excruciating plunge through the ceiling of the cell into the ring, was both superhuman and void of humanity.

Foley, who pioneered the “retired wrestler tells stories on stage” genre that many of his peers have latch on to over the past decade, says a favorite musician inspired him to focus on one specific topic for his current tour.

“I was just inspired by Bruce Springsteen doing the tour of ‘The River’ and I thought I would like to do something to commemorate a specific event so the fans would have a better idea of what to expect,” he said. “To this day they really don’t know what they’re going to be seeing. I’m very thankful that they have faith in me, because I think some of the fans think I’m going to show up in a bow tie and tell bad one liners. But it’s a storytelling show, and making it specific to one match really allows me to take people for a ride.”

In many ways, the liberal and personally reserved Foley is an outlier in the pro wrestling world. In a realm where the biggest egos and most pumped up physiques muscled their way to the top, how did Foley, a man of modest spirit and body, become a top tier legend in the industry? It’s a question he often asks himself.

“I didn’t have any of the prerequisites you usually need: I didn’t hunt, I didn’t fish, I drove a 2002 Chevy minivan, I didn’t have a cool dog, I only had one tattoo,” Foley said. “And somehow, while not being an alpha male, I managed to make my presence known in other ways and get across the ideas I had for matches in a convincing manner.”

Those “other ways” likely include Foley’s sharp wit, verbal command and demonstrated ability to draw money. Money was the motivation behind one of Foley’s other legendary displays of wrestling masochism, which took place during the extremely bloody and insane 1995 King of the Deathmatch tournament in Kawasaki, Japan for IWA Japan. Foley would win the tournament in a “no rope barbed wire, exploding barbed wire boards and exploding ring time bomb death match” finale against his wrestling hero and friend Terry Funk.

“Until that point, I had felt that I had proved a lot in the wrestling businesses, but I didn’t feel that I had proved conclusively that I could draw money.There was always a sense (when working for) WCW that the carpet was always going to be pulled from under you, that you were never really given the chance to take the ball and run with it,” Foley said. “And I was given the assurance that if I went on that tour, I would be given that ball. So I ended up running as fast and as hard as I could with it it, and Terry Funk and I ended up drawing money and making history, and erased that doubt from my mind.”

Foley won the King of the Death Match tournament as his original character, the wild eyed New Mexican maniac Cactus Jack. The “Cactus” character had carved a violent reputation through years of exposure on national television in the early to mid 1990s. At the time, little was known about pro wrestlers’ real lives. Foley’s existence as a Christmas-obsessed, genial family man was his secret when he went out in public, who simply saw the intimidating Cactus Jack.

“Yeah that worked in my favor, and at the time we were encouraged to play up our characters in public. I got a lot of strange looks, and I even had some people moving out of business class seats to avoid me, and I think that was one of the reasons I enjoyed being up there so much,” Foley said. “The best characters are extensions of our own personalities that we can dial up to 11. So I was able to tap into a little a bit of a wild side and dial it up. And to this day, when I do this show, I’m able to turn back the clock 20, 25 years and slip in and out of these characters pretty easily.”