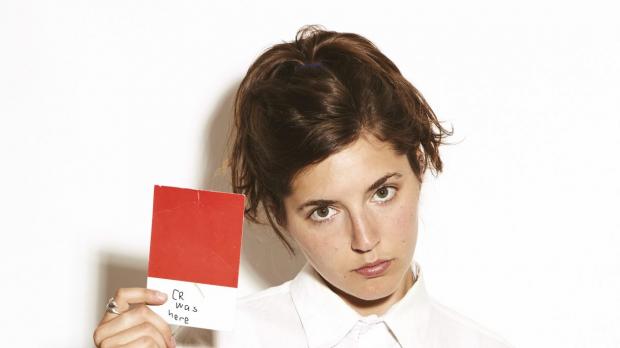 [ROCK] Singer-songwriter Caroline Rose is quite the enigma of the music landscape. She was born in Long Island to visual artist parents and she started writing songs when she was 13. Growing up, she cites the Dave Brubeck Quartet, Chris Isaak, Buddy Guy, and Ace of Base as some of her favorite artists that inspired her to play music. In addition to her love for music, she was also a theater geek, which totally makes sense after watching her music videos—most of which she directed and plays multiple eccentric characters in. Rose’s first two albums: 2012’s America Religiousand 2014’s I Will Not Be Afraid give off a much different vibe than her latest album, 2018’s Loner, which she co-produced with Paul Butler. Moving away from her roots in American folk music, country, and rockabilly, this time around she ventured more into the world of pop and alternative rock. She also played the majority of the instruments on the album, even though guitar and keys are her strong suits. Rose will be performing at Iron Works on Wednesday, May 8 at 8pm with opening act Kississippi. The Public talked to Rose about what it’s like to play music and go on tour with her best friends, her music-making process, and how she’s finally starting to overcome her fear of not having enough time.

Can you still remember the first song you wrote?
I remember the first song and it was called ‘Out of Time’ and it was like a really heady, philosophical song. This really goes to show how serious of a child I was. It was like about the anxieties and pressure of running out of time, which is hilarious because I still have that same anxiety. I’ve had it my whole life. I think that I would still relate to that song if I heard it today. It was actually a pretty cool song because it was a bizarre open tuning. That one was a cool one because I made it up myself and I didn’t really know what I was doing. I still don’t really know what I’m doing.

Who first inspired you to start making music? Who were your favorite artists growing up?
I think it was a lot of things. I don’t think it was any one thing. My parents have a bunch of really cool, weirdo friends and my fake Uncle Randy—my “funcle” Randy—he would always come to the house with different instruments. That was actually the first instrument I ever got was this child-sized acoustic that he brought and he was the first person I ever jammed with, which was cool because we were jamming to Dave Brubeck Quartet’s “Take Five,” which is still probably my favorite song ever.

When did you start working on your songs for Lonerbecause I heard it took a while for it to get released?
Yeah, it did. It was a painful process to get the album out. Writing the songs was the easiest part. I had the songs cooking for a while. Then when I was making the record new songs just kept coming and I ended up swapping some out for new ones. I think because it took as long as it did, I ended up like scrapping some songs that I didn’t think really fit with the style of music that I was getting myself into. I think the time it took ended up being a blessing because it gave me time to really cultivate what I was really trying to do. It gave me time to really develop a narrative and an aesthetic. I had this idea incubating that over time I was like, ‘Oh, I know exactly what I need to do and how to do it. This is what I want it to look like and this is how I want it to be approached. This is what I want the stage to look like.’ I had all the details down by the time we were in the final stage.

Maybe it helped with your fear of not having enough time?
Well, it’s funny that you mention that because I think it really did. By the time my album was all finished I was like, ‘Ok, I created my masterpiece.’ I handed it in and [my former label] was like, ‘Yeah, we’re going to test some songs on the market’ and they weren’t excited about it at all and I’m like, ‘Ok, there’s an issue here.’ So we ended up parting ways, but I was really afraid they were going to keep my album. So I was like trapped in purgatory for months. I didn’t even know if I was going to have a career. When it was finally resolved and I switched labels, it was such a relief because I wasn’t worried about how it was going to be received. I was just so grateful for it to be out and to be able to play music. I had just been waiting for so long to even go on tour again because I hadn’t had a new album. That was one of the reasons why last year was so amazing and fun. I had been down for so long that it was finally like my moment where I could just breathe and have fun and not care about anything. It was really just a giant cherry on top that the album ended up doing really well and it has allowed me to get to a place where I’m almost done with the next one. There’s just something to be said about not worrying so much, letting the cards fall where they may, and just seeing where it takes you. There’s something really liberating about that, so I think in a way I do feel like I’m not worried about time anymore.

How did you find the members of your band that you’re touring with?
I’ve gone through of a few different configurations of my band. I’ve had like insanely good players in my band before and there’s always something a little unsettling about it. They would be the best players ever, but they wouldn’t be loose onstage or we wouldn’t get along off the stage. So when I was getting the band together for this album, I was like ‘fuck all this, I’m going to hire my best friends.’ At the time I was not really living anywhere, I was just hopping around from New York AirBnBs and sublets to going up to Vermont where my friends were. A few of my friends are really great musicians and are just so fun. They’re from Vermont and my best friend Abbie [Morin] lives in Vermont and they were like helping me try and find a drummer and a bass player and stuff and they were like, ‘why don’t we just hire our buds? This guy Josh [Speers] is an amazing bass player and he would be really fun.’ That’s kind of how it happened. It was just like my friends who happen to be really great musicians, but most importantly, we really get along and I’ve noticed that the live show is so much better because we really enjoy each other.

The undertones of humor and seriousness on Loner contrast each other so well. What made you want to use humorous elements in these songs?
I think that humor can be used as a really good tool to get people to listen to things that they normally wouldn’t care about or it takes the edge off of really serious things in a way that you’re like, ‘huh, I can relate to that,’ or ‘that’s happened to me,’ but you’re also laughing at the same time. I think that’s a really unique thing. A lot of comedians use it all the time, especially the satire of late night TV where you’re talking about all these people getting killed and it’s horrific. All these horrible things, like our president is a buffoon. This is a really difficult time to get through. A lot of people are really struggling and one way that some of this can be bearable is by laughing at how horrible it is because like what else are you supposed to do? I think by laughing at something, you take a lot of the power out of it, so when you’re approaching really serious issues in your life, by laughing at things or poking fun at the things that annoy you about yourself even, it’s making those things a little bit more bearable. To me it’s just more interesting. I started my whole career on writing sad songs and at a certain point I was like, ‘I feel like I can make this more interesting. I feel like I can approach the same subject matter or same hard-hitting issues in my life and do it in my music more like how I approach these things in my personal life.’ Ultimately, I wanted to make an album that showcased more of my personality, and humor is a big part of my personality, and I think that’s something that is difficult to do in music.