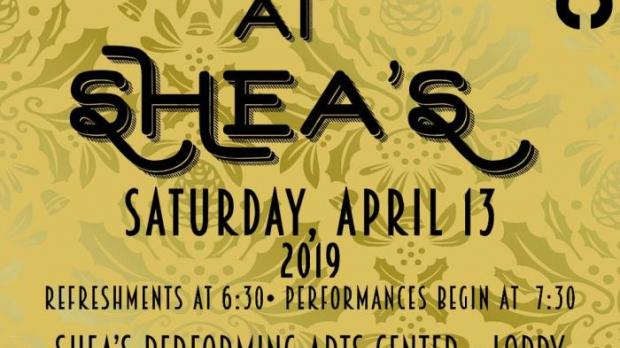 Gays at Shea's with BGMC and Laura Noack

by The Public Staff

[CHORAL] This is the annual semi-fancy fundraiser for the Buffalo Gay Men’s Chorus, and it gets held throughout the gorgeous lobby at Shea’s Performing Arts Center on the evening of Saturday, April 13. Not a formal concert, per se, the evening will feature shorter performances from the Chorus (who will be teasing their Singing with Pride program, coming later in the Spring) and a silent auction on some great locally made visual art. A cash bar will be open throughout to complement some delicious finger foods. Additionally, BGMC just announced guest vocalist Laura Noack will perform at the event. Noack is a skilled soprano with a master’s degree in Voice Performance from ASU and a bachelors in Music Education from SUNY Fredonia. She has appeared in festival lineups at the Vancouver International Song Institute as well as the Halifax Summer Opera Workshop and has performed abroad in professional chamber choirs. In 2014, she attended the revered Franz-Schubert-Institut in Baden bei Wien, Austria, which afforded her the opportunity to perform in masterclasses for opera and chamber royalty like Christina Ludwig, Elly Ameling, Helmut Deutsch and Rudolf Jansen, among others. Locally, she’s a staff singer at Westminster Presbyterian Church and a teacher of vocal music, K-8, at the Iroquois Central School District. This isn’t a black tie event, but the Chorus loves it when people get dressed up to hang out with them at Shea’s. Cocktails start at 6:30 p.m. with singing to follow an hour later. Tickets are $35 for singles and $60 for pairs and can be ordered by clicking though to the events page at the BGMC website, www.buffalogaymenschorus.com/events.