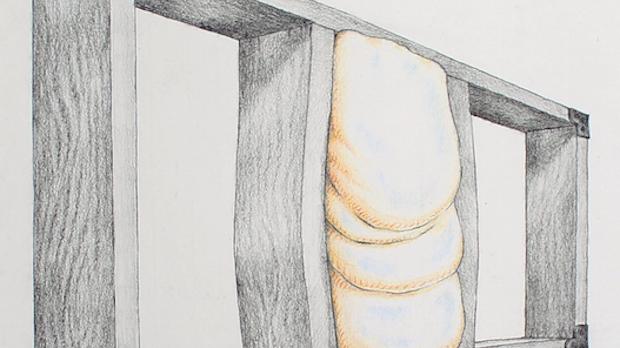 A Colleen Toledano sculpture, as drawn by Kyle Butler.

[ART OPENING] The seventh and final installment of Hallwalls’ innovative series of shows highlighting the bounty of Western New York talents in the visual arts takes place on Friday. Each show has been a testament to its curatorial team of Hallwalls’ own John Massier being joined by Rebecca Wing and Kyle Butler steadfast work in keeping an open mind and dilligently scouring studio spaces in the eight counties and beyond for work that could stand its own and tell a story of some kind. The shows have included established artists and neophytes alike, across all media and traditions. Too many cooks can offer spoil a broth, but these three have proved their union as greater than their individual talents and eyes. For show No. 7, you’ll find drawings by Barbara Buckman and Lily Booth, sculptures by Gary Sczerbaniewicz and Colleen Toledano, knited sculptures by Kurt Treeby, paintings by Annie Dunsky and Mary Begley, digital drawings by Laura Brothers, a wall drawing by Fotini Galanes, sculpturally encased videos by Phil Hastings, and drawing and sculpted work by Colleen Buzzard.