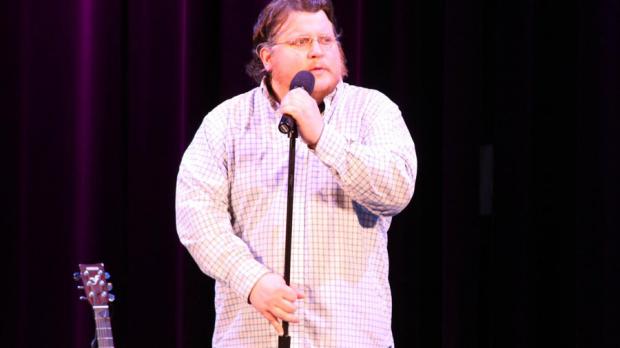 Mark Walton is taking himself out of the “Who is Buffalo’s best stand up comic?” conversation, leaving the growing pond of stand up stages in Buffalo to dive into the cavernous waters of New York City’s storied comedy scene. If anybody has a shot in the big city, it’s Walton. His brew of self deprecation, confident wit and deliberate pacing are disarming in a familiar, old friend type of way that quickly puts an audience on his side. All of these traits are very “Buffalo,” and they should continue to serve him well on new stages in New York City and elsewhere. Walton will perform a final run of shows January 15, 16 and 17 at Helium Comedy Club, which will also feature veteran New York City comic Jesse Joyce.

People are saying that Buffalo is back, so why are you leaving now that we are back?

Buffalo has made strides in the last few years in comedy. When I started there was only one open mic, now we have four to five throughout the week. It truly has flourished, and as myself and other Buffalo comics have started to travel more, Buffalo comedy is getting a reputation for pumping out strong talent.

Do you think that the Buffalo comedy circuit has prepared you to work in the “Big Apple”?

Comedy circuits are like colleges. If you are working hard, and paying attention, you can get a great education in a small state school, or a community college. Ivy League schools put more pressure on you to do the work, have more competitive students, and better faculty, but really, if you want to get an education, you can find the right people that can help you no matter where you are.Buffalo is like that. It is (and) was a smaller scene, but there are people here who know the industry and can give great advice.

Do you have any key memories or pivotal moments from your career in Buffalo that stick with you?

Some of the best opportunities I have had are the roast of Rob Ray, which was amazing, and opening for Doug Stanhope, Jim Norton, and Marc Maron. All opportunities that I owe to Kristen Becker. I was able to open for Dave Attell at Helium as well, which was a dream come true; as well as do a handful of feature weekends, which have helped me grow. I probably learned the most from Matt Bergman. I remember seeing him tell a story, that was two to three minutes long at an open mic, and the story only had one, maybe two laugh points. But while the story was going on, the audience was captivated, and listening, and then when the payoff came, the laugh was huge. In comedy you learn you should have a laugh every 15 to 30 seconds, but from that I learned that keeping the audience interested allows you to do a longer set, and keep the audience on your side even if one or two jokes don’t work.

Can you share any insight or advice for people who might be thinking of getting into stand up comedy themselves?

The best analogy I ever heard for how to do stand up was from Penn Jillette. He said it is like being a pilot, experience isn’t measured in years, but instead by flight hours. Comedy is like that, you need your stage hours. Its very similar to diet and exercise, its the only real effective way to lose weight, and it’s not complicated, but it’s not easy. The only way to get better at stand up is to do it, and to edit your jokes as needed, and write as much as possible. Now is a great time to get into comedy, because stage time is available Monday through Thursday, twice on Tuesdays, at Nietzsche’s and Helium. Wednesdays are at Milkie’s, Thursday night at Mr. Goodbar on the second floor, and there is a new open mic starting at Tudor Lounge on Mondays. The scene is growing here and it is a great time to start. It’s not for everybody, but anyone interested should at least check it out. Worst case scenario, you get to see what people put into something you like.

Pittsburgh writer and comic, Jesse Joyce, describes volunteering at a haunted house as spending October “getting punched in the dick by a bunch of scared eight-year-olds.” The self-appointed Father of Swiss Comedy, as he’s the only comedian he’s ever heard of performing in Switzerland, has entertained audiences all around the globe, and contributed to several television ventures including Last Comic Standing, Comedy Central’s The Roast, and AMC’s “Date Night,” to name a few. His rapid-fire delivery lends a sense of urgency to his material, raising the stakes on jokes about the absence of a thirteenth floor in hospitals, and why it’s not a good idea to hit on an attractive nurse or nursing assistant whiles she’s changing your catheter. — Kellie Powell