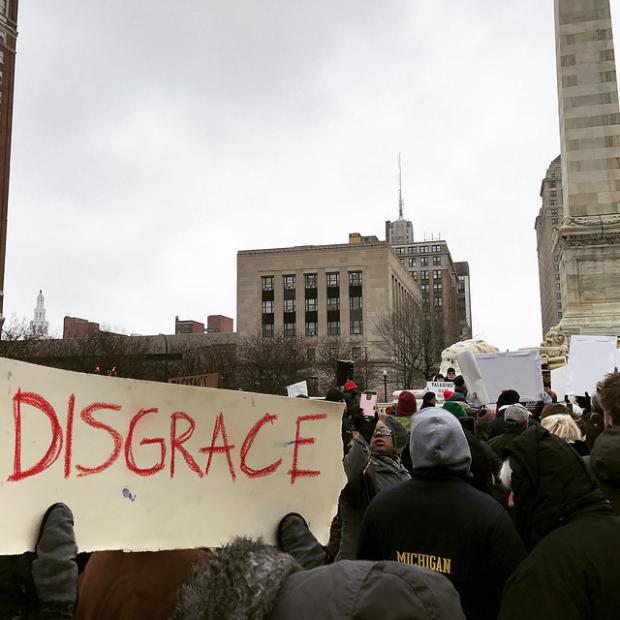 The Buffalo Board of Education held a special meeting Thursday afternoon to take up a resolution seeking Carl Paladino’s resignation from the board, and his removal by the state Education Department should he refuse. The resolution, which was introduced by its author, new board member Hope Jay, passed 6 — 2; Paladino was not present.

The meeting was held in a packed Common Council chamber, and got raucous at times. Both Paladino allies remaining on the board — Patti Pierce and Larry Quinn — condemned Paladino’s statements, but preferred instead to offer him an opportunity to apologize to the board, to students, and to the city. On its face, this would not seem unreasonable.

Board President Barbara Seals Nevergold kept the meeting orderly, asking spectators to not heckle Pierce or Quinn. Anti-Paladino board members, especially the African-American females who have borne the brunt of Paladino’s arrogant belligerence on the board, spoke passionately about how Paladino’s hatred reflects poorly on the schools, the city, and students; a student who used words such as Carl’s would be disciplined for violating the various anti-bullying rules and codes of conduct.

Pierce’s presentation was reasonable, but went went far off the rails when she called on Buffalo to show the same sort of compassion and forgiveness as Charleston, SC in the wake of the church massacre by a white supremacist in June 2015. While Pierce likely didn’t mean to compare Carl Paladino to mass murdering neo-nazi Dylann Roof, many in the crowd howled with derision at what they termed Pierce’s use of this tragedy to protect her “racist friend.”

Quinn told a heartwarming story about his childhood African-American nanny crying at night wishing she could be white. The crowd laughed, and Quinn didn’t know what was so funny, oblivious to the fact that it’s not common for families to retain the services of strangers to raise their kids. It nicely punctuated the sense of privilege emanating from Carl’s weak support during a debate over racism.

I could have done without Theresa Harris-Tigg referring to Paladino as “orange Cheeto” in an obvious dig at the President-Elect. She prefaced that with a statement about how Paladino “craves infamy,” and she will “not say his name again” or “continue to empower him”. It seems disingenuous to me, however, for someone to complain about dehumanizing language by using dehumanizing and insulting language. I have no doubt, however, that Harris-Tigg especially has been in Paladino’s relentlessly bullying crosshairs for months, and this was her chance to give him a taste of his own medicine. Either way, it was unnecessary; when they go low, we go high.

Every other board member also spoke convincingly about Paladino’s pattern of hostile and disruptive behavior. It was clear that this was more a victim impact statement than a board debate.

There was no show of support for Carl Paladino at the meeting. At the chilly rally earlier in the day, about three showed up. One lady had a bizarre sign with fetuses on it and kept yelling about abortion. Two older men showed up, and one had a sign in support of Carl that he tried to display directly under the podium. There was about a minute where protesters and Carl’s lonely supporter danced around each other, avoiding contact, to cover up the pro-Carl sign.

But there were 2 — 300 people, some who brought their children during this vacation week, who expressed their outrage at this man who governs their school district and thinks that Michelle Obama is a male gorilla.

Significantly, the story about Paladino’s comments has now gone international and every non-Buffalo media outlet refers to Carl as a Trump surrogate or state co-chair. While Trump will probably continue to take Carl’s calls, chances are that people like Jared Kushner, Steve Bannon, and Reince Priebus have no use for Paladino or his list of prospective White House hires. This “joke” of his has blown up in Paladino’s face in a way he likely never could have foreseen.

As for Paladino, Jim Heaney at the IP notes that Paladino’s speech is protected by the 1st Amendment and demanding that the state remove him from the board sets a dangerous precedent.  It’s a valid point, and one that I’ve thought about, as well. If the state sanctions Paladino for his racist words, the 1st Amendment is definitely triggered. Carl Paladino absolutely has a 1st Amendment right to call Michelle Obama a male Zimbabwean gorilla; however, Paladino doesn’t have a concomitant Constitutional right to be on the school board. If he violates the rules of conduct as they relate to the board, he can be removed.

The state can remove a board member if his conduct hinders the board’s ability to function, and the Buffalo school board is making that very allegation. Paladino’s relentless, oft-racial bullying does not advance the board’s work in any way. Indeed, expressing death wishes or threats against the President, which Paladino did in his “wish list”, is also not necessarily protected speech and could very well invite a Secret Service investigation. Either way, if the state chooses to remove Paladino, he has already indicated a willingness to fight that in court — Carl Paladino has cost the board thousands in legal fees already, what’s a few more?

What Paladino wrote in Artvoice is not dissimilar from the words that saw a West Virginia mayor resign and an IDA member removed. Is Buffalo at least as responsible as Clay County, West Virginia?