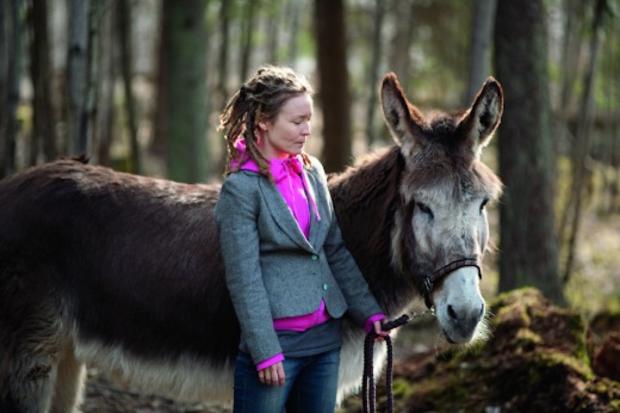 The first big thing you see in the Ecologies of Drama exhibit of film and other art of Finnish avant-gardiste Eija-Liisa Ahtila at the Albright-Knox is the enormous spruce tree. Horizontal, on six contiguous screens, each showing a different vertical segment of the tree. Each segment filmed separately, branches waving in the breeze, out of sync from screen to screen. Because how else do you capture and present such a supra-human-scale natural subject? Particularly with camera and film—human technology—extensions of the human eye and human perception. Such subjects as may exist in a different—that is, non-human—spatial and temporal realm. Alien to our way of perceiving.

The number of stories in the literary universe may be finite—anthropologists group them into variants of a limited number of archetype stories—but the number of ways of telling stories seems to be infinite. Ahtila’s art is about the infinite ways of telling stories. (Informed by the conundrum proposition that although we—storytellers and audience—are humans, and so color all telling and hearing and seeing with an anthropocentrism, anthropocentrism isn’t the be all and end all. Other realms of being—animals, plants—communicate and perceive in ways beyond our human ken. One of the films, Studies on the Ecology of Drama 1, explores this proposition. And precisely what are the implications of the proposition for storytelling? My head hurts.)

The stories Ahtila tells range from relatively simple and short vignette piece coping strategies—not always particularly propitious—of women undergoing psychosis experiences, to longer accounts of traditional stories such as the Gospel Annunciation story, when the Angel Gabriel announced to the Virgin Mary that she was to become the mother of Jesus, or a reenactment of a true story relative to the saga of colonialism over the past century and half or so and crisis immediate current events in the Middle East, a variant on the Cain and Abel story.

The Annunciation is a film about making a film that explores the idea of the miraculous. But in a naturalistic way. Yet in no way seeming to dismiss—naturalistically, as it were—the possibility of the miraculous. Rather, Ahtila asks, “How does one know what things are, unless they’re already familiar?” And answers, “One approaches such things through the familiar.” For her real interest is in the unfamiliar, the strange, the unknown, rather than the known. (This ties in with her objective to get beyond anthropocentrism. She regularly refers to the work of biologist and sensory perception theoretician Jakob von Uexküll, who wrote about the “fallacy” of “belief in the existence of a single world, into which all living creatures are pigeonholed.” The fallacy, he writes, that “gives rise to the widespread conviction that there is only one space and one time for all living things.”)

The Cain and Abel variant is based on an event that occurred in Algeria in the 1950s, amid the colonial Algerian struggle for independence from its French overlord. The Cain figure is a duo in this case, two Algerian boys—kids—who murder their French friend and playmate in a bizarre remote revenge act for various French atrocities against Algerians. “We weren’t mad at him. He was a good friend of ours,” one of the Algerian boys says under questioning after the murder. “We decided to kill him because the Europeans want to kill all the Arabs.” And because he and the co-murderer—his brother—are kids, he explains, they couldn’t kill a grownup, but could kill someone their own age and size. This film is called Where Is Where?

Often for these movies there are several screens, in several directions from the viewer—in front, to the sides, maybe behind—showing simultaneous related but variant views of the same subject matter. For example, landscapes in different directions from a central viewing point. You can turn around to look at any one, or maybe several at the same time. But like in real life, in the real world, you can’t see everything at the same time. You miss something. But multiple screens is the tip of the iceberg. There’s lots going on in these films, more than any one viewer could take in in any one viewing. Much it would seem directly or tangentially related to von Uexküll’s theorizing about unsuspected ways of sensory perception, related to space and time alternatives.

Analogous to how there’s a lot going on in just about any good story. More than any one person can take in, at any one time anyway. Why stories are a gift that keeps on giving. That keep being newly interpretable.