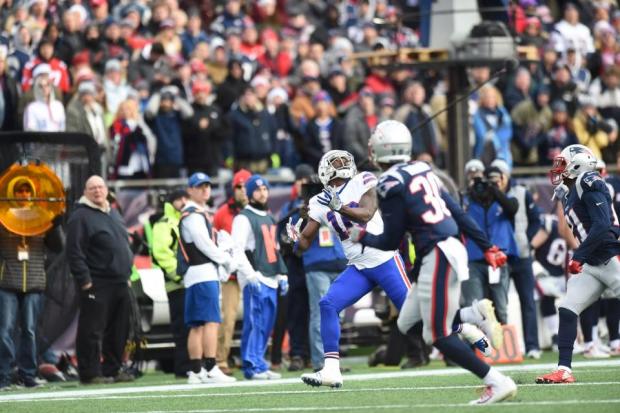 For a while there last Sunday, it seemed like the Buffalo Bills were playing the same sport as the New England Patriots.

That has not happened very often over the past 17 seasons, at least when Tom Brady is playing and the Patriots give a shit about the outcome. Both those things were true Sunday, yet there were the Bills, trading shots with their tormentors well into the second half of a tie game. That Buffalo might go into the season’s final week with a chance to get themselves into the postseason without catastrophe befalling a handful of other teams.

Just as the thought was beginning to form that maybe this Buffalo team was different, that it could possibly produce enough big plays and even get a break somewhere (one was certainly due after the Kelvin Benjamin Reversal late in the second quarter) to get it done for the first time this century, it happened.

Because it always does. At least when the Bills and Patriots are involved.

Kyle Williams had just sacked Brady, blunting what looked like an inevitable touchdown drive and forcing New England to settle for a field goal that produced the fifth tie in what had been an entertaining, even playoff-level game.

On the first play of Buffalo’s next possession, which began with a chance to take the lead for the third time, Tyrod Taylor faded back.

And faded back some more.

Mercifully, New England’s Malcolm Brown caught up to Taylor and brought him down before he was able to drift and twist into his own end zone.

Facing second-and-25, Bills head coach Sean McDermott and offensive coordinator Rick Dennison could have come up with a two-play attempt to cover the necessary yardage. After all, the Bills were having one of their most efficient offensive games of the season, not having gone three-and-out all day. Maybe even had one built into the game plan, since Taylor getting sacked isn’t exactly an unforeseeable event.

Instead, they gave up.

Not on the game, but on the idea of accomplishing anything more than not turning the ball over in their end. Which, against Brady in the later portion of a close game, is the same fucking thing.

A Mike Tolbert run, designed to gain no more than a couple yards, netted zero. A dump-off to LeSean McCoy picked up 10. And, as Dennison drew it up, Colton Schmidt came jogging out to do his thing.

Now, Schmidt is a fine punter. One of Buffalo’s top weapons, even (which says quite a bit about the Buffalo offense). But even Schmidt’s 55-yard launch gave Brady the ball at his own 35. Took him all of four plays to cover the needed 65 yards to score the touchdown that effectively ended the game.

Sure, Taylor guided Buffalo in range for Steven Hauschka to miss only his fourth field goal of the season early in the fourth quarter. And even that left the Bills just seven points behind with 13 minutes still remaining.

From there, though, it was a curb-stomping.

So here we are, right where every Bills season other than the really putrid ones has ended up since 1999—contemplating which implausible scenario is the least unlikely.

Here’s how the We Want Marangi Analytics Department sees four configurations of wins, losses and even a tie, three of which get Buffalo to the postseason:

LIKELIHOOD: Not terrible. The Dolphins look to have packed it in since upsetting the Patriots three weeks ago. Cincinnati knocked Detroit from playoff contention last Sunday, and would love to do the same to the former Cleveland Browns, particularly in what may be the last game for Marvin Lewis. And every big Ravens game seems to be decided by a late field goal, one way or another.

LIKELIHOOD: Not good. Doug Marrone insists the Jaguars will play to win, despite having clinched the AFC South and a first-round home game, so a win over Tennessee, which has lost three straight, is a decent possibility. A win by the Raiders, who have also lost three in a row, and looked horrid doing so, is a much heavier lift. Wonder if McDermott regrets the Nathan Peterman Massacre in Los Angeles against the Chargers, even a little.

• Buffalo ties, while the Chargers and Titans lose.

LIKELIHOOD: Sorry for even bringing this one up. Despite the best efforts of both McDermott in the Whiteout Bowl against Indianapolis three weeks ago and Rex Ryan against Miami on his final game in Buffalo, the Bills have not played to a tie since 1972, two seasons before the NFL introduced overtime for regular-season games.

● The most-probable outcome, based on history, is Buffalo finds a way to fall to the Dolphins in South Florida, while everything that had to happen to end the playoff drought happens—Baltimore, Los Angeles, and Tennessee all lose at home.

LIKELIHOOD: If I knew someone selling four-team parlay cards, I’d bet this one. If it weren’t illegal, of course. Because that would be wrong.

If nothing else, the Bills have already reached what amounts to the elimination round. Since the NFL moved all the games involved to 4:25pm on New Year’s Eve, none of the contenders—to use the word loosely—can be mathematically eliminated before taking the field.