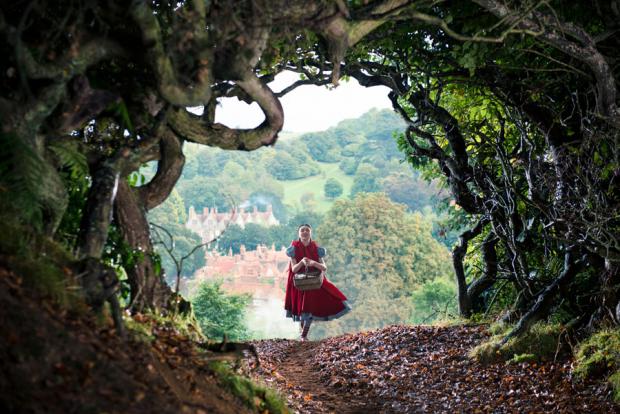 You have to sit through a fair amount of the ends credits of Rob Marshall’s Into the Woods before you see Stephen Sondheim’s name, listed as a music “consultant.” Whether or not he did much in this capacity, this is unmistakably a Sondheim show. A possibly small but enthusiastic part of the audience at a recent preview seemed in no doubt about this: They clapped a couple of times after big numbers, as if they were at a live performance. And they cheered when it was over.

Sondheim has long had his fiercely loyal partisans even if he’s really never been a mass-market brand. Even on the Great White Way Sondheim’s shows don’t always do boffo box office; sometimes they’ve tanked. The frequent rap against him is that his work is too often freighted with coldly intellectual, audience-alienating concepts. They’re often sharply clever, it’s been said, but cynical and lacking a counterbalancing spirit that could involve people. It’s also charged that his sometime librettist James Lapine lets things slide in their second acts.

Into the Woods isn’t without its conceptual apparatus, but it also has periodic infusions of wise-guy show-business sass that Marshall (Chicago) pushes. There’s a comic feeling that repeatedly surfaces, sometimes a little unsettingly as it seems to undermine the show’s darker mood.

Sondheim and Lapine have come up with an intertwining parodic assembly of traditional fairy tales and their ancient themes, sending their characters off into those woods on a selection of quests. The most nearly central one involves a childless baker and his wife (James Corden and Emily Blunt), who are told by the witch next door (Meryl Streep) that she’ll lift her barren curse if they’ll go gather five items—including a white cow—her need for which is very personal.

On their way, they encounter Jack (Daniel Huttlestone, whose performing can remind one of Oliver!’s Jack Wild), who agrees to trade his cow for a few “magic” beans they just happen to have. Also wending her way through the forest is Cinderella (Anna Kendrick), yearning to attend that prince’s ball. A brassy, bratty Red Riding Hood (Lilla Crawford) encounters her wolf (Johnny Depp in a thankfully short, lubriciously pederastic and creep-you-out-turn). And so forth.

Much of this is fun and Sondheim’s songs are almost always delivered with verve and emotive skill. Marshall keeps the turning, incurving plot moving gracefully. Those story-commenting songs are frequently written and performed in a semi-operatic, through-sung fashion and the rhyming, rapid-fire lyrics work a kind of magic of their own.

Sondheim and Lapine (who adapted his own libretto) were using all this to wryly comment on human illusion and the moral tenor of children’s versions of the Grimm brothers’ tales. But there is that second act letdown again, and some of that act’s resolving business is rather too close to banality. (When Emily Blunt sings “You’re Never Alone” it’s uncomfortably like “You’ll Never Walk Alone” from Carousel, and self-parody.) On the other hand, Meryl Streep gives one of the finest performances ever in a musical film, masterfully running the gamut from cracking wise through to poignant surprise and sadness and on to singing with bravura drama. Whew!

This Into the Woods is most likely to play best for the choir of the already converted.

Watch the trailer for Into the Woods: