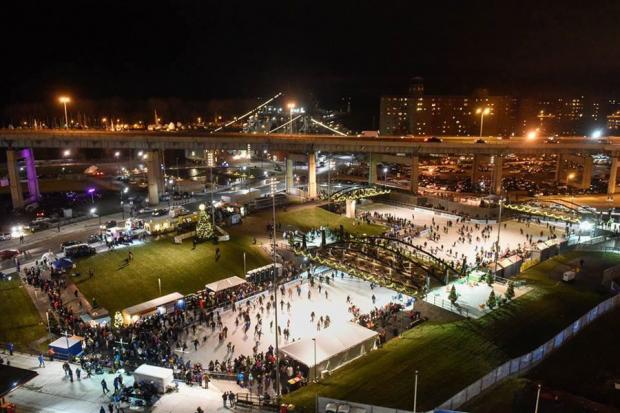 ‘Tis the season for naughty and nice alike to wish for gifts from that jolliest of idealized parent-figures, old red-suit himself. But it’s also the season to sympathize with Santa, whose problem is perennial: how to give the good kids the right thing when the bad kids are so adept at raiding the toy-sack.

Usually, this column asks Santa-Albany to give Buffalo broccoli, spinach, sensible shoes, a proper bedtime, and a schedule of finger exercises and calisthenics. Usually, this column asks that Santa stop giving us what we usually get: real-estate tax breaks, handouts to political contributors, and those special, expensive Albany Reiki treatments, whereby the heavy hand of state government comes this close to forcing governments and school districts to merge, but never actually touches the status quo, leaving dozens of extra town supervisors, school-district administrators, and little-box boundaries undisturbed, and with them our aching social sclerosis, all inflamed, all over.

Nope, this isn’t a call for more cod liver oil or black socks. This year, we need to ask for  the real treat—the gift that will keep on giving, the cheapest, easiest, most plentiful deliverable New York State has to give.

Santa, for Christmas, for Hanukkah, for Kwanza, for the New Year, please give Western New York more downstate college-age kids—especially the honors students who will stick around and work with the solar engineers, the bioscientists, and the rest of the thought-leaders that New York State’s money started bringing to town on Santa Andrew’s last trips down Buffalo’s chimney.

Think of it: A UB or Buffalo State kid on full scholarship with room and board costs about $15,000 a year. Bringing 2,000 honors students from the Five Boroughs to Buffalo for 10 years would cost less than one-third of the Buffalo Billion, and create 20,000 Buffalo-trained brains to drive the new economy here. Thirty million a year!

The PR machine is working for Buffalo just now. Media all over are forwarding our new stories. We have the photogenic new toys—the downtown ice rinks, Buffalo River paddle-boarding—adding heft to the vibrant self-defining music scene, the many real-estate websites telling stories about our vigorous self-started movement of rehabbers, some business press about Buffalo’s aborning entrepreneurial culture after the 43 North awards, and now some national press on the Alexander Levy exhibition at the Burchfield. Buffalo’s buffalo are no longer just buffaloing Buffalo’s buffalo: Outsiders are getting the word. It’s all well and good that Canadians are still bargain-hunting here thanks to recent stories in the Toronto media, but their dollar is falling apart again, the malls here have some competition in St. Catharines (right next to the brand-pnew, non-subsidized Bass Pro store), and besides, the Canadians are not going to be moving here. New York City kids, however, could—and there are great reasons to get serious about leveraging the PR bonanza to get them here. Quick.

The first reason: Our Buffalo-area colleges are a major economic force here, but demographic trends in Upstate are never going to sustain the flow our institutions need. At Buffalo State College, SUNY Buffalo, Geneseo, Fredonia, Empire State College, and even the community colleges, we will have room for growing number of 212ers as the flow of 716ers, 585ers, and 315ers shrinks.

The second reason: Immigrant kids in the New York City metro, especially in Bronx, Queens, Brooklyn, and Nassau, fit Buffalo’s bill beautifully. To wit, they’re urban strivers who aren’t going to be paying private-school tuition anytime soon. State schools offer the best deal. There are at least 35,000 slots at UB and Buffalo State for undergrads, and another 20,000 for graduate students. Could we accommodate 2,000 more?

We certainly know where to find them: where the numbers are. The New York numbers stagger the Buffalo imagination. In Brooklyn alone, there are almost 200,000 people between the ages of 18 and 24 enrolled in college—but that’s only around 40 percent of the folks that age. There are potentially 50,000 more 18-24-year-olds in Brooklyn alone who might want to go to college, if Erie County’s numbers are any guide. It happens that just over 52 percent of Erie County 18-24-year-olds are in college. Ditto Queens, the immigration capitol of the Empire State. From Astoria to Hollis, from the Triborough Bridge to the Nassau County line, over 1.2 million of the 2.5 million people in Queens speak a language other than English at home—and only around 42 percent of all those striving, multicultural 18-24-year-old Queens kids are in college. Bilingual, worldly, entrepreneurial (the largest number of start-ups in New York State is happening where the immigrants are), there are tens of thousands fewer young Queens adults in college than there might be if they were to seek higher education at the same rate as our shrinking supply of Erie County youth.

Might there be room for Queens, Brooklyn, and other Gotham kids here in Buffalo?

The ice-bike, ice-skates, and saloon strategy

One wonders whether the market-research folks found, in their due diligence, that Buffalo’s brand opportunity was going to come from the combination of beer and skateable surfaces. If nobody thought that through, no matter: It’s what we’ve got, so it’s time to create brand-awareness in the place where the kids are in big numbers.

Young folks eligible for in-state SUNY tuition need to be shown pictures of the ice rinks, the curling ice, the iced beer, and the West Side apartments where a junior, a grad student, or a postgrad can split rent and utilities for less than $500 a month. New Yorkers simply do not know about any of this. Also under-reported in Gotham: the presence of Buffalo professors with terminal degrees who actually have contact with students. At Buffalo State, the class sizes are more like those at private schools that charge five to seven times the SUNY rate in tuition alone.

But how will that demographic of college-age, uplift-hungry kids get this story? One gets the impression that college administrations are kept apart from the economic development conversations, except to the extent that the SUNY campuses were apprised of the addresses of the tax-holiday zones that Albany created adjacent to them. This is the newest version of the old Jack Kemp theory, a profoundly bad theory, that capital will magically accumulate if only local and state governments will exempt local businesses from having to help pay for roads, public safety, schools, or anything at all that everybody else has to pay for. The program has been in place a couple of years. Nobody should expect much capital formation to occur, any more than it occurred in Enterprise Zones, Empire Zones, or any of the other tax-holiday tracts.

Of course, other places have figured this out, too. Buffalo is like Cleveland, Detroit, Youngstown, and other places that get cold in the winter. Bad race relations, bad regional planning, deindustrialization, brownfields, and all that bad stuff are in our collective past all over the Great Lakes. Unlike Pittsburgh, with its downtown universities (plural), its downtown stadiums (plural), its downtown multi-billion-dollar foundations (plural), and its independently funded historic-preservation/adaptive re-use operation, Buffalo-Detroit-Cleveland-Youngstown are all trying to do precisely the same thing at the same time, but without Pittsburgh’s multiple assets all agglomerated side by each.

But we can steal a march on Detroit, because we have SUNY, and a results-hungry state capitol, whereas Michigan has only dog-whistle race politics, union-bashing, and a stingy state exchequer. Cleveland, which wisely copied our Garden Walk and wisely stuck with a large-scale urban agricultural movement, is massively richer than Buffalo, and has wonderful islands—the Cleveland Clinic island, the Case Western Reserve island—but it hollows and hollows, sprawls and sprawls, and its water will soon taste like poor poisoned Toledo’s.

We, no matter that old Randy Newman song, are the true City of Light. Buffalo’s the buzz. Buffalo’s the inexpensive, photogenic place with the new toys. It’s time, Old Elf, to bring some kids here to play with them.