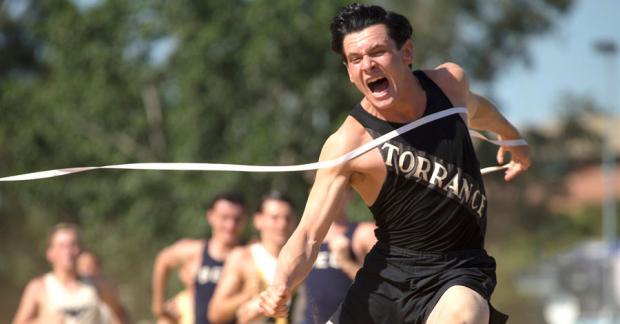 Angelina Jolie’s Unbroken opens by taking us inside an American warplane on a bombing run over the Pacific during the Second World War. In this and a closely spaced subsequent scene, we viscerally experience the close quarters, the frightening, deadly proximity of Japanese fighters, the injury and death in these cramped spaces. These two air war scenes are among the finest ever made for a motion picture. Their coldly terrifying realism are far from the choreographed, more aesthetic sequences found in a long history of movies dating back to the silent Wings.

But the fear and pain are only beginning in Unbroken. They’ll lengthen and heighten, to an extent that may be unparalleled in a mainline movie intended for a popular reception.

Unbroken is the story of Louis Zamperini’s war, and it’s a grim, fear-ridden, seemingly hopeless one. Zamperini (Jack O’Connell), an Olean native (he left at the age of two), lived through an almost unbelievable series of hellish experiences as a Japanese prisoner of war. Many American and British servicemen and others suffered at the hands of the Japanese during similar imprisonment, but Zamperini endured a specially horrible one as the literal whipping boy of a perhaps psychopathically evil Corporal Watanabe (Japanese pop star Miyari). For the better part of two years he was vilely and violently abused by this man, who, it has been suggested, sought, and derived an erotic release from his attacks. And he focused on Zamperini, for reasons apparently known to no one.

At times, it seems as if the filmmakers have studied Nagisi Oshima’s Merry Christmas Mr. Lawrence (1982) and its story of a cruel homoerotic obsessions of a Japanese camp commandant for an English prisoner (David Bowie).

But this horrible story is true, adapted from Laura Hillenbrand’s 2010 book. It’s going to be very uncomfortable for many, I think, particularly at 137 minutes. And it lacks a really satisfying dramatic arc: Zamperini’s excruciating ordeal just ends with the war, long before the book did.

It’s difficult to know what kind of recommendation to make about this movie. It’s certainly a deserved tribute to an extraordinarily courageous and strong man. Yet it seems unfinished and doesn’t provide an audience with a satisfying storyline.

Watch the trailer for Unbroken: