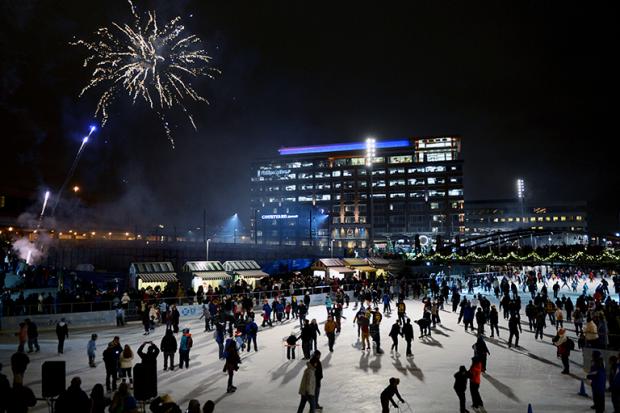 With a possessive yet inclusive slogan–”Our Winter. Our Waterfront.”–downtown Buffalo’s shiniest, newest attraction, The Ice at Canalside, opened with festive pomp on December 18. Timed for winter holidays and sport, the grand opening program was a mix of two-minute speeches by electeds from atop one of the span bridges over the icy representative canals, booming live (Neon Trees) and recorded music, and sporty demos.

A thousand or so revelers and skaters-to-be also gazed upward at the bridge for a historical survey of canal facts read by Mike Vogel, editor/professor/historian. The rough-and-tumble district of yore, and former site of the beloved Aud (Buffalo Memorial Auditorium) is now this impressive and accessible year-round venue.

Three of the native politicians who spoke also laced up (a few even held their own hockey sticks): Congressman and waterfront champion Brian Higgins, County Executive Mark Poloncarz, and State Senator Tim Kennedy tried out the ice. Kennedy’s son Connor, age nine and “representing the next generation of Buffalonians,” said Mayor Byron Brown, had the honor of cutting the official Canalside ribbon that night.

Also moving about the surface, making their debut, were ice bikes, designed by Water Bikes of Buffalo and a Canalside exclusive. Rental of them is $10 for 30 minutes, skate rentals are $3, and admission to the ice is $5. For comparison, cross-state Rockefeller Center charges $27 admission plus $12 for skate rental. The Rock’s ice is one-fourth the size of The Ice at Canalside.

Present at the opening festivities was John Koelmel, president of neighboring Harborcenter–among its features a pair of ice rinks. Asked for a quote for The Public he said, “I’m excited to see this come alive and added to Canalside. We dreamt this for a long time and now it’s happening–dreams do come true.”

Brian Higgins, just before the ribbon-cutting, said, “This is a great public project that is important, giving back to the public what was denied. It transcends generations, it transcends geography. This is a day for the believers and the dreamers.”

Fireworks, an extensive display, lit up the sky and closed the program. The activity on the ice was constant and festive and the night pulsated with a sense of happy new history.