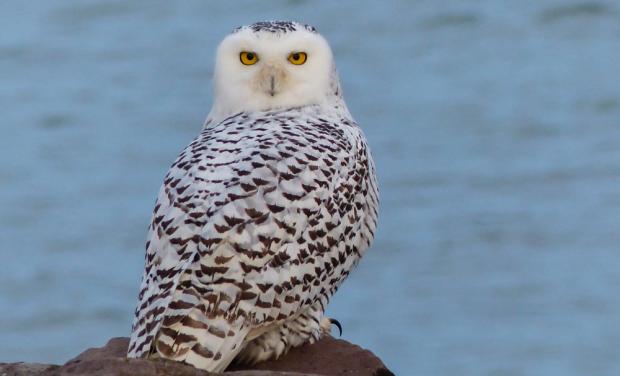 It’s happening again and no one is really sure why. Snowy owls, one of the animal kingdom’s heartiest creatures, are appearing throughout the Northeast, Great Lakes, and mid-Atlantic in large numbers for an unprecedented second consecutive winter. On a single outing a few weeks back, an area birder posted to the Buffalo-Niagara Rare Bird Alert that he observed seven owls on Buffalo’s Outer Harbor.

Patricia Leonard, Cornell Lab of Ornithology on the migration patterns: “It’s quite puzzling…we’re watching it. It might not be as big as last year, but we’re on to something.”

Last year’s irruption–defined by a seasonal expansion of both range and numbers– was considered a once-in-a-generation event, so much so that it spurred on the frenzied creation of Project SNOWstorm. As much of their behavior has long been a mystery to science, birders and naturalists banded together last winter to launch a crowd-sourcing campaign to finally get a better handle on the elusive raptors. $76,000 was raised in the span of a few weeks, and 22 birds were banded and equipped with transmitters.

It appears that lightning is striking twice and the snowy owls are back. “It’s late enough that we can tell it’s a pretty big irruption so far this year,” author and naturalist Scott Weidensaul said of Project SNOWstorm, based in northeast Pennsylvannia.

“We thought: We’re never going to see an irruption like this in our lifetime,” explained Weidensaul . “It was the most frantic and exhilarating few weeks of my life when we all pulled this together. I don’t know if I’d be able to survive another episode like that.”

Though other birders take a more logical approach. “Historically, the winter following a large invasion year of snowy owls will usually see a return of some of the birds from the year before,” explains Tom McDonald, who last winter banded a snowy in the Rochester area. “Various factors determine what percentage will return and how far they will eventually travel: weather, winds, availability of prey and competition for food resources. With last year’s irruption being one of the largest on record, we can expect to see quite a few again this winter.”

What’s fairly well-known already is that snowy owls mate and produce offspring in direct correlation to lemming populations. But lemming populations are highly variable depending on a number of factors. In the summer of 2013, the wild success of the snowy owl nests on the northern tip of Quebec’s Ungava Peninsula is thought to have triggered the numbers coming south during last winter’s banner season. This past summer, the lemming action was found on Bylot Island, some 900 miles further north, as the owl flies. A record number of snowy nest sites were found on Bylot, many likely lined with the carcasses of lemmings like the one photographed by J.F. Therrien last year.

In times of climate change, field biologists are a wary bunch. They remember the population collapse of lemmings in Norway in 1994, and in Greenland in 1998 which both lead to subsequent owl collapse. But with animals who eke out an existence in such an extreme ecosystem as the Arctic, it’s hard to come to any hard conclusions.

“We don’t know if there are any connections between irruptions and climate change, because [irruptions] go back over a hundred years,” Weidensaul cautioned. “But we know they’d be very susceptible because they range as far north as any animal. Lemmings seem to go on four year cycles, though, and we’ve seen areas where that cycle has been extended. In Siberia we’ve seen that cycle change to eight years.”

Perhaps warmer summer temperatures are having a positive impact on the vegetation that sustains the diminutive and apocryphally suicidal rodents, but it may only be a matter of time before the stoat population begins to sniff the trend out. A 1995 study from Northeast Greenland established that stoats required about eighteen months to respond to an increase in lemmings. Lemmings, on the other hand, seem able to breed almost immediately when there is food present. “Even in winter, it can be quite temperate under a deep snow pack, and the lemmings can continue to breed,” Weidensaul offered.

J.F. Therrien of the Hawk Mountain Sanctuary in Orwigsburg, PA knows more about lemming populations in the Arctic than most, but big data has not yet infiltrated the lemming ranks. The observed area on Bylot Island comprises maybe 1% of the total habitat range. “They do fluctuate in abundance from year to year on a given area,” Therrien emailed in. “Those fluctuations seem to be affected by a list of factors: weather (snow cover, air temperature, water precipitation, ice crusts), predation (avian predators like owls and hawks, but also stoat and foxes), resources (preferred plant availability) as well as internal physiological state (stress rate affecting reproductive, behavior and survival rates). Add the fact that all those conditions are changing in reaction to climate change and you have a nice puzzle!”

Data from Project SNOWstorm last winter revealed that when the Great Lakes begin to freeze, snowies tend to move out over the ice and seek sitting ducks on the pockets of open water between the shifting sheets of ice. This is a behavior that had been observed in Arctic polynyas–cracks in pack ice revealing open water–but had been unknown in their southern range. They’ve also discovered little aversion in some individuals to urban settings: in Buffalo as well as in the Baltimore harbor, snowies have successfully carved a food source from its feathered neighbors and seem relatively unconfused by the transition between open tundra and bustling city.

Currently, snowy owls are in town and appearing daily on the break walls opposite the NFTA Small Boat Harbor, Times Beach, Erie Basin Marina, LaSalle Park and points south along the lake where they prey on waterfowl by night. Alternately, snowies love open fields around airports and while Project SNOWstorm has been involved removing them from busy hubs like Logan Airport in Boston, the owls seen with regularity at Batavia Airport seem safe. Bring binoculars and scan the top of the breakwalls by water or manmade post structures near open fields for a white presence standing erect. A gull’s body will appear horizontally, but a snowy owl will appear obviously vertical, even at great distance. And it’s a thrill to witness this small piece of a circumpolar puzzle stretch this far south from one of the world’s most wild and unpopulated areas.

With thanks to Joe Fell, who brought the author to see his first Snowy Owl earlier this month.