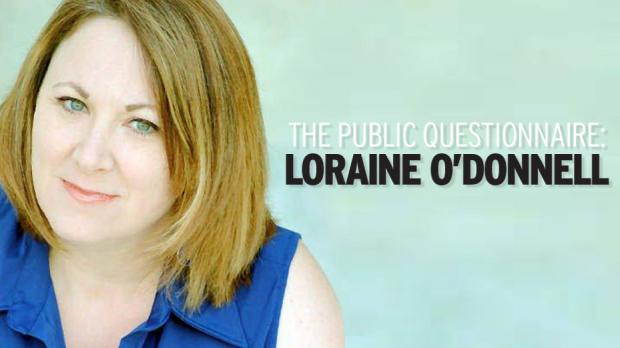 Currently appearing at Forest Lawn in It Was a Wonderful Life, a Christmas show in which actors bring some of the permanent residents of Buffalo’s most historic cemetery to life, Loraine O’Donnell has become a veritable fixture on the local theater scene over the past two decades. Never at a loss for words or for an opinion, she’s also worked as a radio personality, and as a co-host on AM & PM Buffalo, and as Luna on Off-Beat Cinema. In theater, she’s worked in musicals, comedies, dramas, and the occasional cabaret gig. With a blazing singing voice and sensational timing, whether she is sporting a nose as the witch in Into the Woods, a British accent in Tell Me On A Sunday, or a glamorous evening gown in a splashy 1940s revue, a spark of humor is the O’Donnell signature.

What quality in your current character(s) is/are most unlike your own personality?
Martha Williams’s traditionalism. She was a founder of Children’s Hospital and a charter member of the Episcopal Church Home, and a remarkable person, but I am not a “traditional” woman.

What quality in your current role(s) is/are most like your own personality?
Marian De Forest’s activism. She was a journalist, a playwright, a major force in the progressive women’s movement, and founder of Zonta International. She fought for causes she believed in.

When and where were you the happiest?
At the birth of my son…did I mention he wants to be a doctor?

What is your idea of hell on earth?
Being alone on an elevator with Sarah Palin…or any Fox news pundit.

What is your greatest fear?
Being alone on an elevator with…seriously? My son being hurt in any way…and did I mention he wants to be a doctor?

Which talent do you most wish you had?
The ability to play the piano.

What superpower do you most wish you had?
Invisibility.

What would you change about your appearance?
Nothing. I’ve spent so much of my life thinking, “If I were prettier, if I were thinner…” I’m learning to let it go.

What trait do you most dislike in others?
Dishonesty.

What quality do you most value in a good director?
Preparation. I am not a mannequin to move where you want until you figure it out. Come in prepared!

What is your guilty pleasure?
Watching Monsters Inside Me. I can’t look away!

Who is your favorite fictional hero?
The Bride in the Kill Bill movies.  Don’t mess with her…she has a sword…

Who are your real-life heroes?
Leslie Feinberg,transgender author and activist—she struggled to be true to herself while fighting for other’s rights.  All people who fight for true equality are my heroes.

On what occasion do you lie?
I usually don’t…and it gets me in trouble.

What was the subject of your last Google search?
My own name…so I could find a video piece I did for Channel 2 explaining why it’s perfectly acceptable to say “Happy Holidays” and show it to some snarky co-workers.

If you come back in another life, what person or thing would you like to be?
A figure skater.

What is your motto?
“The way we talk to our children becomes their inner voice.”