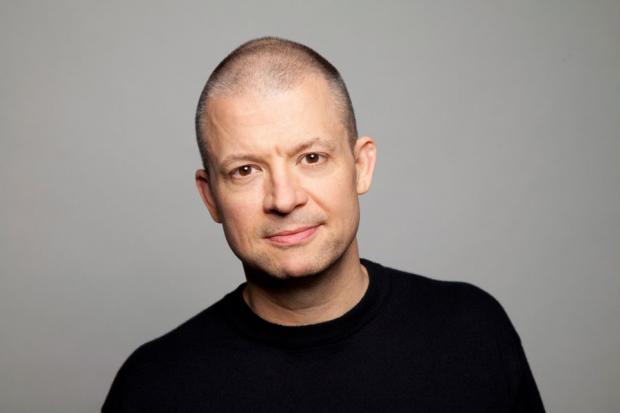 Jim Norton, comedy’s creepy uncle with the heart of gold, sits in a cab in Brooklyn on his way to shoot a guest-starring role on Deadbeat, a series on Hulu Plus. He’s contemplating why he has booked four straight days of shows in chilly Buffalo to ring in 2015. He did a similar run of gigs in Buffalo during New Year’s 2013, but sought a more tropical environment in 2014.

“Well, I did San Diego last year, and it was too comfortable. You know the crowds were nice, it was nice outside,” he says.  “And I’m like, ‘I want to be miserable for the entire week.’ so I said, ‘Buffalo is the place to be.”

Norton has instant access to a mental museum of nastiness, something that has been present in his standup comedy and explosive radio exchanges for decades. There’s more to Jim Norton, though: He can be gracious and helpful. He refers to Jorge, his cab driver, as “sir” when offering to use the GPS on his cell phone to help find their destination.

“Here’s why: Because I’m stupid. That’s why I’m going back to Buffalo on New Year’s Eve. I should have booked it for Fourth of July. But I said, ‘Fuck it, if you guys are going to suffer, I’ll suffer with you.’”

The venom, depravity, and bleakness that colors much of Norton’s stand up and on-air material as co-host of Opie Radio (formerly Opie and Anthony) wouldn’t be as effective if Norton wasn’t so damn easy to like. His mix of extreme honesty and neighborhood-Joe relatability have brought him to the top of comedy, while his commitment to good work and appreciation for his core audience have helped steer the course.

A Norton-ready audience are prepared to laugh, wince, and cringe through a dark and exotic journey. The details of which are laid out in his books, Happy Endings: The Tales of a Meaty-Breasted Zilch and I Hate Your Guts, and in his work on stage and on air. Norton has opened up about his own strange sexual activities as a child, alcoholism, a suicide attempt as a teen, and many other potentially humiliating personal matters. These topics become genuine laughing matters in Norton’s grasp, and he sees no reason not to share with his audience.

“I mean, I don’t do anything horrible, so it’s like, ‘What am I’m talking about that has never been done before or said before?’ Like what? Trannies? Who cares. I’ve paid for sex? Big deal. You know what I mean?”

That dedication to honesty was present during the first episodes of The Jim Norton Show on VICE.com. Airing online through the growing reaches of VICE over the summer gave Norton the freedom to mold the talk show format around his twisted sensibility.

However, Norton doesn’t bypass the tenants of good interviewing. Years of experience on the radio and an “open book” reputation can help put even the most dangerous subjects at ease.

While Norton’s career has taken him from beginner’s comic to regular appearances on The Tonight Show and a spot on one of radio’s most popular shows, he’s had some overlooked roles along the way. Norton was as a cast member on Louis CK’s Lucky Louie sitcom, which aired for one season on HBO in 2006.

Norton played CK’s perverted pal Rich through 13 episodes that glowed with bittersweetness and welcome irreverence, but the series was cut short after critics attacked it.

“Well, I love Louis, and I love the fact that the critics love him so much now, and so many of them realize what assholes they were with Lucky Louie. They bashed him. Louis got killed for that show. He ended up getting a lot of viewers, he had more viewers than a lot of new shows, but the critics didn’t like it, so HBO canceled it.

Of course, Norton has found plenty of opportunities since the end of Lucky Louie, as well, including a series of stand up specials on the EPIX network. He films his third EPIX special (set to air in April) in Boston in January, and he will be honing much of that new material during his stretch of shows in Buffalo from December 31 through January 3 at Helium Comedy Club.

With a two year absence from the Queen City, Norton says the recent wealth of celebrity breakdowns and screw ups have kept his comedic furnaces stoked.

“I’m definitely addressing Donald Sterling and Paula Deen and Bill Cosby and Jonah Hill, anyone that’s kind of gotten in trouble. ’Duck Dynasty’… all that shit has happened in the last year and a half.”