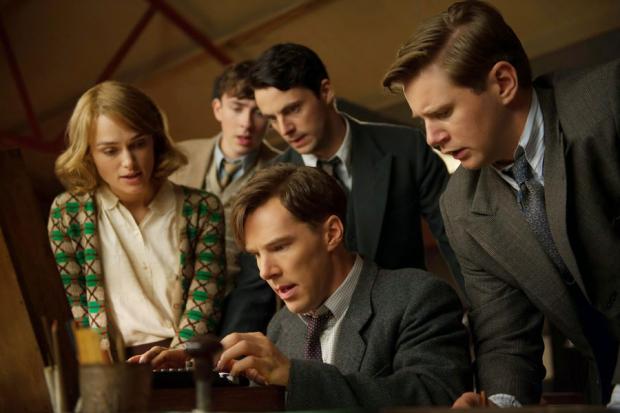 For about 30 years after the end of the Second World War, Alan Turing’s name was unknown to all but a very few. This obscurity persisted despite his crucial wartime role in a project that contributed to the Allied victory. It wasn’t until the mid-1970s that Turing’s signal part in the secret program to crack Germany’s Enigma code was disclosed. Until then there was almost no public mention of British intelligence’s code-breaking operation at Bletchley Park, a near-silence imposed by Britain’s stringent secrecy laws. The disclosures came about 20 years after Turing’s death by suicide, after two years of official harassment and persecution for being gay.

Since the lifting of that information embargo, Turing has become both a hero of the code-breaking program and as a martyr of the formerly oppressive, sometimes vicious treatment of homosexuals in the British Isles. Morten Tyldum’s The Imitation Game gives us Turing in both of these historical roles. The picture moves along smartly; there’s been an obvious and understandable attempt to filter and streamline Turing’s cryptographic history. Some, well actually a lot, of factual material would necessarily have had to be jettisoned and compacted to fit into a movie time frame. The movie puts its bet on the central character, Turing, cleverly and vividly impersonated by Benedict Cumberbatch. But Tyldum and writer Graham Moore have gone further and wrought changes in the record, exaggerating and inventing, “improving” on it. The tactic is not uncommon in biopics, but the filmmakers’ choices are dramatically conservative and audience-oriented.

Turing’s long-ignored and now celebrated achievement was to provide critical leadership and ideas in the British effort to break Germany’s daunting code that functioned through the use of Enigma machines, devices that could produce up to 159 million possible encryptions of military messages each day. Turing, a brilliant and  precocious young Cambridge mathematician, was inspired to construct an electromechanical computation machine that could run through an almost immeasurable number of possible combinations, far more than human analysts could ever manage.

The Imitation Game’s complementary dramatic engine revolves around resistance to Turing’s incomprehensible and very expensive idea, by both other cryptographers and his superior, Naval Commander Denniston (Charles Dance). In turn, this skepticism is spurred by the movie’s conception of Turing’s queer-fellow personality, his impenetrably self-centered cluelessness, and arrogant-seeming assurance. In the picture’s first half the effect is as if Peter O’Toole was playing Shaw’s Henry Higgins as a case of autism spectrum disorder. The film deftly uses this creative depiction for amusement and dramatic effect. (At one point, working alone in a corner, Turing is told by a colleague that he and the others are going to lunch. Turing takes this in as incidental information rather than an invitation.) Cumberbatch mostly succeeds in bringing the movie’s conceit off. His Turing is a kind of comic but poignant genius. It’s part of that creative concept that this genius is brought out of his solipsistic isolation through his relationship with a young Oxford math whiz (Keira Knightley) whose neglected talent and skills he recognizes.

Although the movie’s dramatic arc is consistently entertaining, the truth was at once more complex and more mundane. It must have proved really difficult to extract a useable narrative from Andrew Hodge’s long, dense, and somewhat stilted 1983 Turing biography, credited as a primary source. Despite the credit, there’s only a limited general resemblance between the book’s story and the movie’s portrayal.

Intermittently, Imitation Game shifts backward to Turing’s experiences at boarding school (Alex Lawther is the younger Turing) and forward to the cruelly stupid prosecution of him as a homosexual degenerate in the 1950s. Tyldum handles all this skillfully. Despite the historical hokum, the movie manages to make its points and to keep its story line involving.

Ironically, the real Turing, a shy, private man, if by no means an isolated recluse, would probably have disapproved of it.

Watch the trailer for The Imitation Game: