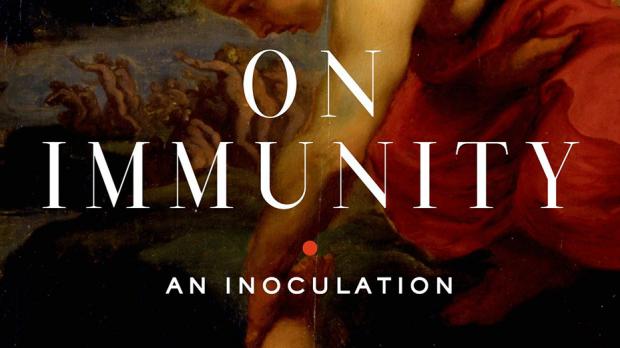 On Immunity: An Inoculation
By Eula Biss
Graywolf Press, 2014

“The British call it a ‘jab,’ and Americans, favoring guns, call it a ‘shot,’” Eula Biss writes in On Immunity: An Inoculation, her widely praised, deeply necessary book on vaccination and illness. “Either way, vaccination is a violence.” Observations like this, which are a product of the author’s uniquely inquisitive, humble voice, guide her project. The text arrives as the result of Biss’s years of research into every relevant discourse, including the argument she staged within herself during and after the birth of her son. By confronting in a rigorous way the conflicting, revealing presuppositions we have about vaccines and, more generally, the question of who gets sick and why, Biss has written a learned, fearlessly confessional study, and she has done so in an apparently flawless way.

Readers who approach On Immunity looking for a liberal rallying cry against anti-vaccine wingnuts like Jenny McCarthy may be disappointed. Biss guides the reader toward a new satisfaction, one born of investigative inquiry rather than an impassioned reiteration of argumentative talking points. Biss dispenses with McCarthy deftly and without delay. She observes that while there was a formerly dominant misperception that vaccines contain a host of dangerous bacteria, which was in fact the case as late as the early 20th century, this concern has been supplanted by a fear of supposedly unnatural chemicals:

“Now our vaccines are, if all is well, sterile. Some contain preservatives to prevent the growth of bacteria. So now it is, in the activist Jenny McCarthy’s words, ‘the frickin’ mercury, the ether, the aluminum, the antifreeze’ that we fear in our vaccines. Our witches’ brew is chemical. There is not actually any ether or antifreeze in vaccines, but these substances speak to anxieties about our industrial world. They evoke chemicals on which we now blame our bad health, and the pollutants that now threaten our environment.”

The rhetorical maneuver Biss uses here deserves a closer look, because it is essentially the reason On Immunity is one of the great recent works of nonfiction. Instead of becoming mired in a debate with the loud, angry, and uninformed voices that command the attention of the news media, she understands McCarthy’s factually incorrect claims as one product of a larger fear, a modern, nostalgic fear. We live in a time when the natural, the unadulterated work of Mother Nature, is of paramount value. Biss quotes naturalist Wendell Berry: “Obviously, the more artificial a human environment becomes, the more the word ‘natural’ becomes a term of value.” Hence the massive market for ostensibly natural treatments and therapies that have their roots in different cultural or religious traditions. The unspoken supposition is that these foreign ideas, with their strange words and unorthodox methodologies, are more natural, and that this is the case because the cultures that produced them are less technologically advanced than our own. The racial dimension here is essential. The Magical Negro and noble savage stereotypes in art are two examples of a larger racist tendency to assume that people browner than us are more spiritual, that they have a deep, inexorable relationship with the rich natural world from which we, by virtue of our hubristic pursuit of technological and scientific progress, have irremediably banished ourselves. This is essentially the plot of the Book of Genesis and Avatar. And Dances with Wolves and Pocahontas and The Blind Side. Biss writes,

“[W]hen comfort is what we want, one of the most powerful tonics alternative medicine offers is the word natural. This word implies a medicine untroubled by human limitations, contrived wholly by nature or God or perhaps intelligent design. What natural has come to mean to us in the context of medicine is pure and safe and benign. But the use of natural as a synonym for good is almost certainly a product of our profound alienation from the natural world.”

Biss gives equal weight to a discussion of scientific research in immunology and an investigation of the work critical theorists like Eve Kosofsky Sedgwick, Donna Haraway, and Susan Sontag have done on illness and the body. Biss reads the contemporary discourse to the letter, with periodic references to revealing etymologies of key words (“When the word inoculate was first used to describe variolation, it was a metaphor for grafting a disease, which would bear its own fruit, to the rootstock of the body”). This reinforces the fundamental principle of On Immunity: That metaphor, the structure of language, is inextricable from our bodies.

“Our understanding of immunity remains remarkably dependent on metaphor, even at the most technical level,” Biss writes, in what is a modest introductory sentence to one of the most clear and accessible explanations of this difficult touchstone of modern theory. Her survey of the language of war in medicine leaves no stone unturned. We anthropomorphize the microscopic cells and bacteria that keep us alive, we grant them the ability to “read” and “instruct” and “ingest” and “recognize,” we endow them with intent and self-awareness and the ability to attack invading pathogens like hoplites at Thermopylae.

Biss uses art, scientific research, myth, and her personal experiences to construct a comprehensive, unpretentious text. In particular, her consideration of Bram Stoker’s Dracula as a metaphor for our understanding of illness is lucid and impressive. In the end, she is not content to simply announce what she has discovered in her research, though her research is fascinating. Vaccination protects the vaccinated person, but more importantly it prevents disease from spreading to populations that do not have access to vaccines. This is why children at birth are vaccinated for hepatitis B, which at first glance seems unnecessary: It is only statistically unnecessary if you are rich and white, and even then that is only if you consider a single child more valuable than many thousands of vulnerable children. “One of the mysteries of hep B immunization,” Biss writes, “is that vaccinating only ‘high risk’ groups, which was the original public health strategy, did not bring down rates of infection.” The mere idea of a risk group, Biss quotes Sontag, “revives the archaic idea of a tainted community that illness has judged.”

Illness, then, is a metaphor. It means something other than what it is — but even that formulation is incorrect. Rather, it is something other than it seems. Language is not just a set of labels we have for things with their own “real” identities; language sculpts and alters even as it describes. (Heisenberg’s principle of quantum uncertainty was discovered in 1927, the same year Virginia Woolf published To the Lighthouse.)  Biss reminds us of that, and of all the many things we mean when we speak—the unknown knowns.