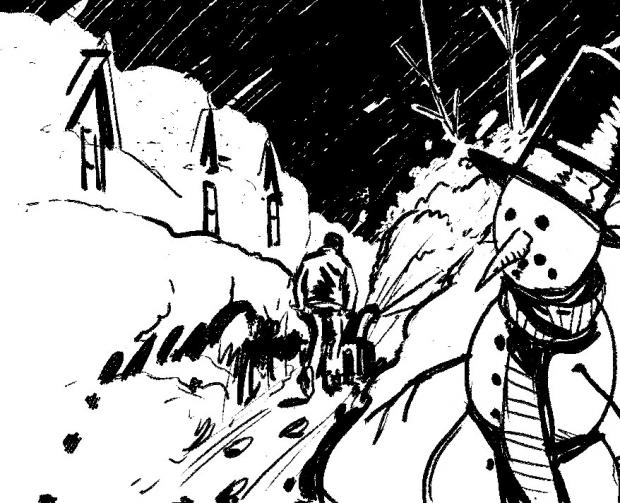 I had just taken a seat on one of the bar stools at Blue Monk when I heard him.

“Eight bucks. That’s a joke, right? I only ordered one beer.”

At the other end of the bar clad, as always, in a worn flannel shirt, faded jeans, and his decades-old construction boots stood Dominic Stanislaus Pilarski. I had known Dom, as he is commonly called, since I was knee-high. He, a carpenter and steward for that trade’s local union, had worked with and befriended my father, a drywall contractor.

Behind the oak stood a puzzled barkeep. He rested his palm over the part of his hair for a moment then moved his fingers down to his salt-and-pepper beard, sifting through its bristles. “Well, sir, it’s an import. From Belgium.”

“Did the guy who sold it to you swim it over here himself?” Dom said.

Sensing an opportunity to relieve the barman, I stood up and walked over to say hello to my old friend.

I tapped him on the shoulder. He turned around, looking annoyed. As he recognized me his furrowed brow loosened, and he gave me a great bear hug, then tousled my hair.

“What are you doing here?” I said—a fair question, given that Dom’s preferred haunts are old East Side gin mills in the Broadway-Fillmore neighborhood where he grew up.

“Well, at Thanksgiving my nephew gave me one of those Sam Adams beers. I told him I liked it and he got me a card for this place.” Dom took a sip of the tripel he had ordered, foam clinging to his mustache as he pulled the glass from his lips. ”This stuff is good, but eight bucks? It ain’t that good.”

My uncle Dave had told me that Dom had been buried under six feet of snow out in his Cape Cod in Cheektowaga during the storm that had grabbed national headlines a few weeks back.

“How bout that snow?” I said, cringing at the provincial sound of the question.

“Holy hell, kid,” Dom said. “I thought I was never getting out.”

“Some people didn’t. I can’t imagine how horrible it must have been for the families. Such an ordinary thing for us Buffalonians. Snow. And they didn’t make it.”

“Yeah, It’s awful,” he said. “But there wasn’t anything ordinary about that storm. Same thing happened in ’77. Lots of folks didn’t make it then too.”

Dom’s eyes then drifted towards the ceiling and we stood in silence for a moment while he formulated a question for me.

“You’re a reporter guy,” Dom said. “Let me ask you something.”

“How did it take them so long to clear the streets in some towns?” Dom asked. “My cousin Paul is over in Lackawanna. Plows didn’t get to him for over a week.”

“Well, from what county and town representatives were saying, the amount of snow was unprecedented, meaning that even with all the available manpower, help from other areas of the state, and equipment on loan from the North Country meant to deal with some of the worst conditions imaginable, it still took time to clear the streets.”

“I mean, you got Cuomo running around promising the moon and the stars on TV and still Pauly had to hitch a ride to the store on his neighbor’s Ski-Doo,” Dom said. “Worst part was, he got to the store and there wasn’t any milk or beer left.”

“We all know there’s not a politician that doesn’t love a camera,” I said. “But the fact that the governor was here and stayed overnight spoke to the seriousness of the situation. He visits Western New York often but he rarely stays the night. And I found the response from other communities, as far away as New York City, to be impressive. Galvanizing even.”

“Then you got Poloncarz and all these town jokers pointing fingers at each other over some computer system,” Dom said. “Meanwhile it’s guys like Pauly that pay their wages that are suffering.”

“It’s true. The pettiness of local politics continually confounds me,” I replied.

Dom fell silent for a moment and surveyed the bar. Relatively empty when our conversation had started, the place had grown loud, warm. A tall man with slick, black hair in a dark suit, purple shirt, and skinny black tie standing a head above his compatriots, smiling as he continuously interjected into their conversation, drawing a round of laughs each time. A short guy with a thick build, a massive beard, flat-brimmed Bills hat, and tattooed forearms quietly pondering some mystery, chatting with the bartender every once and again as he ran from tap to tap. A mother and daughter, both wearing sporty fleece jackets, both with their hair neatly pulled back, paper bags with neat logos printed on the side at their feet as they dined.

Dom was a visual aberration but appeared as comfortable in the Elmwood Avenue beer joint as he’d be at the end of the bar at the G&T Inn.

“Yeah, I guess,” Dom said, his eyes continuing to scan the crowd. “Just seems to me a lot of times what’s coming out their mouths don’t match what’s happening.”