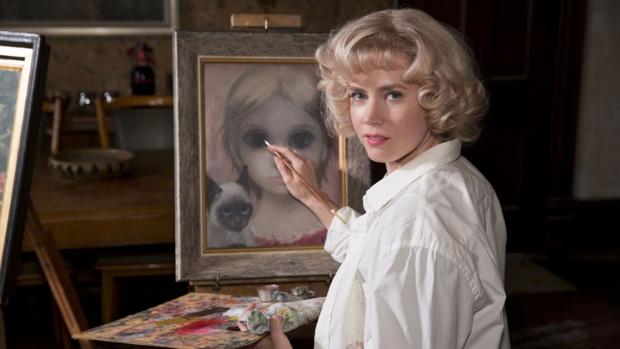 Don’t get the wrong idea when I tell you that Big Eyes is the new film from Tim Burton. I address that particularly to those of you who almost stopped reading when you saw that name. There are of course many fans who still love his macabre whimsy, no matter how arbitrarily plotted his films may be. But just as many viewers have given up hope of ever seeing another film from him that offered anything beyond a candy-colored parade of special effects.

Perhaps in the hope of proofing that he can connect with mainstream audiences again, Big Eyes is as conventional a film as Burton has ever made. It’s a biopic of Walter and Margaret Keane (Christoph Waltz, Amy Adams), the couple responsible for the kitschy paintings of young children that were a sensation in the early 1960s.

Even if you’re not old enough to remember the era, you know the style—thrift stores are still filled with Keane prints. The children were usually in ragged clothing, dominating whatever cityscape backgrounded them, staring at you with preternaturally huge, black eyes. Were there tears in those eyes? If so they were redundant. They stared at you accusingly, mournfully, demanding that you pay attention to them.

In the days before Andy Warhol, they turned the art world on its ears. Critics hated them, all the more so for their popularity. The film opens with a quote from Warhol: “I think what Keane has done is just terrific. It has to be good. If it were bad, so many people wouldn’t like it.”

Burton, who began his own career as a painter and is an avowed fan of Keane,  avoids Big Questions about the nature of art. (Does popularity make something “good”? You can argue about that on the way out of the cinema.) Working from a script is by Scott Alexander and Larry Karaszewski (Ed Wood), he sticks to the couple’s biography, which starts out as a lark and ends as a low-grade tragedy. The real painter, it seems, was Margaret, but Walter took all the credit for her work. He stumbles into it unintentionally, but the huckster in him realizes that he can sell these better than his shy wife. (It’s a character that encourages Waltz to overact, something we’re not surprised to find he’s capable of.) Success makes him into a monster and her into a wretch, a one-woman assembly line grinding out canvases as fast as he can sell them.

At least, that’s how the film tells it. Alexander and Karaszewski have written other oddball biopics (The People vs. Larry Flynt, Man on the Moon) that have happily jettisoned facts or manufactured events. (Most of the last reel of Ed Wood is sheer fantasy.) The climactic trial that establishes Margaret’s authorship of her work actually happened (though 20 years later than the film implies—a problem it shares with Foxcatcher). But the actual case is rather messier, at least according to accusations made by Walter’s daughter Susan (posted at bigeyesmovie.com).

(That Alexander and Karaszewski include a narrator who introduces himself by smirking “I make things up for a living—I’m a reporter” is an egregious case of the pot calling the kettle black.)

Burton confines his visual interest to recreating the hipster paradise of San Francisco in the late 1950s (where the Keanes lived) and in such other flourishes as a visit to Hawaii awash in blue and pink pastels: The one previous Burton film it resembles is Edward Scissorhands. What keeps Big Eyes from being anything more than a holiday diversion is that he and his writers can’t get much drama out of the paintings themselves, or the inexplicable fascination they held for so many people. (You look at them now and wonder, why would anyone want one of these in their house?) They’re only a MacGuffin for a story about two sad people.

Incidentally, because you may be wondering (I did): They’re no relation to Bil Keane, creator of the toothache-inducing comic strip The Family Circus.

Watch the trailer for Big Eyes: