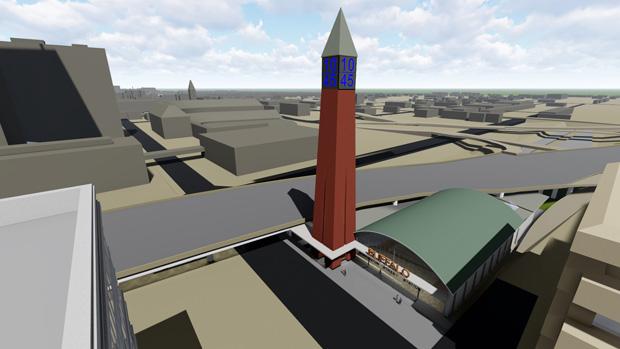 From Tim Tielman’s proposal for a new Amtrak station, facing Washington Street, adjacent to the current station on Exchange Street.
by
Bruce Fisher
/ Dec. 21, 2016 12am EST

Two years ago, Tim Tielman began shopping a design for a new downtown inter-city train station right across from the current Exchange Street station, whose ceiling collapsed this past September.

As clever as Tielman is, this design—for making a better-functioning train station along the New York-Toronto line—was just sensible, not revolutionary or fanciful or even particularly European. Big American cities have big, functioning train stations where suburban commuters, long-distance travelers, students, and car-less workers walk from train to streetcar or subway or bus, taxi, or limousine. The train stations are near offices, hotels, parking ramps, sports arenas, restaurants, and saloons. That’s how it’s set up in Toronto, New York, Chicago, Washington, Montreal—even in Los Angeles, that most car-centric city.

The Exchange Street Amtrak station is two-tenths of a mile from the new Courtyard Buffalo hotel at Canalside. It is four-tenths of a mile to the Ellicott Square Building. It is just under a mile from the US Federal District Court building on Niagara Square. For the 200 people a day who ride the Amtrak train from Buffalo to points east, many of whom are lawyers, civil servants, or students, the most positive attribute of the Buffalo train station is that it’s next to everything.

But that’s not how the conversation is going.

The long limbo of Buffalo’s Central Terminal has become central to the discussion of Buffalo’s train connectivity. Issues of community development, racial preference and prejudice, plus the concern whether any federal transportation grants would actually make it to Buffalo’s iconic train terminal in the aftermath of the “bridge to nowhere” calamity, have arisen among the usual displays of planners, real-estate developers, and others who feed off public money, and who say, in chorus, Build mine first.

Approximately 200 rail passengers a day use Buffalo’s stations. As former logistics pro Patrick Whelan recently pointed out in the Buffalo News, the unreliability of Amtrak’s schedule (mainly due to poor track conditions) makes rail travel uncompetitive for many with access to a car. Whelan, among others, wants any new investment into the functionality and timeliness of the system—and a new ceiling in the Exchange Street station wouldn’t require millions.

But fixing tracks isn’t going to get politicians any photo-ops. The most salient political action here, as everywhere, is to build something that voters can see.

And the discussion of the huge, partially demolished, no-longer-functional concourses of the Central Terminal is a painful reminder that we have abandoned or destroyed much of what we used to rely on to move people and goods around here.

Buffalo was the American city that in the early 20th century exemplified multi-modal transportation precisely at the Erie Canal Harbor synapse of lake freighters, canal boats, railroad stations, and streetcar lines, almost all of which is gone because, after World War II and the onset of automobile hegemony, the pieces were removed. The electrified streetcars, powered by Niagara Falls, were gone before the Robert Moses Power Project came on line in 1961, just a couple of years after Buffalo ceased being a major Great Lakes port. In 1962, the Delaware Lackawanna and Western terminal, on the Buffalo River behind the hockey arena, was closed due to lack of traffic; most of it was demolished in 1982. As for the Central Terminal, the last train, the Lake Shore Limited, left for Chicago in 1979. The Amtrak service linking Toronto to New York City via Buffalo links at the Exchange Street station. The Lake Shore Limited still goes to Erie, Cleveland, and Chicago, but from Depew.

The Central Terminal Restoration Corporation (among whose founders was Tim Tielman) has had unparalleled success as what former Erie County Legislator Greg Olma calls “a bottom-up restoration project.” Olma credits former Erie County Executives Dennis Gorski (D) and Joel Giambra (R) with having recognized the value of stabilizing the tower. A dozen years after the structure and its extensive grounds were transferred to a not-for-profit, there is a record of milestones achieved, from restoring the clock, many windows, and the space itself as a destination for everything from movie shoots to performance-art projects to model railroad shows. There’s a new developer hired, with a promise of mixed-use housing and office space, and there’s the ongoing green infrastructure project on the land itself.

But Amtrak’s own study of potential routes for connecting Buffalo-Niagara Falls International Airport to downtown with the kind of trolley, tram, or light rail that is normal in every big North American city does not bring the Central Terminal into the picture. And even if the Lakeshore Limited and the New York-Toronto trains were brought to Paderewski Drive, the throughput of eight trains a day would not be sufficient to sustain a coffee shop or any other on-site business. The promise of the latest developer—to use profits from creating market-rate housing and office space to fund restoration—seem overblown, given the regional oversupply of housing, the stable or shrinking population, and the vast oversupply of developable land that lies between the Central Terminal and Canalside nearly two miles distant.

The need to develop the Central Terminal won’t go away, nor will restoration of a handful of daily trains be an economic driver. Separating the discussions into the adaptive re-use file and the inter-city train file seems logical, despite the recent large investments of political capital into the Central Terminal by US Representative Brian Higgins, Assemblywoman Crystal Peoples, and Common Councilman David Franczyk. Everybody wants a success. Everybody sees potential. But the Central Terminal is long way from where the buses, the hotels, the offices, the entertainment, and the workaday world of current and prospective train-users are.

The Toronto-Buffalo-New York train connection still works. Many hope that the US Customs and Border Patrol would get over their issues and boost the rationale for train travel quickly, by cooperating with its Canadian counterparts. Homeland Security could agree to have on-train customs inspectors who could board in, say, Hamilton, do their document-checking, and thus speed the transit time for Buffalo-bound passengers. (In European countries that are part of the Schengen Zone of free travel, nobody has to show passports or visas when crossing international borders on trains, planes, or buses.)

Tielman dreams of a $50 million Washington Street train station to replace the Exchange Street station. (Note the price-tag: Compare it to what the Erie County, New York State, and the US spend on low-traffic rural roads and bridges, and it suddenly doesn’t look so large.) The distance between a Washington Street station and the hotel at Canalside would be the width of Washington Street rather than the two-tenths of a mile walk from Exchnage Street. And the reason the place would cost $50 million instead of the price of some ceiling-tiles? Because the train station would be a truly multi-modal facility, with buses, the Metro Rail, and a place for cars.

When he was New York State Assemblyman for the West Side of Buffalo, Sam Hoyt proposed such a multi-modal center on the site of the former War Memorial Stadium. Hoyt didn’t return a call on this issue, but his plan of a decade ago, like the plans of various other engineers and consultants, is similar to Tielman’s: All focused on the existing intersections of rail, light rail, buses, and cars.

In Tielman’s presentations, the language is both historic and prospective. “This is where there were four train terminals in the early 20th century,” he says. “This is the place where we can achieve the ‘friction’ and the positive externalities that just won’t be available at the Central Terminal because it’s just not connected.”

Should there be any investment beyond replaced ceiling-tiles to get Exchange Street functional, the new issue is whether President-elect Trump’s team will invest in anything at all in a Blue City in a Blue State for a public transport mode that Republicans have tried, over and over again, to wipe out.

Perhaps that view will persist. Perhaps there will be chaos that has to be waited out. The business case for federal help for accommodating train traffic in Buffalo is going to have to be stronger than what we now argue over—an abandoned Central Terminal or a low-traffic hut under a highway. Can that case be made?