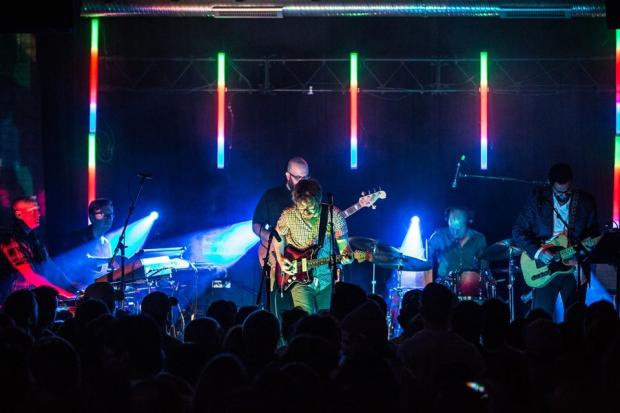 Two talented bands, Ithaca-based electronic rock band Jimkata and Buffalo-based indie rock band Lazlo Hollyfeld, have cooked up a pretty special New Year’s Eve party this year at the Town Ballroom. They’re dubbing it Wild Ride NYE and it’ll feature headliners Jimkata, who will perform their highly danceable electronic rock tunes—including songs from their latest record, In Motion. But before Jimkata takes the stage, locals Lazlo Hollyfeld will dive into the music of disco-punk band LCD Soundsystem, which they’ve only done one other time—at buffaBLOG’s  Halloween party—and for which they’ve added members to the band just to be able to pull it off. This week we talked to Sonny Baker, frontman of Lazlo Hollyfeld—and in this instance James Murphy impostor—about why they do what they do.

How did the LCD Soundsystem set come about?
I had this idea to do it and then I was talking to Mac McGuire [fomerly of buffaBLOG] at Porchfest or something, and we were talking about how cool it would be if someone did that. I was, like, maybe Lazlo should just do it. We were going to do it on Halloween last year and it didn’t work out. Then after we did the Radiohead one at Iron Works, we were, like, we have to have Dave Calos and Chris Groves and maybe some more people do it with us. It’ll be so fun.

You’ve also cover the Talking Heads yearly on the night before Thanksgiving, and this summer you started covering Radiohead’s record In Rainbows. Will the band continue to do Radiohead cover shows?
Not sure yet. I think if we do it again it’ll be a different album or a different collection of tunes. But I don’t think we’re going to do In Rainbows again. If we do something like that it’ll be a couple songs off of it.

How have you chosen this small group of bands that you cover?
It’s our favorite stuff. The LCD stuff we were talking about for a couple years and it never came to. And then In Rainbows, we were playing a show in Jamestown and we were on the ride there and we hadn’t listened to it in a while. We put it on and we were, like, “How awesome would it be if we did this? This album rules.” Then Talking Heads have been our favorites forever.

How was learning the LCD Soundsystem set different than learning the Radiohead stuff?
We all kinda thought it might have been easier, but it wasn’t. A lot of the Radiohead stuff, there’s a verse, chorus a bridge, a guitar part, or something like that. The LCD Stuff is just like endless lyrics. And the songs—you might ride on something for four minutes and then something happens —there are so many little intricate things, that me, as a fan, if I was in the crowd I’d want to hear that little tiny part, even though it happens once. Same with Radiohead, but it just felt like there were so many more little things. In Rainbows, I was able to memorize all of the lyrics and not look at anything. For LCD I can’t. [He laughs.] I’m trying, I’m going to try really hard, but I don’t know.

So, how do you channel your inner James Murphy?
I kinda take some of the David Byrne, I guess—throw that in there a little bit. I mean, [James Murphy] does that. I’ve been listening to them for so long and seeing the songs, it’s hard to not mimic it. It just comes out naturally, I think. He doesn’t dance around too much, but I can’t help it.

How do you decide which LCD Soundsystem songs to do?
Well, obviously you want to pllay the hits, if you can call them hits—the fan favorites. It’s hard to dive deeper into some of those older tunes and stuff like 45:33. That stuff would have been so hard. It was really just a matter of—we have this amount of time, what’s the max amount of songs we can do? Some of the songs are kind of long, and then each one of us had our favorites. We all kinda got a pick of one. I was really obsessed with that London Sessions they did. That was the start of “Okay, this is them in a studio just doing all of this live.” I thought that track list in particular—we have to look at all of these songs. I like to listen to the studio stuff but if we’re going to play it live it’s cooler to pull out the little things—like he switches lyrics around on some stuff, some things are played differently. We also listened to the Madison Square Garden show and tried to pick from there.

How did this show with Jimkata come about?
Lazlo has played with them many times. They started playing with them longer than I’ve been in the band, in the early 2000s or something. That last few times they’ve come around we’ve played with them, so this time they reached out and they heard we did the LCD stuff and they wanted us to do a little bit of both—we’re going to do some originals and were’e going to do some LCD.

The band right now includes Matt Felski, Scott Molloy, Chris Gangarossa, and you guys have added members to the band specifically for these LCD Soundsystem sets—Chris Groves and Dave Calos. But now they’re kind of in the band permanently?
Yeah, it’s kinda working out that way—where we really love playing music with each other and it seems silly just to use it for other people’s music. We all mesh really well, so I’m really exicted to start writing, which we haven’t done with them yet.

What is your stance on your original songs? Are you writing a lot? Are you focusing on what you have written?
We’ve written a bunch over the last few years but we haven’t had a chance to record anything. We’ve gone through a couple different lineups, so we’re going to play some stuff from before I was in the band and were’e going to play stuff that I wrote with the band, then after the show we’re going to take at least a few months to write a lot of new stuff and hopefully have a new album out by spring.