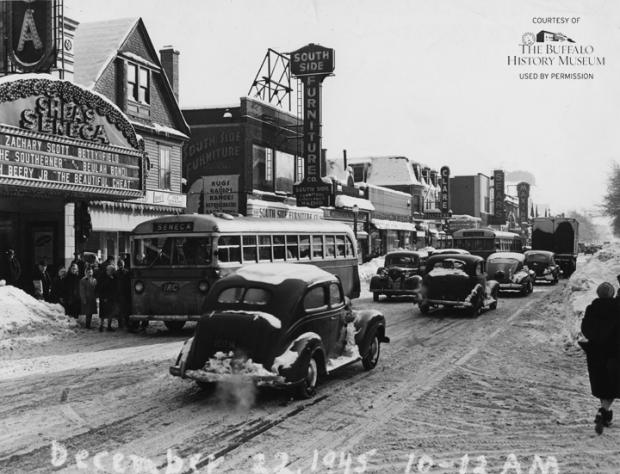 by
The Public Staff
/ Dec. 21, 2016 12am EST
“Shea’s Seneca promises to be a monument to the genius of Michael Shea, who has had 50 years or more experience in theater-building and show-producing in Buffalo. Besides being the largest of all the community theaters, having a seating capacity of 2,500, it also will be the most beautiful. It will prove more than anything else, the confidence Michael Shea has in the future of South Buffalo.” —Buffalo Courier-Express, January 12, 1930
The intersection of Seneca and Cazenovia streets was effectively “downtown South Buffalo” in 1945, the year that this photograph was taken by John DeBus. In the three or four blocks between Zittel Street and Indian Church Road, 98 business were in operation along Seneca Street (compared to 17 today). Visible, from left to right, are the Shea’s Seneca, Love’s Confections, South Side Furniture Co., Mohican Market, M. H. Fishman department store, Clare Millinery, Glickstein Jewelers, Sears & Roebuck department store, and Maxine Theater. Shea’s Seneca, opened in 1930, was the center of activity and anchor of the neighborhood. Designed by Henry L. and William T. Spann, the 2,042-seat movie house was modeled after Shea’s Buffalo, without the balcony. The Southerner, the 1945 film featuring Zachary Scott as Sam Tucker, a Texas cotton picker who decides to start his own farm, is listed on the marquee. In 1969, the movie house closed and the auditorium was demolished, leaving behind only the enfronting lobby and shops. In 2016, developer Jake Schneider announced a plan to revive the long-neglected complex with a mix of apartments, a theater, and performance space. Shea’s Seneca will be an anchor once more.