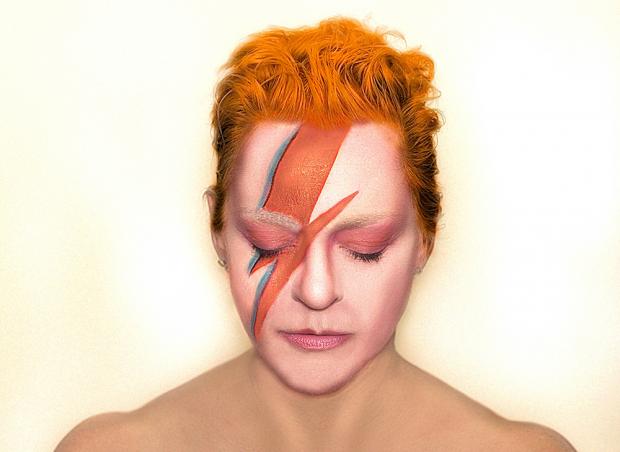 Currently on show at Squeaky Wheel, artifacts of a proposed collaboration by former area artist Kathy High with one of her heroes—David Bowie—that couldn’t be completed due to his precipitate demise earlier this year. Among other of her works incorporating science and technology and politics. Some of her projects from the last dozen years or so.

We honor our heroes by imitating them. We try to be like them in various ways. High’s proposal was to become like Bowie in a very real way.

What she proposed was an exchange between the two artists. What she offered Bowie—as her part of the exchange, but also, it would seem, a straightforward homage gift from a fan—was a series of photo self-portraits in costume and pose and makeup imitative of iconic Bowie images. The Aladdin Sane album cover with the schizophrenia facial lightning bolt. The Heroes album cover enigmatic pose. Somewhat in the Cindy Sherman mode. But Kathy High—particularly as dressed and posed and made up in the photos on display—does look a lot like David Bowie.

But part of the idea of the photos was also to demonstrate her and Bowie’s compatibility. Because what she was asking Bowie for—as his part of the exchange—was some fecal matter. What she was ultimately proposing was a fecal transplant. To transplant his gut biome into her system.

High suffers from Crohn’s disease, a chronic inflammatory bowel disorder, and has researched the emerging science of fecal transplants, and determined a fecal transplant—with Bowie as donor—could alleviate—or have alleviated—her Crohn’s condition. Plus provided other benefits through her transformation in part into her hero.

“This goes against all the ‘rules,’” she said in her proposal letter to Bowie. The donor “should be someone close to me, someone under sixty, pre-tested, etc.”

But she goes on, “I am a life-long fan. I have been following your career since I was little…I feel like a younger sister.”

She hopes he “will look upon this strange request favorably…you could change my life forever,” she says, referring to the Crohn’s matter. But in addition, “if I could become you…well, say no more…”

Other works are about animals. Including transgenic animals, which is to say, animals injected with other species’ DNA, usually a diseased human’s DNA, transferring the human disease to the animal, to allow experimentation on the animal, to try to cure the disease without having to experiment on the human. A video game called Trans-Tomagotchi, featuring virtual lab animals the human player—that is—theoretically—the sick human for whom the animal, now infected with the human’s malady, serves as experimentation surrogate—has to give regular doses of food, water, medicine, and affection. (Remember the former fad Tomagotchi digital pets. A fad that died out after it was discovered how much care and attention the digital pets required. While the Trans-Tomagotchi animals are sick to start with.)

Another work involving lab rats consists of a little glass dome over a mini video monitor showing an image of the artist recumbent in a hospital gown while white rats crawl around and over her, comforting her and being comforted in turn, apparently.

Another work is about cloning. A video projection featuring bees and flowers and what at first glance looks like a lesbian encounter but turns out a clones encounter. Concluding with a statement by former President George W. Bush to a conservative religious group on life and human dignity. Per usual disingenuous and hypocritical.

Another sculptural work with video is called Red Scare. A huge glass test tube at the bottom of which is another mini monitor, showing the artist fallen into a fiery pit of some sort, appealing desperately—but seemingly to no avail—for help to get out.

Two of the artist’s more substantial—full narrative—videos were screened at the opening. Fecal Matters, a documentary on work being done at present on fecal transplantation. And Lily Does Derrida, narrated by Lily, a canine in the care of the artist until Lily’s death of age and attendant infirmities, including in Lily’s case blindness. Lily discourses on her relationship with her caretaker and her reading—that is, Lily’s reading, pre-blindness, of course—of some works of French deconstructionist philosopher Jacques Derrida, particularly his book, L’animal que donc je suis.