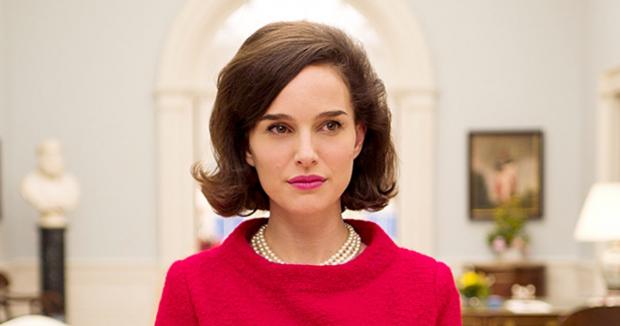 Natalie Portman in Jackie.
by
M. Faust
/ Dec. 21, 2016 12am EST
Ancient cultures usually had many gods who oversaw different areas of the world and life. I sometimes like to think that there’s a god who oversees movies. He’s been a bit of a slouch in recent years, feeding his children on junk food and candy. But this holiday season, perhaps in recognition of the fact that the world is presently a very scary place, he has decide to shower us with his blessings. The coming few weeks are a very good time to go to the movies.

In Jackie, the first thing that strikes you is the voice. It’s not what you’re suspecting: breathy, with a bit of a lisp, almost otherworldly. Even so many years after her time as First Lady, we know the appearance but not the voice of Jacqueline Kennedy.

I can testify from firsthand experience that Natalie Portman, in what is certain to be an Oscar-nominated performance, gets it very right. In the early 1990s, when I made a living as an office temp in Manhattan, I worked for a bit as an assistant to an editor who had just left Doubleday, where Jackie Kennedy worked for the last two decades of her life. They were friends, and I occasionally took calls from Jackie. She tended to be chatty when leaving messages, and you could hear the cigarettes in her voice. I’m sure we never spent more than a minute or two on the phone, but she sounded like, to use a phrase no one probably ever used to her face, a great old broad.

This new film is not a biography of her life but a portrait of her at what was presumably the worst week of her life: the period between the murder of John Kennedy, shot in the head by a rifle as he sat next to her in an open convertible in Dallas, to his funeral. It had already been a very hard year for her after the death of their third child a few days after his birth. And the whole experience of being the First Lady was difficult for a woman who was educated, unwilling to be reduced to the role of decorative spouse. Now, having started to get a sense of her place in the world, she finds it all taken away. She wields power and commands respect, but she knows it is fading fast.

Directed by Pablo Larraín, the Chilean whose last two features No and The Club were both Oscar contenders, Jackie is an intimate, chiseled look at a woman in crisis. It is blunt without being disrespectful. Shot on 16 mm, it is almost wholly contained in Portman’s performance: after opening on a close up of her face, it puts her in every scene, practically every shot, and she proves equal to the challenge.

And present circumstances give the film more power than its makers could ever have expected, or wanted. As Jackie, who was so concerned with restoring the history of the White House and the inspiration her husband’s office gave to so many people (she was primarily responsible for the phrase “Camelot”) watches all of that slip away, taken from her and from the country by an injustice that we know was never satisfactorily addressed, the office taken over by a famous vulgarian, we can’t help but think how history repeats itself.

In Fences, the first thing you hear, even before an image appear as on screen, is the voice of UB theater professor Stephen McKinley Henderson (who is also in one of the year’s other best films, Manchester by the Sea). Which works out well, because it got a big round of applause at the screening I attended but let us get that out of the way without losing any of the dialogue. That’s a blessing because the lines in the first act of August Wilson’s much-awarded play are sharply honed, like the rat-a-tat-tat of classic screwball comedy dialogue. The effect is so musical that you sometimes have to remind yourself to pay attention to what the actors are actually saying, rather than simply enjoying the sound of the delivery.

As humorously as it begins, with Henderson and Denzel Washington as garbage collector sharing a bottle of gin at the end of a work week, Wilson’s play is not a comedy. Set in the 1950s, it is as lacerating a portrait of American manhood as Death of a Salesman. Washington also directed, having played the role of Troy Maxson on Broadway in 2010 alongside Viola Davis, also back for the film. It’s not a natural role for Washington’s strengths, or at least it doesn’t seem to be: Like Tom Cruise, his appeal is based on projecting competence and confidence, characteristics that Troy only pretends (at least at this late stage of his life) to possess. But he makes that disjunct work for the role. As he reflects on the journey of his life, comparing a small victory—a promotion to driving the garbage truck—with larger past failures, Troy is a powerful tragic figure. He is far from flawless, and his flaws are not noble ones, as his wife (Davis is tremendous, as she always is given a worthy role) knows too well. Playwright Wilson wrote the screenplay, and resists the effort to open the play up too much. If it sometimes reminds you of its origins on stage, it’s worth remembering that that medium offers dramatics potentials that can’t always be found on film.

In 1986, Saroo Brierley (Sunny Pawar) was a five-year-old boy living with his family in a small village in India. They are very poor, crowded into a one-room building, and despite his youth Saroo would like to be of some help, so he convinces his older brother to take him along on his job as a night laborer. Some bad things happen and he finds himself on a decommissioned train that he can’t get off of until it arrives in Calcutta, nearly a thousand miles away. Here they speak Bengali instead of his Hindi, and no one has heard of his town. After several years of Dickensian adventures he is adopted by a childless couple (Nicole Kidman, David Wenham) in Australia. Despite the loving care he receives, as an adult (now played by Dev Patel) he is consumed by memories of the family he lost and the pain they must have suffered, and sets about to find them.

Lion is the Weinstein Company’s annual shot at Oscar gold, a task the studio used to accomplish effortlessly. Their theatrical output has slowed to a trickle, with Sing Street the only other memorable feature of the handful of films they released in 2016.

Based on a true story, it’s a very appealing film, but an oddly shaped one. Even the meaning of the title doesn’t become apparent until the very end. I’m not giving anything away to say that the film ends with a reunion, pretty much the one you’re expecting. But it doesn’t get where it’s going the way you expect: Saroo does his searching not on foot or train but by using Google Earth, which dissipates some of the drama we’re expecting. We’re expecting that partly from habit and partly from the movie’s picaresque first half, as Saroo tries to survive on some of the meanest streets in the world. (Sensitive viewers, a class which I seem to have joined in recent years, are advised that this stuff is harsh but not nearly as much as it could be.) The conflicts of the second half almost seem to come from another film, though this part benefits form the fact that Patel, like Patrick Dempsey, has grown from a pleasantly geeky young man to an almost ridiculously handsome adult. In any other year, this would be the film of the season to see. It’s still worth your time, just not top of the list.