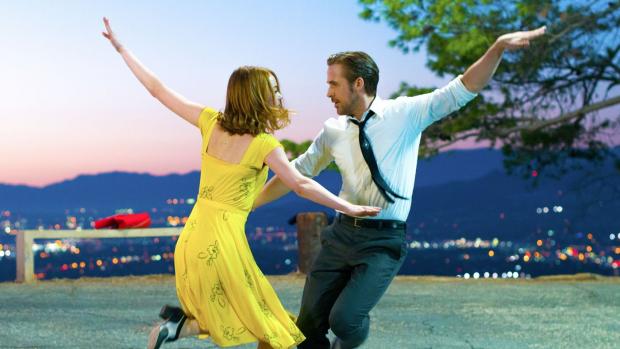 “Here’s to the fools who dream,” sings Mia (Emma Stone), an aspiring but unemployed movie actress, in Damien Chazelle’s La La Land. She’s moored in frustrating obscurity as she suffers through an unrewarding series of Hollywood auditions and tries to sustain her own dreams. Fundamentally, La La Land is about the struggles of unrecognized performing and creative artists to escape that dismal obscurity.

More obviously, it’s the love story of Mia and Seb (for Sebastian), and their search together for a measure of individual success in LA. Seb (Ryan Gosling) is a short-circuited pianist trying to protect and reinvigorate jazz in a crassly indifferent world. “The music is dying,” he tells Mia, but he’s insistent: “Not on my watch.” Seb wants to run a club that serves up chicken dinners and unadulterated jazz.

In Mia he’s found a less than simpatico partner. Jazz is a lot of dissonant noise to her. So he takes her to a club and tries to explain the history of defiant innovation and fierce doggedness of people like Sidney Bechet, King Oliver, and Louis Armstrong that led to what they’re hearing on the bandstand. Whether Mia actually gets it is never entirely clear, but she gets, and believes in, Seb. And self-certain and -absorbed as he is, he roots for her. Stone and Gosling produce a performance synergy that’s appealing and convincing. Chazelle’s movie often falls short of seamless plausibility; it isn’t even aiming for it much of the time. It’s a musical, if an unconventional one, and in its deceptively unreal milieu, this couple seems right.

Classic musicals are celebrations of technique and talent in the service of emotional excitement and even animal spirits. Nothing in La La Land recreates this spirit as much as the sweeping, large-scale, and intricate number that begins the movie, “Another Day of Sun.” Set on a ramp connecting two LA freeways, traffic-jammed motorists escape their vehicles to dance on their cars’ roofs and sing about the possibly undeliverable promise of a new Southern California day. Nothing in the movie approaches the dazzling dynamism of this opening, which only includes Seb and Mia as disgruntled bystanders. La La Land is really a much more intimate movie than this sequence suggests it’s going to be.

Chazelle’s last effort, Whiplash, was about dreams, too, those of a jazz drummer in a New York music school and the sadistic instructor who savages them. It was a hyperbolically melodramatic movie. La La Land is scarcely naturalistic, but in its way it’s truer to reality than the other one.

Part of this effect flows from Stone and Gosling’s singing and dancing. Neither of them is experienced in this kind of work, but it hardly matters. The movie doesn’t make outsized demands on their proficiency, and the result seems integral to their performances, which aren’t stylized or mannered. Their musical numbers are really subsidiary to the film’s poignant, but charming and (mostly) hopeful mood-making. After that opening, there really aren’t any boffo sequences. The closest is a sweet dance of courtship, a la Astaire and Rogers, with Seb and Mia dancing on a city overlook.

The New Yorker’s assiduously acerbic Anthony Lane fell for it, and compared it with Astaire and Cyd Charise’s Central Park pas de deux in The Band Wagon (1953), but while this one may be a little evocative of the other dance, the effect is rather different. The Band Wagon scene is a tribute to supremely professional and artificial accomplishment. La La Land’s is more modest and delicate and down to earth. La La Land is more reliant on drama, character and emotion than traditional musicals. It has its contrivances and arbitrary plotting, but the tone is more intimate.

In a way, La La Land is like a present-day Fame for mature audiences. If it’s never quite convincing, it can lull you into accepting its own kind of artificiality.