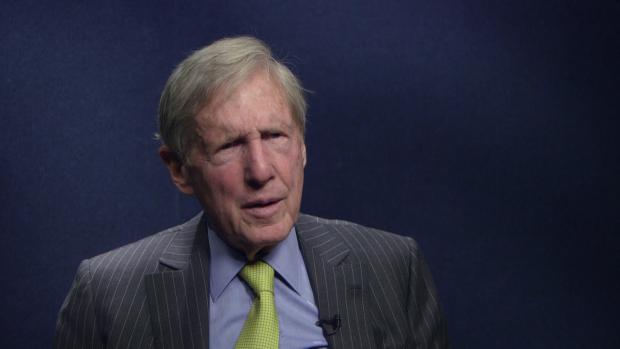 The unexpected passing of Bob Wilmers, chairman and chief executive officer of M & T Bank, is the inevitable moment that his many Buffalo admirers, associates, employees, and beneficiaries have contemplated, but not very actively, because at 83, Wilmers still worked at his offices in Manhattan and in Buffalo, still rode his bicycle, still met with politicians here and in France, where he owned a Paris apartment and a highly regarded winery a few miles from the city of Bordeaux.

A recent visit to his Paris neighborhood and to the vineyards and operations at Chateau Haut Bailly yields context to man whose career as an American banker enabled his French life, which included, earlier this year, a very significant token of recognition by that nation. In Britain, there is an annual list; the notable and the exemplary are on it receive knighthoods, the Order of the British Empire, Companion of the British Empire, and such. In the US, there is the annual Presidential Medal of Freedom award. In France, the republic that guillotined its royalty two centuries ago, there is the annual list of notable persons awarded the honorific title chevalier, knight. Bob Wilmers was made a chevalier of the officer class in 2017. The award was bestowed by his friend, Bordeaux city mayor and former French prime minister Alain Juppe, at Wilmers’s vineyard in Pessac-Leognan. In a profile in a Paris newspaper a couple of years ago, he spoke about his vineyard, and Wilmers playfully confessed himself thus: “Je suis un enfant avec trop de jouets” (“I’m a kid with too many toys”). He continued, “Ma banque, je l’adore!” (“My bank, I love it!”).

The Wall Street Journal recently noted that Wilmers held about six percent of the stock of M & T Bank, now valued at $120 billion. Until some very aggressive (and very time-consuming) acquisitions in New Jersey and in Baltimore, M & T Bank was a Rust Belt institution, focused mainly commercial lending and retail bank services in Upstate New York. A decade ago, M & T Bank had about 6,000 employees, most of them working in offices on Main Street in Buffalo. Nowadays, M & T Bank has well over 16,000 employees, mostly not in Buffalo. Wilmers kept an apartment in Buffalo, and a place on Central Park West in Manhattan as well as a Park Avenue office, and a weekend place in the Berkshires. The business that made him very rich was based in Buffalo, as were some of his personal charitable activities.

The chevalier recognition, however, came from his personal patronage of the Partner University Fund and the French-American Cultural Exchange Foundation. He was chairman of L’Alliance Francaise, whose US base is in New York City.

But the billionaire gave in Buffalo, too. Over the years, he gave millions of dollars in gifts to the Buffalo Zoo, Canisius College, art galleries, the Buffalo Museum of Science, and the Darwin Martin House, and smaller gifts to theaters, Cradle Beach, and other charities. A recent report shows that his personal foundation gave $600,000 to the Promise Neighborhood in 2011 and 2012, and more than $650,000 to Teach for America, the entity that supports non-union teachers for charter schools. Wilmers invested personally and with his bank’s staff time in a charter school, Westminster, with over $200,000 in foundation grants just in 2012 and 2013. As we’ve detailed elsewhere, Wilmers was a longtime critic of public education in Buffalo.

M & T Bank, which Wilmers ran for 34 year, invested tax-deductible advertising dollars in support of many Buffalo-area arts organizations. There is also M&T Bank’s charitable contributions, amounting to over $13 million last year from a $40 million corpus.

The old rule of civil society was De mortui nil nissi bonum, “of the dead speak nothing but good,” and so, as an aspirational adherent to rules of civility, we duly note that the late Robert Wilmers returned some of his gains to the community from which they came.

The other part of his legacy is that he has no obvious successor in the community. What Wilmers achieved, with his alliance with the late Stan Lipsey, publisher of the Buffalo News, and with their operative Andrew Rudnick, longtime president of the Buffalo-Niagara Partnership, was a decades-long coordination of political messaging about Western New York that many characterized as bullying, conspiratorial, and contradictory—because the anti-tax, anti-government pose of the business leadership in Buffalo masked a steady pattern of demanding massive public subsidies, most of them delivered by pliant elected officials, to projects that benefited the business leadership. Tracing that history would require a book-length study, only parts of which have been undertaken, because through the thorough penetration of the bank and of the business organization in the region’s affairs, it was the ethos and the manner Wilmers and his allies cultivated here that made the region’s reputation.

With the advent of Governor Andrew Cuomo’s regional economic development council, there is no longer a place for the quasi-monarchical figure that Wilmers was often seen to have been. The region, which has not grown in population since Wilmers arrived in 1983, yet which has steadily grown in economic strength, will have a very long study to comprehend what might have happened had he not done business here, in the way he did business here. For now, what is evident is that his presence was consequential, his efforts substantial, but Buffalo was only one of his places. Should M & T Bank remain in Buffalo, his legacy will probably endure longer than should the bank that he and his team acquired in turn be bought by faraway speculators who spend all their time where Wilmers himself liked to do his biking.