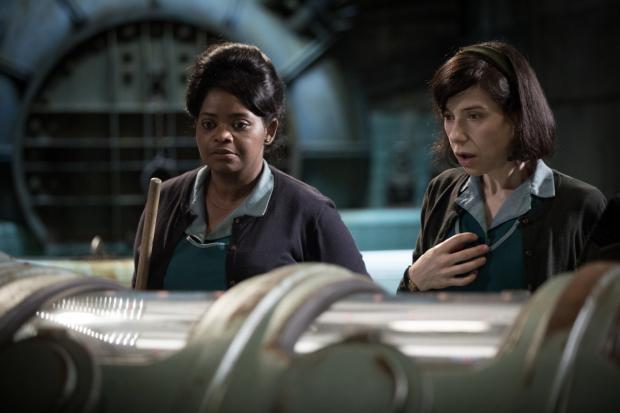 Octavia Spencer and Sally Hawkins in The Shape of Water.
by
Gregory Lamberson
/ Dec. 19, 2017 8pm EST

For decades, Universal Studios has been trying—and failing—to launch a remake of Creature from the Black Lagoon, Jack Arnold’s 1954 film about a half-man, half-fish defending his Amazon lair from invading scientists. Like King Kong before it, Creature updated the themes of Beauty and the Beast, and is best remembered for the erotically charged sequence in which the gill man performs an underwater ballet beneath an unsuspecting Julie Adams when she goes for a swim. Universal is advised to give up, because Guillermo del Toro’s sublime new film The Shape of Water, opening this Friday, renders the notion of such a remake moot in the same way Colossal did future Godzilla films.

Del Toro, who hails from Mexico, has an unabashed love for monsters and stylized cinema, and has mostly alternated between creating intimate, foreign language films like Cronos and The Devil’s Backbone and big-budget Hollywood films like Crimson Peak and Pacific Rim. The Shape of Water rivals his finest film, Pan’s Labyrinth, and is equally lyrical. This movie is his declaration that he can make a great film even within the Hollywood studio system. His love for the gill man drips from the screen, but he has much more on his mind than making a creature feature.

Sally Hawkins plays Elisa Esposito, a mute woman who works as a custodian at a military laboratory in 1961 Baltimore (filmed in Toronto). Romantic but romantically unfulfilled, Sally lives over a movie theater in an apartment next to a struggling commercial artist father (Richard Jenkins)  and seeks solace in the musicals they watch on TV (they represent the unattainable for he, because she cannot sing). At work, Sally encounters a captive “amphibian man” from the Amazon. Because the creature cannot speak, Sally feels an immediate connection to the creature, and the two improbably fall in love. The rest of the film follows Sally’s efforts to set free the fish of her dreams in a plot that hews closely to that of Splash, only with far deeper rewards.

Michael Shannon plays the heavy, a security chief who is an even more repressed and aggressive example of white male Christianity than the one he played on Boardwalk Empire. Octavia Spencer plays Elisa’s understanding co-worker, and Michael Stuhlberg a Russian scientist spy. Each supporting character embodies a different social concern in the narrative: sexual harassment in the workplace, the civil rights movement, homophobia, and the Cold War.

Del Toro’s film is a sophisticated fable for adults that does not shy away from the sexual implications of its primary coupling, and he uses his small ensemble much as Woody Allen has in period films like Radio Days, as guideposts to a romanticized bygone era. Hawkins uses expressions and body language to convey her emotions in the kind of performance for which acting awards were created. Doug Jones, already beloved by sci-fi and fantasy fans for his numerous bizarre characters, cements his place in the pantheon of great movie monster actors, using many of the same tools as Hawkins beneath layers of silicone and CGI. Paul D. Austerberry’s production design warrants mention, opulent whether depicting the oppressive lab, a cluttered apartment, or a diner that specializes in pies. Del Toro packs a lot into the two hour running time, including numerous valentines to cinema itself.