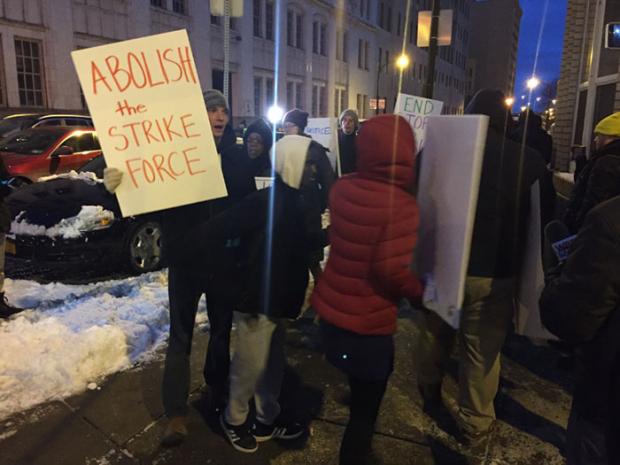 Dozens of activists braved the cold last Wednesday outside Buffalo Police Department headquarters to call for police accountability in the wake of the state attorney general report clearing officers of criminal wrongdoing in the death of Wardel “Meech” Davis. “Indict, convict, send those killer cops to jail, the whole damn system is guilty as hell,” they chanted. Other chants and signs called for the abolition of the BPD’s Strike Force unit, while members of the Buffalo Police, including several Strike Force officers, formed a loose perimeter around the protesters.

The attorney general’s investigation, headed by Alvin Bragg, was triggered in accordance to an executive order in 2015 that calls for the AG investigations whenever unarmed suspects are killed during police intervention. While the AG report revealed that no charges would be levied against officers Parisi and McAlister, it also raised major concerns about the nature of the investigation, while making several key recommendations to the BPD.

What happened on the night of February 7, 2017 outside 19 Hoyt Street is known by only two people, B-District officers Nicholas Parisi and Todd McAlister. No video exists of the event and no eyewitness came forward to give an account of that cold rainy night on a quiet, residential side street. One of the AG’s key recommendations is for the BPD to be equipped with both dashboard cameras and body cameras, neither of which are currently in wide use by city police. (A pilot program currently underway has eight body cameras on the streets.)

The medical examiner ruled the death a homicide; while Davis died of an acute asthma attack and had bronchitis at the time, his condition was exacerbated by the officers’ use of force.

Parisi and McAlister invoked their Fifth Amendment right to refuse being interviewed by the AG’s investigators, instead offering only a joint interview with both of them. Our partners at Investigative Post pointed out this cut against the department’s own policy that “all employees have a ‘duty’ to ‘extend their fullest cooperation’ to outside agencies investigating possible officer misconduct.” The AG declined the joint interview, due to a best practices standard and the availability of written narrative statements already completed by the officers.

We know that McAlister and Parisi were on the detail car that night, a special assignment often outside the purview of 911 call and response. On February 1, they had filed a detail car report claiming intelligence that the house at 19 Hoyt Street was an active drug house. City 311-complaint reports obtained by The Public did not show a record of citizen complaints consistent with an active drug house in the six months prior to the incident, and a prior attorney for the estate of Wardel Davis, Steve Cohen, claimed to have interviewed every tenant in the building and found no evidence of such activity.

Officers claim they saw Davis exit from the rear of 19 Hoyt, and while they also claimed to have seen hypodermic needles and empty glassine baggies on the ground along the side of the house, the AG report notes that no photographs were taken of these items.

According to the Parisi’s statement included in the report, the officers stopped Davis as he came out of the driveway at 19 Hoyt Street. The house at 19 Hoyt does not have a driveway. When they asked him if he had anything on him, they both reported he said he had weed. They decided to cuff him when he reportedly refused their commands to show them his hands. After he was arrested and searched, no contraband was found on him. The medical examiner included in her report that the officers physically restrained him out of fear he would attempt to swallow drugs, according to her interview with both two months after the incident. Neither officer included that kind of description in the statements completed immediately after the incident to explain why they had beaten him. Davis’s face was covered in bruises and cuts, and his eye was swollen shut. Officers claimed he took swings at them and resisted arrest, evading them several times, and that they needed to punch and strike Davis to gain compliance.Officer McAlister was treated that night for a sprained wrist and sprained finger.

Davis, by his own admission in an alleged text to a friend, was in the throes of respiratory distress before he encountered police, saying he was having trouble breathing and was headed to the hospital.

How much resistance could Davis muster, afflicted with bronchitis and minutes away from an asthma attack that would cost him his life?

One of the most interesting passages in the report involves an associate of Davis, a man referred to as Witness 3. Hours after Davis’s death, an aunt called Davis’s phone and Witness 3 answered, telling her that Davis had given him his knife and two cell phones because he was nervous about being stopped by the police. According to the narrative Witness 3 gave the aunt that night, Witness 3 was with Davis when the police stopped him, and the police told Witness 3 to leave. Witness 3 died on April 15 of an overdose.

What reasonable person intent on seeking emergency medical treatment would give a weapon and phones to a friend to avoid police arrest and then tell police that he was carrying marijuana, when no marijuana was ever found on his person?

To the activists marching in front of police headquarters, Davis’s arrest was akin to “stop-and-frisk,” the controversial police tactic popularized in New York City and later ruled unconstitutional. Signs and literature distributed at the protest linked BPD’s practice of checkpoints to department-wide violations of Fourth Amendment, and recently a legal advocate called Buffalo’s minority neighborhoods “a constitution-free zone.” The AG report made no critical finding on the nature and manner of the arrest, or the officers use of force. The ripple of this omission and the tacit approval of this manner of policing is still being felt by activists.

“It’s just incredible that the only evidence or testimony that the attorney general had to go on was some back and forth for four minutes when Meech was dying, and [the police] didn’t even comply with the investigation, they plead the Fifth, so all we have is some made up back and forth that there’s no recordings of,” Natasha Soto of Just Resisting told The Public at the protest last week.

Shaun Porter, the first of two area men who were tripped by police while handcuffed and being processed in the cellblock of central booking, penned an extraordinary letter reported in the Buffalo News on Tuesday. In that letter, addressed to US District Judge Lawrence J. Vilardo, Porter asks the court for leniency on behalf of cellblock attendant Matthew Jaskula, acknowledging that Jaskula has a young a family and is only a “cog” in the police system—“just the “tip of the iceberg.” Porter is evidently more concerned about the system responsible for his treatment. “I understand Mr. Jaskula’s conduct was tacitly approved by the city and the Buffalo police,” Porter wrote to the court.

Porter’s letter recognizes that while Jaskula injured him, two Buffalo Police officers, Joshua T. Craig and Anthony J. D’Agostino, stood by and did not intervene or report the incident. Both officers were suspended without pay for an unknown time period. The matter only came to light thanks to an unknown whistleblower inside the cellblock who tipped off the FBI the next day.

Porter is pursuing a lawsuit against the city in response to his treatment.

The video of the incident has not been made public despite the Buffalo News’s repeated attempts to pry it free in court. When the video of a similar incident last spring came to the attention of an assistant district attorney, the incident moved right up the chain to Erie County District Attorney John Flynn, who announced misdemeanor charges against Officer Joseph Hassett for assault and the filing of a false instrument in the form a fraudulent police report on the incident. Flynn brought the case into state supreme court last month after seeing charges of misconduct dismissed at a lower court.

That’s two recent incidents in which police brutality was not addressed by the BPD initially, then picked up by the FBI and the Erie County District Attorney. In one event, the offending officer allegedly lied on the police report, and in the other, two officers allegedly stood by and did nothing to intervene. The system of failed police accountability is exactly what Porter describes in his letter to the judge.

And yet the accounts of officers Nicholas Parisi and Todd McAlister about what happened to Wardel Davis are expected to stand alone, even though that account and the sequence of events around it is riddled with inconsistencies and head-scratching implausibilities, and even though they refused to be interviewed by the state’s top law enforcement office.