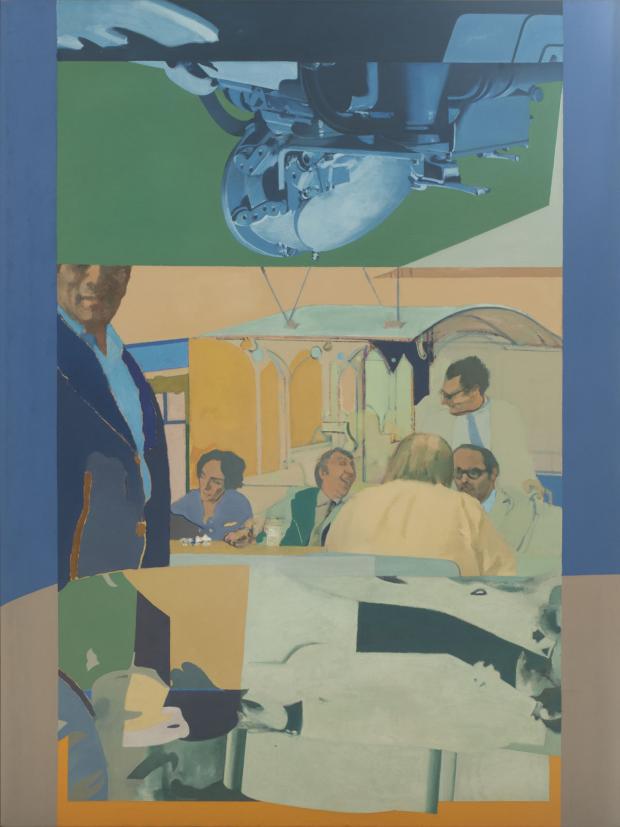 A few years after he started teaching at UB, in 1965, Harvey Breverman was awarded a fellowship from the Dutch government for a year’s stint as a painter in residence at the Royal Academy in Amsterdam, home of the Rijksmuseum, locale of world great collections of works by Rembrandt, Vermeer, Franz Hals, et al. At one point during that year, when colleague visiting artists were planning a trip to Italy to study and peruse Italian art for a while, Breverman chose not to join them, preferring to spend the extra time with Rembrandt and the other 17th-century Dutch masters.

A few years later, back at UB, Breverman became involved in the project and planning—with Gerald O’Grady and others—to establish a media studies program at UB, in the course of which he began hearing about and seeing and reading works of media—basically meaning film—artists and theoreticians inspirational to the media studies impulse. Most prominently, Russian filmmaker and theoretician Sergei Eisenstein. His seminal ideas about montage—basically juxtaposition or collision of disparate images and ideas in a kind of Marxist dialectical narrative progression via thesis, antithesis, and synthesis.

The two things—the preference and option for the Dutch masters over the Italians, and the interest in montage as a narrative technique—were of a piece.

If he had chosen to go to Italy, what he would have seen is art that could properly be described as classical. A style or mode of art in general distinguished by the virtue of clarity. Of line, of meaning, of the intention of the artist in making it. Another possible descriptive, heroic. At its acme best and most characteristic, the art of Michelangelo. The great example, the statue of David. Or alternative great example, God and Adam on the ceiling of the Sistine Chapel. Art that captures a moment of supreme and everlasting significance. (A little like some ideas about the function of photography.)

The art of Rembrandt and the Dutch masters by and large very different. Not classic in the full sense of classic. (An alternative term—though not a very good one—romantic.) Characterized by smoky line, smoky transitions, complexity, multiplicity, ambivalence effects. The great example—examples—Rembrandt’s lifelong project series of self-portraits. It’s not enough—or quite enough—to see just one of them. You have to see them all, or at least several. Because it’s a project about transience. And so mortality, the essential tragic (versus heroic) factor. (And so also, more like film than photography.)

Of a piece with Eisensteinian ideas about montage. As a narrative technique that first and foremost respects and honors complexity, and multiplicity, producing ambivalence effects (where clarity would be tantamount to oversimplification), and incorporating temporality, process, progression (whether or not equivalent to progress). Narrative as a fractured continuum.

The current superb exhibit of Breverman’s paintings at the Burchfield Penney gallery covers from the early montage effects period—early 1970s—to the present. Opening with a number of works in what he calls his “Discontinuous Sequence” series, as basically an alternative description of the montage idea. Multiple sketch-like renderings of UB faculty meetings regarding probably in some cases properly academic matters—launching the new media studies program, for instance—others surely about the anti-war turmoil enveloping the UB campus and community around that time. Including numerous impromptu portraits of many colleague faculty members at that time. Raymond Federman, Leslie Fiedler, Seymour Drumlevitch.

Among several faculty powwow smaller-format works in the exhibit entryway corridor, a large-format oil-on-canvas work and kind of archetype example of the montage genre, called Conference. Three figures, indistinctly portrayed, around a makeshift conference table—you get the sense of hangers-on after a called meeting of some sort—and assorted unidentifiable or barely identifiable items including a stepladder and what look like temporary partition walls in the foreground and behind the men at the table, and in the distant background—but from the main subject matter you had the sense of an interior setting, in a room, in a building—a landscape or seascape perhaps, indistinct, but pretty clearly exterior setting. And curious and mysterious above all, hovering overhead, over the main scene men at the table and adjacent items, what after some looking at and thinking about it seems to be a huge heavy equipment demolition project clamshell loader apparatus—of the sort that would be suspended from a crane—as if about to scoop everything up—the men, the table, chairs, the nondescript items—so as to haul it all off to the trash yards. Image of transience—it seems—if ever there was one. But to each his own interpretation is part of the point with this art.

Other series, other subject matters. In elaborations and permutations of the basic montage technique. A stunningly beautiful Holocaust commemorative series in a rich mix of somber darkish hues and shimmering reds and golds, and imagery including secular and synagogue architecture, copious fire, Jewish ghetto streetscapes, on fire, railroad tracks converging toward a concentration/extermination camp gateway transmogrifiying into what looks like a synagogue structure, on fire, scraps of Holocaust prisoner uniforms, barbed wire, and various enigmatic ancillary items, a prosthetic arm, and tefillin Jewish prayer ritual accoutrement. The model actual prosthetic arm and tefillin are in a vitrine along with some other occasional imagery items. Including a not-so-enigmatic in the context plastic German Luger pistol.

Another series of Jewish ghetto street scenes—buildings on fire as often as not—and related still lifes, called “A Finstere Medina,” which exhibit curator Tullis Johnson told me means “a dark place, a horrible place.” How Breverman’s grandmother described Poland under the Nazi occupation.

Another series in monotone orange consists of collage composite versions of the cities of Venice, Istanbul, and three Jerusalem examples, in each instance as if in a process of collapse and destruction. Substantial fires burning apparently out of control in multiple locations in the Istanbul and the several Jerusalems. No visible fire in the Venice, but what looks like Biblical fire and brimstone raining down from the sky. And a ghost image of Leslie Fieldler contemplating one of the Jerusalems, ghost image of Raymond Federman contemplating another. Sub specie aeternitatis, as it were. All things passing.

The exhibit is called The Contradictions of Being: Composite Works by Harvey Breverman. It continues until February 24.