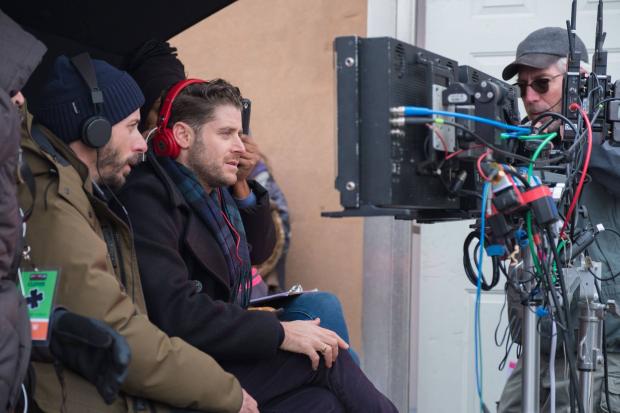 Director of photography Matthew Quinn and director Jon Abrahams monitor the action on the set of Clover, which wrapped a month of shooting in Buffalo last week. Photo courtesy of the filmmakers.
by
Gregory Lamberson
/ Dec. 19, 2017 8pm EST

Last Thursday, Senator Robert G. Ortt, who represents the 62nd District in the New York State Senate, introduced legislation to eliminate the New York State Film Production Tax Credit, an incentive program that benefits the entire state, including Ortt’s own Western New York backyard. (Ortt lives in North Tonawanda and maintains an office in Lockport.) Attacking the film industry subsidy probably seemed like an easy way for Ortt to make a splash without risk or repercussion. According to his website, which encourages New Yorkers to sign his petition, he is fighting to protect taxpayers from “Hollywood millionaires.” Ortt paints a picture in which taxpayer dollars go into the pockets of rich film producers, and uses moral outrage over Harvey Weinstein’s recent sexual abuse scandal (the program once issued funds to qualified Weinstein Company productions) to cloud the incentive’s real goal: generating revenue to the state and creating jobs. Governor Andrew Cuomo has been an advocate for the program, which makes it an appealing target for Republicans. What could be more attractive than opposing Cuomo and Hollywood at the same time? Our state faces a projected $4 billion deficit next year, so why not go after a $420 million program that actually creates jobs?

The New York State Governor’s Office of Motion Picture and Television Development introduced the tax credit program in 2004. Since 2011, film and television productions have generated an estimated $19.2 billion in revenue for the state and resulted in more than one million new hires. In 2012 Cuomo expanded the tax incentive, and applications for television series more than quadrupled. According to the Empire State Development Corporation, Western New York has the fastest-growing film industry in the state. If Ortt succeeds in repealing the tax credit program, he will not only harm the film and television industry in New York City but will virtually destroy the burgeoning film industry here in Western New York.

When I made my first Buffalo-based feature in 2009, there was little film production activity here: Only a handful of local independent filmmakers attempted commercial features, and out-of-town productions like Bruce Almighty with Jim Carrey popped in just long enough for establishing shots of the city and Niagara Falls. Some of us dreamed of building and working in an actual film industry in our region so we would not have to move away for employment opportunities.

Since then, the growth of film production in Western New York has been radical. Fred Olen Ray has filmed at least seven TV movies here, and the producers of Best Man’s Holiday hired extras to fill the football stadium. In 2017 alone, productions such as Cold Brook (directed by Cheektowaga native William Fichtner), Wolf Boy, The Purge 4, The Tomorrow Man, and the just wrapped Clover filmed here, one after the other, sometimes overlapping. We have an actual industry on our hands, all because of the tax incentive Ortt seeks to kill.

The New York State Film Production Tax Credit is an incentive from the state to entice film and television producers to shoot their projects here. In simple terms, it is a tax rebate designed to stimulate the economy and generate revenue. New York State offers a competitive 30 percent tax credit on qualified costs to films budgeted under $500,000, plus an additional 10 percent on qualified labor costs for higher-budgeted films that shoot in our region. It is important to note that qualified costs are “below the line” expenses which benefit the state: salaries for working crew people and extras, location and facility fees, set construction, catering and hotels, and purchases made from approved vendors. Qualified costs do not include “above the line” costs such as salaries for producers, stars and cast, writers and directors. In my experience, the credit amounts to approximately 20 percent of a film’s total budget.

On December 15 Ortt posted on his Facebook page, “This upcoming session is sure to be filled with difficult decisions. However, one easy decision is doing away with New York State’s $450 million Hollywood subsidy.”

Besides exaggerating the program’s budget by $30 million, this callous comment showed zero respect for, or even awareness of, the hardworking people in the Western New York film industry. I’ve worked on many film sets, and I have never seen any millionaires sitting on the foldout chairs at the crowded meal tables. There are 1,750 members on the Facebook page Buffalo Niagara Film Professionals Association, 3,343 members on the Western New York Actors Helping Actors page, and 4,036 members on the Buffalo Film Extras page. Even allowing for duplication, that’s a lot of voters who would be negatively affected by Ortt’s measure.

The benefits to the region begin the moment location scouts for a film arrive to see if our area serves their creative needs. These people are already paying for hotel rooms and meals when they meet with Buffalo-Niagara Film Commissioner Tim Clark, who personally shows them locations. If our area meets their requirements, the producers file an initial application with the governor’s office, and an advance team travels here and sets up shop in a hotel or in rented offices. Locals are hired to serve as production assistants in the office even during pre-production. The company often brings its key crew people in, like the cinematographer and production designer, but locals are hired in secondary positions. The more qualified people a production company finds here, the fewer hotel rooms it needs to book. Pre-production can last anywhere from two to eight weeks, and filming lasts 10-30 days. All of those out-of-town people are paid a per diem in addition to their salary, which they spend at restaurants, bars, and anywhere else you or I spend our discretionary income. This represents a huge boon to our area. Teenage Mutant Ninja Turtles: Out of the Shadows reportedly generated $7 million worth of economic payback to Buffalo, including the hiring of neighborhood residents for crowd control.

Ortt was recently quoted as saying, “The issue becomes: what is the economic impact? You always hear, ‘Oh, they stay in some hotels and then go to the restaurants,’ but how can we really quantify that? The impact would have to be pretty significant, in my view, to justify that program.” The production company behind Turtles rented more than 3,300 room nights at local hotels. How hard is that to quantify? After a film is completed, the producers submit a final application which itemizes every expense incurred: hotel receipts, restaurant receipts, ground transportation, payroll, etc., and accountants at the governor’s office audit the records. Again: How are these expenses hard to quantify? Ortt doesn’t appear to have done the research one would expect from an official seeking to decimate a growing local industry.

The year 2017 set records for film production in Western New York. For the first time, people I have worked with shoulder to shoulder on any number of productions are actually making a living here: camera people, sound people, electricians, office personnel, makeup people, art directors, production assistants. Because of the growing need for qualified crew, last year a wave of new people were admitted into Local 52 so they could work on union pictures. In May, I was one of several speakers at workshop sponsored by the Buffalo-Niagara Film Commission to teach film school graduates and other interested people the basics of production assistant work because the number of coming films required gaps in our crew base to be filled. Many of those people went straight to work on feature films. Villa Maria College and Niagara County Community College both recently implemented programs designed to teach students the basics of crew work—not to become writers and directors, but to become entry-level production assistants. During the last nine months, a friend of mine went from living at the poverty level to earning enough income on films that he and his wife are planning to buy a house to live in with their three children. These are the people whose livelihood Ortt’s political gamesmanship now imperils.

Ortt represents that repealing the New York State Film Production Tax Credit will impact “Hollywood millionaires,” but if he gets his way production companies will find their incentives in other states, or in Canada. Production will simply flee New York State, and Western New Yorkers who now make their living in this business will move elsewhere to do what they love. Western New York will lose all of the economic benefits it has seen from film production over the last several years. This isn’t about art or content, it’s about dollars and cents.

Gregory Lamberson is a local author and filmmaker.