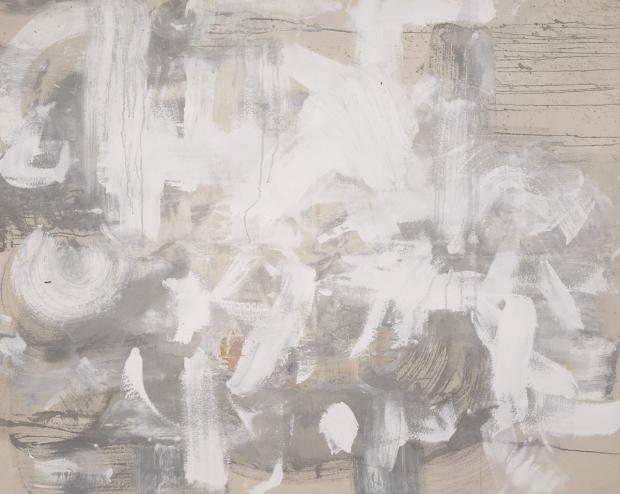 What Sarah Myers’s large-format new paintings currently on show at Eleven Twenty Projects seem to be saying is: “Where do we go from here?”

In another space at the same venue are some previous larger-format exquisite depictions of trees of various species, one tree per painting, and as if every leaf and branch accounted for.

The new works are very different. Gestural abstracts in broad brush strokes in every direction, and without identifiable imagery, except on occasion, when perusing a painting, you think you do decipher an image—human figure even, of sorts, in one case running, in another dancing—but admittedly may be reading this into the work. Not something the next person in line would necessarily recognize, or the artist acknowledge. Works in a stylistic or modal range from relatively simple and uncomplicated—relatively few brush strokes in white paint on neutral tone canvas—to painterly more complicated now in black and white, to messily complex, in a gumbo of well-mixed colors and highly energetic brushwork, and not enough distinguishable form to allow even reading in imagery.

A handout accompanying the new work talks about it as a kind of personal purification project. A series “about recognizing the inherent flaws in human nature, and striving for purity through commune with and respect for nature.” It says the artist “describes her process of painting as a way to recognize the evil in oneself,” and uses painting to attain “a symbiotic relationship with nature, to achieve as much of the purity of nature as possible in her interior self.”

That may be. Though hard to perceive personal motives and effects of such interiority in these or possibly any artworks. Yet purity does seem to be an issue in the works. Purity and its opposite, impurity. Both visually and materially, that is, in terms of media. Which are not just paint and canvas, but with an admixture in most of the works of items and elements not usually found in acrylic paintings, such as tree bark—in one case specified to be black cherry—pollen, black bean dye, maple leaf dye, linseed oil, oil paint, newspaper, coffee, and dirt. (Not named among the media, in one of the paintings I spotted a twig. Reminiscent of the paper match that used to be anyway in the large Jackson Pollock in the Albright-Knox. I don’t know if it’s still there. The last time I saw that painting—I always look for the match—I couldn’t find it.)

But copious impurities, as it were to mark the purity idea. Unless or even if the impurity items are really purity items. As nature items by and large. Tree bark, pollen, dirt, the twig. More natural than acrylic paint anyway. (Some of the admixture items questionable as to their natural character—the black bean dye, the maple leaf dye, linseed oil, and oil paint. But newspapers and coffee creditably natural, inasmuch as basic necessities of human life. Like air and water.)

Two anomalous abstract works seem figural in more than the fleeting, dubious way of the white on neutral paintings—the possible runner, the possible dancer. These in severe black on white or gray backgrounds. One seems to show two figures—possibly male and female—in conversation and/or incipient embrace. The other, three figures, possibly adult male and female and child.

Four new works also in the trees series—a basswood, an oak tree in the fall, changing colors, an unidentified species tree, and an apple tree branch with pink blossoms—in somewhat smaller format than the run of the previous tree paintings, but with the same meticulous—but never fastidious—representational technique. If purity is nature, and nature purity, these are purity works as much as or more than the recent abstracts advertised as such. The juxtaposition of the two kinds of work—representational and abstract—makes for a poignant study in artistic modes equivalence. Different routes to the same or much the same end.