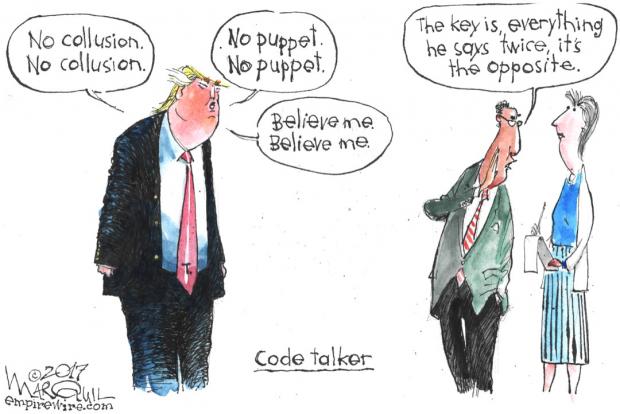 Yes, Trump is correct, there is a definite bias against the Republican Party. It’s called quantifiable reality. When accurately reported, we call it “truth.” And when people are exposed to truth and tellers of truth, they tend to turn against Trump and his loyalists. Truth, it turns out, is biased. Those exposed to it often think differently, become different people, and as such, vote differently. Neither truth nor the realities it supports are balanced. For the Trump team, reality is a motherfucker and has to be suppressed at all costs.

Journalists, when they do their jobs, report the truth. This puts the press part and parcel at the center of an anti-Trump conspiracy. By the very nature of their profession, they conspire to build on each other’s work, pick up where others leave off, and craft their reporting around growing bodies of evidence, growing like cancers on the dreams of fascists.

At the core of this truth-telling conspiracy are words. Without words journalists could not write or tell truths. We’ve already established that truth is biased. So where does this leave words? Words are the ultimate enablers that allow seditious truths to spread and, history has shown, topple empires of lies. Words are the real threat. Without them, there wouldn’t be language or journalism, hence truth would be quarantined in dark silent hollows where it couldn’t wreak havoc.

Republicans have long understood the power and threat that words bear. In 1996, their Speaker of the House, Newt Gingrich, having two years earlier co-engineered the Republican takeover of the House of Representatives after four decades of Democratic control, declared a war on language. As leader of the congressional Republicans, Gingrich was tasked with engineering the first reelection of a Republican House majority in almost seven decades. His strategy centered around remixing language with an Orwellian bent.

For the 1996 election, Gingrich authored a memo from GOPAC, the Republican Party political action committee, giving identical talking points to all 435 Republican candidates for Congress. In the memo, Gingrich issued 64 words or phrases that his candidates should use when describing themselves, and another 64 for describing Democrats. Among the “we” words Republicans were to use to describe themselves and their agendas, were “proud,” “strength,” “moral,” “legacy,” “pristine,” “freedom,” “liberty,” “crusade,” “challenge,” “reform,” “control,” “principled” and “tough.” Core to this vocabulary was “we/us/our,” as a thinly veiled gloss for white, white, and white—as in a revival of Richard Nixon’s race-mongering “Southern strategy.”

Newt Gingrich is a Steve Bannonesque sort of reptile. His edicts often lack refinement and, in the hands of amateurs, can create problems for users. This can range from the embarrassment associated with using infantile rhetorical constructions in public performances to disaster, as when George W. Bush in 2001 declared a “crusade” against terror without having any historical understanding of the word or, apparently, the Crusades. European leaders panicked, seeing the comment as igniting a modern-day clash of civilizations, as it very well might have done.

Midway through the George W. Bush presidency, Republican strategist and pollster Frank Luntz, who played a significant role behind the scenes helping Gingrich with his mischief in the 1990s, rose to prominence as the person tasked with bringing Republican wordsmithing to the next level. Toward that end he set out to remix English to craft a new language specifically designed to support and promote Republican agendas, minus the troglodyte overtones of Gingristic GOPbable. With all due respect to its simple Orwellian origins, we’ll call Luntz’s creation “GOPspeak.”

Luntz, apparently feeling defensive during a 2007 interview with NPR’s Terry Gross, explained that “to be Orwellian is to speak with absolute clarity, to be succinct.” This Orwellian irony underlies the unspoken premise of GOPspeak—to craft language that is both clear and succinct, while being misleading if not outright false.

Warming up to fight death tax

One of Luntz’s proudest moments came when he launched the campaign to rename the estate tax as the “death tax.” Admitting that every industrialized nation has some sort of an estate tax, and such taxes are not generally controversial, Luntz once proudly explained during a televised PBS interview that the tax is implemented at death, and hence it’s technically “a death tax.” And he’s onto something. A death tax sounds awful. That said, a tax that only impacts the wealthiest 0.15 percent of the population is suddenly opposed by every Duck Dynasty fan in the nation.

Luntz is also responsible for having Republicans remove the phrase “global warming” from their vocabularies and replace it with “climate change.” After a memo from Luntz, Republicans adopted the new language instantaneously as a school of fish changes direction. The terms are actually similar. Carbon emissions accumulate in the atmosphere, causing the greenhouse effect, which causes global warming, which in turn causes climate change. Global warming is the cause, climate change is the effect, though the nuances here are lost on most of us who, as non-scientists, use the terms interchangeably.

Luntz, however, in focus group testing of the two phrases, found “climate change” to be less frightening to the public. Its rollout was spearheaded by Fox News, Republican think tank wonks, and Republican politicians. The goal was for us to not be so frightened and hence slip into complacency with regard to the most threatening environmental condition to face humanity, whatever you call it. Words do matter.

The skinny here is simple. The Republican Party is sponsored by the fossil fuel industries. So global warming becomes climate change. The subtle difference might not mean much at the end of the day, but it shows the oil industry that their Republican assets are trying their best to be loyal lap dogs ready for their next round of treats. Luntz also urged Republicans to eschew the term “oil drilling” and replace it with “energy exploration.”

No climate change in Florida

Fast-forward to 2015, when the Miami Herald reported that Florida’s Republican administration ordered the state Department of Environmental Protection not to use the terms “climate change” or “global warming.” This is quite difficult for an agency tasked with drawing up plans to respond to the impacts of the aforementioned precursor and effect, both of which seem to be continuing unabated and undeterred by GOPspeak. For good measure, the Florida government also banned the word “sustainability.” The Herald’s report caused some political backlash, and Floridians, faced with the increasing effects of that thing that we don’t talk about, continued to use the banned terms.

By August of this year, the British newspaper, The Guardian, obtained and validated emails from the Trump controlled United States Department of Agriculture’s Natural Resources Conservation Service, telling its staff to avoid the term “climate change” and replace it with “weather extremes.” As in, I guess, shit that just sort of happens with the weather.

The Republican assault on language shows no signs of abating. For the past two months, almost every mainstream media outlet in the country at one time or another referred to the proposed Republican tax plan, possibly the largest single act of wealth redistribution benefitting the ultra-rich in the nation’s history, as the “tax cut.” This comes despite the reality that in all of its proposed forms, it always crunched out as a net tax and fee increase for many working Americans over the next three years, making “tax cut” a toxic misnomer.

Our lexicon is littered with the detritus of Republican propaganda efforts. “Fake news,” a term that once actually referred to fake news, is now GOPspeak for reporting any reality embarrassing to Republicans. “Truth” on the other hand, is GOPspeak for mistruths that support the Republican agenda. “Moral values” is kind of like, who would Satan hate? “Liberals” are people more concerned with reality than with being great. “Great” is a nostalgic GOPspeak term for white privilege.

In what is perhaps their most audacious attack on a word, Republicans have been waging a campaign in earnest since the Reagan era to rename the Democratic Party. In a “who’s your daddy?” move, Republican wonks have been obsessed with calling the Democratic Party the “Democrat” Party. This silliness is sort of like Luntz’s global warming to climate change play. Six of one, half a dozen of the other, yes, but focus groups liked it.

“Democrat Party” just seems like an illiterate grammatical mangle of the name of the Democratic Party. The New Yorker, in 2006, recognized it as a “slur,” however, and “an attempt to deny the enemy the positive connotations of its chosen appellation.” Old school conservatives like William F. Buckley Jr. eschewed the term, seeing it as an attack on language. Diuretic orators on right-wing radio, GOP assets on Fox News, and the white supremacist blogosphere, on the other hand, can’t help but vomit their creepy “Democrat” misnomer all over their mics and keyboards. With old school conservatism all but dead in the Republican Party, such immaturity now passes as discourse.

And yes, Frank Luntz did focus group the term “Democrat” Party in 2001. The only measurable effect the name change seemed to have was to annoy Democrats. The only dividend from deploying the term was its trolling value. Hence, the term is used by trolls who, ironically, out themselves as partisan operatives and undermine their own propaganda powers by using it. But like middle-of-the-night tweeters, they just can’t help themselves. Trolling and bullying now seems like central tenets in the Republican agenda.

At the end of the day, much of GOPspeak is about trolling and annoyance. Last week, according to the Washington Post, the Trump administration ordered the Centers for Disease Control (CDC), the agency that supposedly protects us from everything from Zika and mad cow disease to zombie outbreaks, to stop using seven words in budget documents. In what appears to be a trolling move designed to divert our attention away from more hideous matters, they banned the use of the words “vulnerable,” “entitlement,” “diversity,” “transgender,” and “fetus,” and the terms “evidence-based” and “science-based.” But this is more than trolling. If you can’t use these words in budgets, you can’t budget to protect the people and groups those words describe, nor to pursue empirical evidence and conduct science-based research.

Put in practice, the agency responsible for protecting vulnerable populations cannot call them “vulnerable.” Maybe terms like “susceptible,” “weak,” “assailable,” “defenseless,” “unprotected,” or “sitting ducks” aren’t banned. Or maybe the target is the whole concept of government serving rather than just taxing and controlling people in a state of perpetual conflict. Evidence-based? Fuck that. Evidence is biased. We’re fair and balanced.