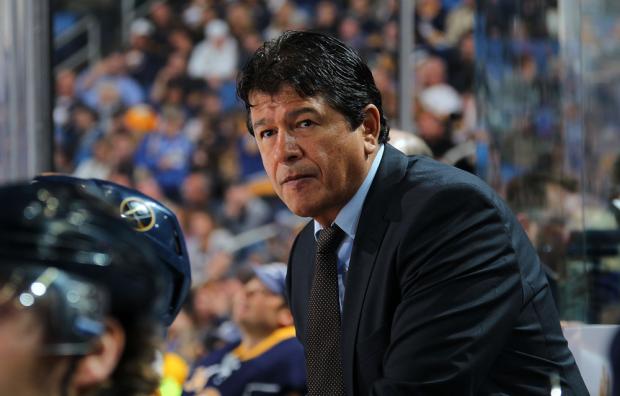 If your strategy for the great “suffering” was to ignore the Sabres in hopes they finish dead last and pick between two veritable studs at the top of the next draft, keep doing so. Because the Sabres are on a tear and coach Ted Nolan is intent on destroying your dreams of decrepitude.

The Sabres have put ten of their last fourteen in the W column and have climbed out of the basement to within four points of eighth place. You might be tempted into thinking this might be a playoff team after all, that Nolan, who famously took a ragtag Team Latvia into 1-1 second period tie against the titanic Team Canada last year in Sochi, might be coaching the blue and gold up to reach beyond themselves and achieve greatness. Don’t be.

You can’t take any thing away from Ted Nolan. He’s already had pretty much everything taken from him in his most bizarre career in coaching. He has the team overachieving, playing for each other, working hard, and being more mentally tenacious. He’s also riding the hot goaltending of Jhonas Enroth and getting scoring from all of his lines. With Nolan’s near messianic return to Buffalo and the NHL last year, the disaffected fan base still hungover from the former GM’s bungling dismantling of a proud team got an instant shot in the arm.

The renewal metaphor is a little tired these days in the Queen City. It’s not a Buffalo thing, it’s a human thing often provided by sports: we all love a good redemption song and Nolan was like our Bob Marley singing “no Pattie, no cry.” But LaFontaine got the ax mysteriously and the first petal came off the rose.

Of course Nolan took it personally. The Hall-of-Famer recruited Nolan from a far corner of the world to return to a city where he won Coach of the Year a generation ago, just before meeting his own mysterious ax in 1997 at the hands of the dragon LaFontaine had just triumphantly slayed a year ago. Nolan’s has burnished his reputation as a player’s coach, a motivator. Players often talk about Nolan’s genuine interest and concern in their well being and in their families. That’s stuff you can’t fake (though I have my doubts about Pete Carroll in Seattle) so of course he was bitter to see an old friend forced out of the organization.

There were many moments in the season’s first few weeks where the Sabres couldn’t muster a shot on net, let alone a goal. They lived in their own end and made the goal light operators across the land earn their pay. In the last dozen games, they’ve managed to knock off front runners like the Montreal Canadiens, the Tampa Bay Lightning, and the defending champion Los Angeles Kings. They’ve scored clutch goals late, carried the team deep into dramatic shoot outs and have come out on top. They’re playing tougher, scoring a little more, and are generally more fun to watch.

But they’re fooling exactly nobody. They have the lowest average goals scored per game at 1.81, and it’s a full .3 under the Carolina Hurricanes at 2.10. But where they’re really getting pounded is in their shot differential. The opposing team takes an average of 12.7 more shots a game than they do. The next closest stinker is Columbus at 5.7! Even if you want to call the first two months of the season a mulligan, the Sabres are still the worst team in the league in terms of shot differential at -10.9 (New Jersey is at -7.8). Enroth may be hot, but he’s seeing more rubber than the Galleria parking lot and you can bet on the trend resulting in losses, glorious losses. Let’s call the team’s recent play a special gift for fans in time for the holidays: peak Sabres. It’s all downhill from here friends.

Behind the scenes, GM Tim Murray is open for business and ready to deal anyone for futures. The problem is that league-wide middling teams who could use help now are weighing their chances to win this season against their potential to tank in attempt to land the generational talents of eighteen year-olds Connor McDavid and Jack Eichel. It’s all setting up for one of the most epic fire sales in league history that is all but guaranteed to forever change the way draft picks are awarded to teams. We’ll most likely see Murray deal forwards Chris Stewart and Drew Stafford for closer to nothing than anyone might think. And it should surprise no one if Murray deals Enroth to a top team with a suddenly gimpy goalie. There’s probably only a few players on the team who are safe: the kids (Girgensons, Zadorov, Ristolainen, Reinhart), Tyler Ennis, and maybe Marcus Foligno.

Short of benching Enroth or trying to get Ted Nolan to emulate Ron Rolston, the Sabres are stuck for now, winning games and screwing themselves out of a potential franchise-changing draft pick. It’s hard to watch them lose, but it’s getting even harder to watch them win.