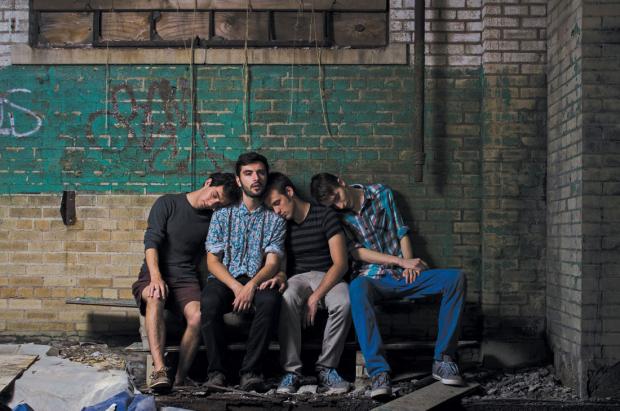 There’s a certain tone you’d expect from an album recorded in a liquor store basement. Brimstone Blondes’ AGE OF CONSENT harnesses the productive buzz portion of a bender; when ideas flow freely and chemistry magically manifests. Hear for yourself at Sugar City’s Chanukah Bonanza blowout on at 8pm on Monday, December 22, which also kicks off the band’s Red, White and Blonde Xmas Tour.

The Buffalo-born quartet is a serious musical endeavor once perceived as something less, making AGE OF CONSENT (Admirable Traits Records) all the more compelling since it’s exactly what the title implies: a rite of passage.

“There’s a double entendre,” frontman Matthew Danger Lippman explained during a recent phone call. “We never felt taken seriously because of our age, and we figured this was a nastier, much more in-your-face punk record that celebrates reaching our age of consent as a band. And yet, a lot of the songs revolve around the weird nuances of consent: realizing the hollowness of hookups, the hollowness of party culture. There’s a realization that you no longer fit into the scene, that you used to be a funny kid but that now it’s not cute anymore. Now you’re just a prick.”

Brimstone Blondes have channeled their collective coming-of-age bummer into something both defiant and fun. AGE OF CONSENT references the original NYC Bowery punk bands while capturing the resounding “meh” that comes with realizing adulthood looked better on the cusp.

Despite having been up for twenty-six hours dealing with final exams, Lippman walks me through the album’s oddball assortment of influences as documented on the band’s bandcamp page.

Listening to R. Kelly’s “Ignition (Remix),” drunk and alone on a frigid Saturday night
“Our song “Afterparty” has an interpolation of that lyric, “…after the show it’s the after party/And after the party it’s the hotel lobby.”  R. Kelly’s a genius and I love that song, but hearing it at tons of parties last year really amplified the feeling of being lonely and drunk in a crowd, being at odds with everyone, and that something’s definitely wrong . “Afterparty” goes down a different road with a sad, neo-country-punk sound.”

The horrors of rural Pennsylvania
“I spent a year at Alleghany before transferring to SUNY Purchase. I was thinking about the exotic names of some of these rural towns but how they’re actually desolate and sad. It ties into our song “Lithuania, PA,” with this fleeting idea of going someplace adventurous and how that sours so quickly. The State of Pennsylvania now terrifies me… lots of confederate flags and guys with Insane Clown Posse tattoos. I may as well be in a third world country.”

Prince’s Dirty Mind
“Alex Mersinger—our bass player—loves punk… But when he discovered Prince, it changed the band’s direction. The bass got funkier and more pronounced; Prince took over our rhythm section. My writing about romantic/sexual concepts reads like a dark inversion of Prince, but I’m much more neurotic, like early Elvis Costello. So there’s this neurotic approach to being sexual, coupled with his funky influence, on this record.”

The Coalition for a Smoke-Free City
“We have all these people only doing things for show in this “hookup generation,”  smoking being one of them. I was being sarcastic about the Coalition, maybe throwing people off, because I think it’s a dumb idea. But at least it requires an all-or-nothing stance: there’s no half-stepping going on, nobody’s involved in it just for appearances.”

The Disaster Artist by Greg Sestero
“It’s a book by actor Greg Sestaro about his experience making the movie The Room, which conventional wisdom dictates was one of the worst movies ever made, but that we hold as an accidental masterpiece. Both in song and in reality, I have an innate obsession with nostalgia and the feeling that something is lost in my current life. The book really touches on that, ‘best laid plans’ and all.”

Xavier: Renegade Angel
“I think the show just fuels my inner anarchist. It’s like the TV version of “L.A. Blues” by The Stooges. Jacob Cohen thinks it signifies the decline of American culture, which is another excellent example of how he balances the band. Joe (Rambell) and Alex are self-taught. I had guitar lessons in sixth grade, but Jake is a classically trained violinist… we need that anchor.

“Bangerz” by Miley Cyrus
“Modern indie rock is so apologetic and humble, bland and whitewashed…skinny guys staring at their shoes, refusing to engage. I feel like trash rap and pop stars like Miley bring a level of excitement back to music. I want to inject more of that into indie culture, which feels like it’s totally lost its spirit and become a hipper-than-thou contest. I wanna be out there wearing lipstick and being way more obnoxious than everyone else.”