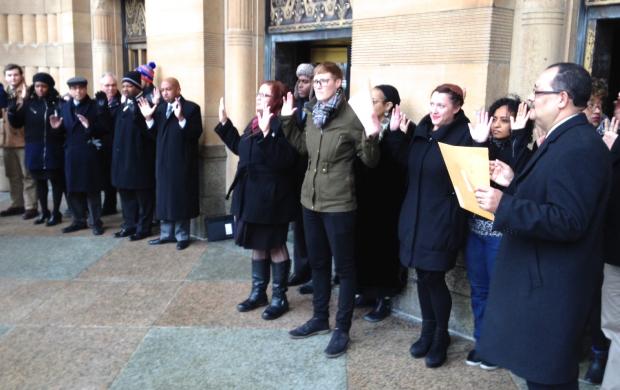 The protest action was scheduled for noon, but at about two minutes past, the only things standing on the cold and raw steps of City Hall were media, their tripods, and a small clump of city workers out smoking. When asked if the workers were part of the walk-out, one replied, “Walk-out? No, man. Taylor Law. I walk out and then I don’t have a job and the police will be beating on me. I’m just on lunch, man.”

At 12:05, an assemblage of council members Pridgen, Rivera, LoCurto, and Wyatt and their staffs and those of a handful of other elected officials–led by Harper Bishop from LoCurto’s office–filed through the revolving doors with their hands raised and set up in a phalanx in front of the waiting cameras. The protest was organized in solidarity with the recent demonstration by elected officials and their staffs: last week’s walkout of Congressional staffers and the die-in action of New York City Council Members in response to a lack of indictment in both the Michael Brown and Eric Garner cases.

Reading from a prepared statement, Bishop kicked off a plea for “meaningful, systemic change” through a megaphone into the swirling winds. “Today it is not just the deaths of Michael Brown and Eric Garner that we mourn, it is the sobering statistic that every 28 hours a black man is extrajudicially killed in the United States.”

Council President Darius Pridgen “I want to say that the Common Council did not start this movement today. It was the staffers. And I don’t mean it was the black staffers, the Latino staffers, it was all staffers that wanted to come together…I’m choked up for words, to be part of such a Common Council.” More substantively, Pridgen offered they were reviewing “local data” and looking forward to “a new era of policing across the country and in in the city of Buffalo.”

Council Member David Rivera, an former police sergeant chair of the Police Oversight Committee took a crack at the bullhorn as well: “Let’s take a close look. We don’t want to repeat the mistakes of the past. We’re concerned about our judicial system dealing with indictment and grand juries. We want to restore justice in this country, above all things.”

Spoken to just after the event, Rivera was asked about the how the BPD was taking recent criticism. “It’s hard not to take the criticism personally, especially the police officers that are doing a good job. As a result of all the media attention aimed at police departments and their misconduct, it kind of tarnishes the whole police department.”

“If the public is not trusting [police], it’s hard to get the information [police need to do their jobs]. Right now we’re trying to restore that trust. We’ve had a series of meeting and we’ve brought the public in, representatives of the [Buffalo Municipal Housing Authority police], the BPD…Get them all together and try resolve some of these issues And certainly we need to acknowledge we have many police officers doing great work out there.”

Rivera was open-eyed about the wider problem, “It’s not just the police departments; it’s the lawmakers it’s the non-indictments, it’s the prosecutors, it’s the Department of Justice, the judicial system itself. It’s hard to believe there were non-indictments when we have video right in front of us.”

Asked about BMHA and Open Buffalo’s Franchelle Hart mentioning of “stop and frisk” complaints, Rivera stated it came up last night at the community forum on policing at Mt. Olive Baptist Church. “You have to have probable cause. You can’t just stop and frisk people. If they’re doing it, it is wrong and you should call somebody.” Asked if last night was the first time he’s heard complaints about BMHA police, Rivera said, “I really haven’t heard it much, most of the complaints we’ve had regarding police misconduct have been complaints about excessive use of physical force.”

After the crowd had dispersed into the cold wind, the city worker had returned to his perch, cigarette in hand. “Still on lunch, man, haven’t walked out. Yet.”